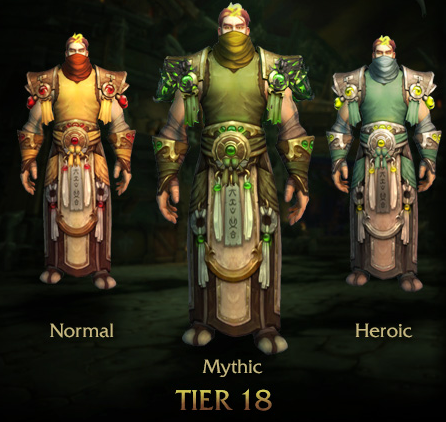 Tier 18 is an incredibly powerful tier set and you should prioritize the 4-piece bonus above all else.

Expel Harm now has no cooldown when you are below 50% health in Stance of the Sturdy Ox.

This is the same as the passive ability we already have to remove the cooldown of Expel Harm when we drop below 35% health, only better.

Every time you use Expel Harm, the remaining cooldown of your Guard is reduced by 5 sec.

The four piece alone reduces the cooldown of Guard by 10 seconds if you use Expel Harm on cooldown. Combined with the two piece, and having a spikey health pool that frequently drops below 50% will actually increase our survival.

With these bonuses, you’ll want to Expel Harm frequently. You might even want to cast it on cooldown when at full health. However, it’s still wise to hold Expel Harm if you know you’ll need it soon. You will also want to prioritize Expel Harm over ox orbs. Ox orbs are still valuable healing and should be used when needed, but you’ll get all those cool extra benefits from Expel Harm.

This isn’t an incredibly powerful bonus, since energy regeneration (haste) is our least effective method of defense. Normally I wouldn’t recommend trying to attain it, except that four-piece is still worthwhile. If you can get two pieces that have decent stats, like the hands and shoulders, then go ahead and get this bonus. Otherwise, don’t drop good stats for it.

When clearing Moderate Stagger with Purifying Brew, you generate 1 stack of Elusive Brew.

This is a decent bonus, worth getting as long as you’re not downgrading gear to get all four pieces. You can also opt out of getting this bonus in favor of gear with better stats, if that’s what you would rather have. This bonus is strongest when you’re not already generating tons of Elusive Brew, which means that it’s stronger with a mastery/versatility/multistrike build than a crit build.