This is a huge change to tanking trash. Basically, every major crowd control will act like Sap. Using a crowd control will disable the target for the expected amount of time, and once that time runs out the target will continue to ignore the caster as if nothing had happened. I believe The Daily Blink summed it up quite well.

For bears, the change will be very minimal. We lose a tiny bit of attack power and therefore a tiny bit of our Savage Defense shield. I think we will lose around 900 AP in a fully buffed raid environment, which accounts for about 5% of my AP (unbuffed by Vengeance). That’s pretty insignificant. Especially considering the buffs bears got in 4.1, we won’t notice the difference.

For cats, I’m a little more worried, though it is still not a big change. Cats will lose around the same about of AP (900), though (obviously) they care more about a dps loss. That amount of attack power is a drop in the ocean of raid-buffed cat AP, but cats are already one of the lowest melee dpsers and a slight nerf won’t help that position. It’s not the end of the world, but here’s hoping that this is Blizzard’s chance to buff kitties slightly. (C’mon Ferocious Bite buff!)

Not huge, but this is nevertheless our primary crowd control ability. It’s always bothered me that Entangling Roots could break from its own damage, and that it could break other crowd control. Now you can root the sheep in PvP and your teammates won’t hate you forever! They’ll still hate you for Cycloning the kill target, but we can’t have everything.

This is a huge nerf to caster druids’ Innervate when it’s used on another player, and I can’t imagine Innervate swapping to continue like it does now. For feral, this could be seen as a very, very small buff. My innervate currently gives around 5k mana to someone.  As long as our target has more than 100k mana, we will be returning more mana to them after 4.2. Not a lot more, though it is something.

Wowhead has some datamined set bonuses available, and feral is looking very good.

I’m not the best person for analyzing the cat bonuses. I’ve been following The Fluid Druid blog and forums for that.

For bear, the two abilities that contribute the most to our dps are getting 10% extra damage as a small, short dot. Sign me up.  Unlike the T11 2-piece bonus, which buffs the weakest component of our weakest attack (10% dot damage on Lacerate, ugh), this one is actually amazing. My napkin math says this will be about a 7% dps increase; pretty good for a tank. In comparison, I’ve read that the cat bonus is only about 2% dps increase.  We’ll have to wait until the sets get some testing and use before we find solid conclusions, but this initial glance at offensive bear bonuses leaves me excited.

The four piece bonus for bear is simple and beautiful — more dodge on an ability we use almost on cooldown. If you use Barkskin every minute, that averages out to be a 2% dodge increase. That’s a very strong bonus.

Overall, it looks like bears will be using T12 as soon as we can get it. I have a hard time believing that the secondary stats on T12 will be bad enough to nullify the dodge bonus on Barkskin. Now let’s hope the gear looks awesome, and that the rogue-inspired off pieces we will be wearing don’t clash too badly. 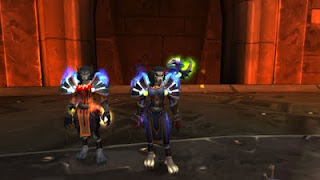 Maybe in Firelands we will lose our rogue twins!

Sometime last week Blizzard announced that Fandral Staghorn will drop a feral staff that turns the user into a fire cat. This spell, Druid of the Flames, looks to be that effect. Unfortunately, it is only effective in cat form. No fiery love for the bears.