Macros are necessary for simplifying many aspects of the game, so even though they make for very boring blog posts, I’ll suck it up and write one like a good bear. I use macros for condensing multiple similar spells into one button and for removing the less-interesting decisions from my to-do list. I don’t approve of complex cast sequence macros for ferals because they can easily mess up and they can never replace your own brain power. They’re both lazy and inefficient, and never even work well with bears or cats.

With that in mind, here are the macros I do use, for both bear and cat. 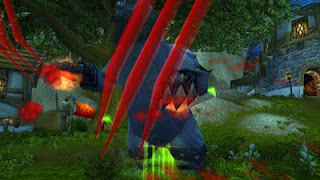 These two macros add Maul to the same button press as Mangle and Lacerate (remember that Maul is off the global cooldown, so you can hit it at the same time as other abilities). If I hold down a modifier key (shift, ctrl, alt), then Maul is not used, so hold down shift (or any of the others) at the beginning of pulls and when you have low rage. This macro is most useful if you spend most of your time raiding and therefore usually have infinite rage; if you spend most of your time tanking heroic dungeons, you might want to switch the modifiers around so that you Maul when a modifier key is held down.

If you do both raids and dungeons on a normal basis, try this macro suggested by Bob Jones in the comments. All you need to do is equip a tabard whenever you’re about to run a five-man and Maul will be automatically turned off in this macro.

This macro is a special case, and related to the two above. There are some times where I need to spam Mangle but still have low rage, or times I need to move and can’t easily hit the shift key, so I have another button devoted to Mangle with no Maul. However, I set the icon as Maul so I can track the cooldown. This macro basically serves two purposes: what I spam at the beginning of Berserk, and a way to watch Maul’s short cooldown.

This macro combines Growl and Challenging Roar so that your taunts are on the same button. Press the proper key by itself, you will perform a regular taunt, add shift, you will AoE taunt. 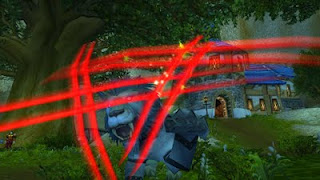 These two macros are used simply to condense similar abilities onto one button. The first is for finishers, with Maim being the default ability (because if you have to use Maim, it’s usually critical to be able to use it ASAP) and Ferocious Bite being available if the shift key is pressed.

This next one is Shred with an extra Ravage if you hold shift. Combining these two is extremely useful if you are specced into Stampede, since that grants you the ability to use Ravage in the middle of a fight. Note that this macro will work best when you have 2 points in Stampede, because it applies to both normal Ravage and Ravage! (the proc). However, if you have only 1 point, you’ll need to use “Ravage!” (with the exclamation point) in the macro instead. 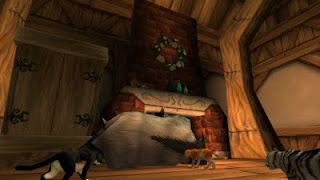 These macros combine similar bear and cat abilities into the same button. The skill they use depends on what form you are currently in. For reference, Stance 0 is caster form, Stance 1 is bear form, Stance 2 is Aquatic Form, Stance 3 is Cat Form, Stance 4 is Travel Form, and Stance 5 is Moonkin Form.

This macro simply casts the proper version of Stampeding Roar.

And the same for both versions of Feral Charge. 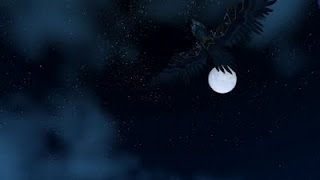 These are simple macros that modify normal shapeshifting. The first one casts bear form only if you have the resources and ability to enter it (that’s what the “!” means). This is useful if you’re trying to shift out of and back into bear form quickly, as it won’t leave you in caster form because you hit the button during the global cooldown or ran out of mana. In other words, while the default bear shape shift puts you in bear form if you are not in bear form, and removes bear form if you are already in it, this macro will always leave you in bear form.

Same thing as above, except with cat.

I use this macro when I need to enter caster form. With the “!” macros above, you need an easy way to put you in caster should it be required.

This macro makes your bird form do a flip if it’s resting on the ground, or if you’re in cat form it makes you roar. It’s a little-known secret, use it well.

Believe it or not, sometimes I do things in caster form. The first macro combines two skills that I often use in PvP, Hibernate and Soothe.

Mouseover macros are extremely useful for instant cast friendly spells, here’s an example of the one I use to decurse. 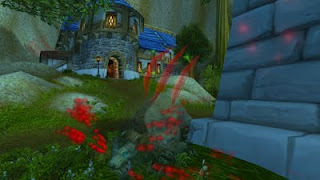 Engineers have special glove enchants that grant a primary stat (agility for us feral folk) once a minute. Enrage also has a one minute cooldown, and grants 15% extra damage if specced, so it is logical to combine the two. The line “/use 10” activates your gloves.

Similar for cat, I macro my engineering gloves to Tiger’s Fury. It’s a 30 second cooldown, so the gloves won’t be up for every one, but they’re up for every other.

Those are all the macros I use as a feral druid. Are there any other macros out there that are good for cats or bears?