Last week I gave some advice to the author of a 4.2 bear post: “The Frenzied Regeneration Glyph is absolutely necessary for raiding bears”. 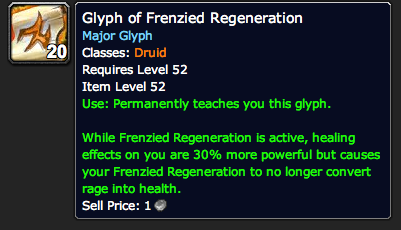 A few days later, another commenter contested that statement. His argument was that, at more than 3k at tick, an unglyphed Frenzied Regeneration contributes more to your survival than the glyphed version, especially given how much healers have to move or stop casting. While 3000 health per second is not enough classify as impressive healing in my book, it made me think. Is unglyphed Frenzied Regen actually better?

How much healing do our healers need to do to justify the loss of healing 30% of your health over 20 seconds?

Unglyphed Frenzied Regen scales with your health and its own 30% health bonus. Assuming you have rage, it will heal you for 1.5% of your health every second for 20 seconds. It will consume 200 rage in the process. It can critically hit, though the crit rate is based on your spell crit.

Figuring out how much health unglyphed FR heals on average is easy. It depends on your base HP and your spell crit chance, and multiplied by how much it increases your health (1.3) and how much it heals (0.3). The equation to find out heals is:

This equation can be simplified down to:

Glyphed Frenzied Regen scales with your healers throughput and the number of healers on you. These numbers can be difficult to obtain. Theoretically, the equation to find out the amount of heals per second you gain with the 30% healing buff is this:

You can look at World of Logs and see how much total healing is done on you, but that’s dependent on fight mechanics. You also have to factor out shields and Savage Defense, which aren’t buffed by the glyph. If you look at this chart, my average heals per second (factoring out SD) during our most recent H Shannox 25 kill was about 13,500. If I have this much healing while Frenzied Regen is active, my extra heals per second would be 4,050.

However, this just gives you the big picture, and how many heals you received during both the good times and the bad. Assuming you use FR during the bad times, what are your extra heals per second then?

What does this all mean?

For a bear with an average health pool and spell crit chance, unglyphed FR will heal about 4,000 health per second. For glyphed FR to out do it, your healers must be healing you for more than 13,300 health per second while you have FR active. Keep in mind that both these numbers will change depending on how much health you have.

That leaves the two options very close in many situations.

Basically, it all depends on when you want to use Frenzied Regeneration. If you use it while your healers have to move or are out of range, then you want to keep it unglyphed. If you use it because you just took or are about to take a huge chunk of damage and you’re confident your healers are spamming on you, then glyph it. Of course, this varies from fight to fight.

For example, for a fight that calls for a large of amount of movement or raid damage, like Al’akir, unglyphed Frenzied Regen might be optimal. For a fight that is mostly stationary but with lots of damage on you, like Nefarian, you might prefer to glyph it.

A 10 man tank, because he will have fewer healers available, will favor unglyphed FR more than a 25 man tank. However, even a single healer can cross the 13,300 hps threshold, so the same considerations apply.

There are some restrictions, too. For example, if you don’t have the full 200 rage to fuel an unglyphed FR, then its usefulness drops dramatically. Even in a 25 man raid environment, I have problems with rage starvation when I used unglyphed Frenzied Regen. It requires that you cancel a few Mauls to get the maximum heal. There are also some fights, like Baleroc, where the heal just doesn’t scale well with the fight mechanics.

If you are unsure which way to go, start with FR glyphed. That way you don’t have to manage rage starvation while learning a fight. An opportunity for an unglyphed FR might appear later during the encounter, so be prepared with a couple Dust of Disappearance and get comfortable with experimentation.

The Glyph of Frenzied Regeneration is a well balanced major glyph. Its use or lack of use depends on your situation, your healer team, and the fight mechanics. Use it (or don’t) well.