So there was an update to the Mists of Pandaria talent calculator a few weeks ago. I actually wrote most of this post back when it was timely, but I’ve been so busy with work and being burned out on raiding that I haven’t gotten around to polishing it until now.

Feline Swiftness: OMG 15% run speed! I am a sucker for run speed increases. (And don’t be sad cats, you now get a 15% passive run speed in cat form, and picking this talent will bring you back up to the traditional 30% if you wanted.)

Displacer Beast: Now without the DoT removal, it’s not very useful for bears. I really like the idea of a talented vanish for druids, but I don’t think it will be a very common choice, unfortunately.

Wild Charge: Glad this talent is on this tier now. The charges have all been simplified, and they’re all pretty useful. The flight speed boost is gone, however. :(

Overall Tier: I love this tier for tanking. There are really only two choices for PvE bears, but they’re tough choices. Displacer Beast sounds awesome, but it feels a bit out of place among two consistently useful talents.

Nature’s Swiftness: I still don’t like the reliance on macros for this ability, plus having to use a survival tool for a battle rez, but the cooldown has been dramatically reduced from 3 minutes to 1, which makes me much happier about this talent. I’ll probably stop complaining about it now, because that 1 minute cooldown makes it a very strong utility.

Renewal: The same as before but with a shorter cooldown (2 min, down from 1). Honestly it’s a little boring to me, but a straightforward heal will be useful in many situations.

Cenarian Ward: I don’t see any differences at all. As long as this talent is castable on yourself, I like it more than Renewal, but that’s a personal preference. This will also be a nice talent for tank swap fights where you can help your fellow tank out with some heals (while staying in form).

Overall Tier: Three very difficult and situational choices for tanking. I think Nature’s Swiftness will be the default for 10 man bears, especially if you’re low on battle rezes, but the other choices will be valuable for personal survival.

Faerie Swarm: Same thing as last time but with a simplified tool tip. There aren’t a lot of PvE encounters that require you to kite a single mob, though if there are then this will be useful. There are many times where I would have loved something like this for tanking Riplimb.

Mass Entanglement: No longer requires caster form or a 2 second cast, which makes this talent suddenly awesome. It also no longer has a targeting circle, and instead roots everything near your current target, and has a 20 second duration, up from 8 seconds. I would love an AoE root in 5 mans where a pull that needed to be crowd controlled goes bad. Nothing like rooting five mobs with a CC that doesn’t immediately break after damage.

Typhoon: Awesome, as always. Very good for kiting AoE mobs or in encounters that benefit from knockbacks. It’s also bearfoon, so it’s the best.

Overall Tier: Depends on what you’re doing the most. I love Typhoon, but a clutch mass CC would be awesome too. If MoP has a lot of kiting opportunities, bears will be in a very good position. We might even be able to match warriors!

Soul of the Forest: Brand new talent that grants more rage generation to your Mangles. This will mean more Savage Defenses over the fight. How many more? I can’t say, but I think this talent has a lot of potential.

Incarnation: Instead of a consistent stream of extra rage over the encounter, you can have a burst of rage over 30 seconds, which means far more SDs for the duration. Now it also reduces the cooldown of Growl, so it’s great for extra aggro.

Force of Nature: Still no idea what this talent does. I hope it’s cool.

Overall Tier: Excluding Force of Nature because who knows what that does, bears will have a choice between more Savage Defenses consistently throughout a fight, or a cooldown that grants you a fast string of SDs. This will probably be a personal choice. Most likely, Soul of the Forest will be the best for new players or lazy people (hey, that’s me!) and Incarnation will be best for people who know how to use it.

Disorienting Roar: (No longer Demoralizing Roar) Awesome for kiting and tanking multiple adds. Now it’s usable in all forms, though we don’t really care about that as bears.

Ursol’s Vortex: This is still my favorite because it’s a great way to control casters and I think it will be very strong for 5 mans. They changed it so that instead of pulling everyone toward the caster, it pulls them to a place of your choosing. I’d rather pull everything to me because that’s easier to use in a chaotic situation, but it also means that you can pull them away from you should you need to avoid damage. There’s also the interesting duration of 15 seconds. Does that mean it constantly pulls mobs into it for 15 seconds? How will mobs/pvp enemies ever escape if they’re stuck in vortex 50% of the time. I’m not gonna lie, I look forward to seeing a pair of druids bouncing a group of mobs back and forth between Ursol’s Vortex locations and Typhoons.

Mighty Bash: As far as I can tell, the traditional Bash is gone. Now we have Mighty Bash which is the same thing but usable in all forms. I did like Bash for tanking trash, and it’s very useful, though I’m not sure it’s exciting enough for bears compared to the rest of this tier.

Overall Tier: Disorienting Roar for damage mitigation, Ursol’s Vortex for control. I just love the sound of Vortex, but I think both of them will be awesome for bears. Mighty Bash will be useful too, but I feel like a single target stun on a long-ish just doesn’t compare with AoE control on short cooldowns.

Tier 6: We don’t want ferals to shapeshift unless they can’t do it effectively but still have to waste a talent point on it. 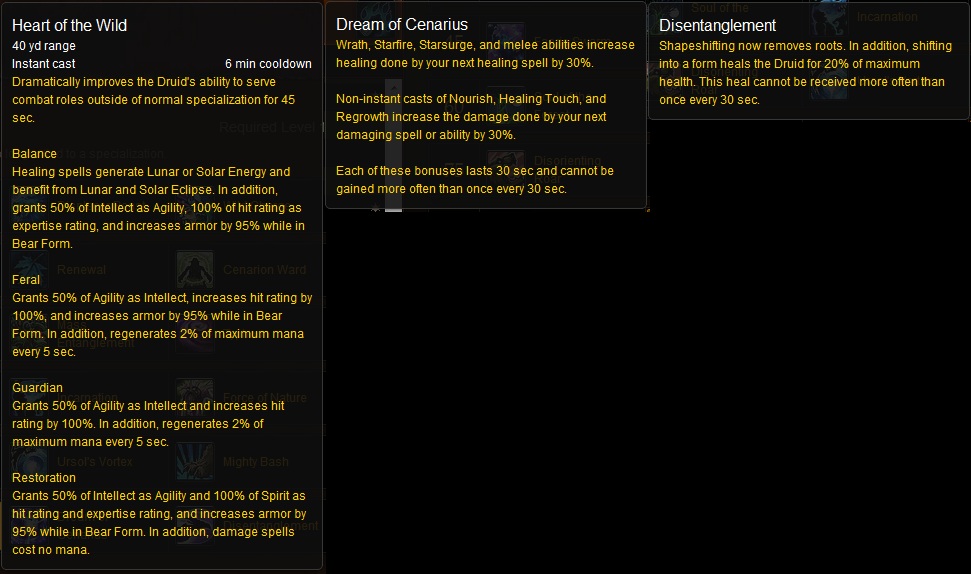 Heart of the Wild: No change. They just won’t give up on this talent. It sounds cool, but I can’t imagine any encounters that have long periods of time that don’t require us to tank and that could benefit from our ranged dps or heals. The cooldown and duration are too long for this to be practical. I know this talent gets a lot of hate, but I think if the cooldown and duration were shortened then I might want to pick Heart of the Wild — as long as we actually did passable dps as a caster.

Dream of Cenarius: Similar to the old Master Shapeshifter, except this one sounds much more exciting. I doubt the dps benefit will be a game changer, but it encourages you to heal every once in a while. Of course as Guardians we will only have access to Healing Touch and Wrath, so that makes it a little more boring. Maybe people will start a pull with Healing Touch and then shifting to bear for a super-powered thrash? I’d really like to start a pull with Rejuvenation because that would actually be useful for tanking, but we can’t have level 90 talents be that useful. If the healing bonus counts towards things like Cenarian Ward and a Nature’s Swiftness’d Healing Touch then it could be very, very good (though obviously those heals wouldn’t count toward increasing melee damage).

Disentanglement: No change. Still a 20% heal on a 30 second cooldown. It will require a way to track the power shifting cooldown and a close eye on your rage (so that you’re not losing it all when you shift), but it’s still the most obviously talent here.

Overall Tier: It’s better than before. If Dream of Cenarius really does increase the healing of spells we can use in bear form, then it’s a welcome competitor to Disentanglement. If that’s not the case, well, can’t we just have my super awesome idea instead of Heart of the Wild?