There seems to be a lot of confusion over the value of expertise, so I’m going to lay out the facts and then finish up my thoughts on that ever-prevalent question:
“should I hard cap expertise?”

First off, expertise has experienced some subtle but significant changes in MoP. To eliminate a source of expertise confusion, it’s necessary to have a little history lesson.

In Cataclysm, expertise reduced both your chance to be parried and your chance to be dodged at the same time, making it essentially double dip in value until you reached the “soft cap” — the term we use to describe how much expertise was needed to completely remove your chance to be dodged. After the soft cap, we didn’t have to worry about attacks getting dodged, though they were still parried unless we somehow managed to reach the hard cap (which was difficult to do, and never worth it). This made the stat somewhat valuable until you reached the soft cap, and much less valuable after reaching the soft cap.

In Mists of Pandaria, expertise was reworked, and this double dipping up to soft cap doesn’t happen. Expertise reduces your chance to be dodged first, and then your chance to be parried. It does not “double dip” before the soft cap, and it does not suddenly drop in value once you go beyond the soft cap. Really, we should avoid calling it the “soft cap” from now on, as that is misleading. There is only a dodge cap, which happens at 7.5% expertise, or 2550 rating, and a parry cap, which happens at 15% expertise, or 5100 expertise rating. 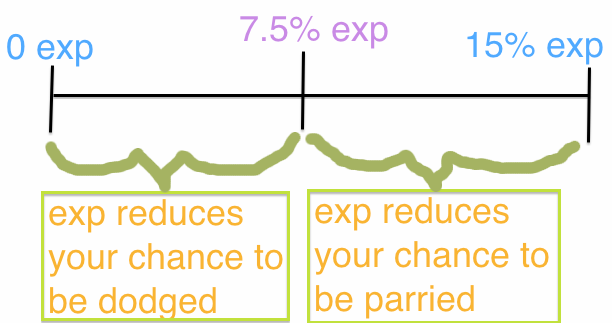 I believe most of the confusion over expertise capping springs from the outdated Cataclysm model, where we were trained to reach the soft cap (if at all) and that the hard cap was not useful or really feasible. To make matters worse, we still continue to use the same terminology to describe the MoP model, even though the meaning of the terms has changed.

So what does this mean for brewmasters? Well, let’s take a look at how we are affected by parries and dodges, assuming our targets are facing us. Parried and dodged attacks, while having different names and sound effects, influence our skills exactly the same way. Any hit that can be dodged can also be parried. This is different from the hit stat, where some skills (namely, magical spells) can be missed but not parried / dodged. It is also different from block, where a blocked attack only has its damage reduced, it does not prevent resource gain or secondary effects. While tanking, parried and dodged attacks can be treated as the same.

When you’re not tanking, the rules change a little. The primary difference between dodge and parry is this: when your target is not facing you, your attacks cannot be parried, though they can be dodged. This situation will almost never happen while tanking an npc creature, though there are often times in boss fights where we are not actively tanking.

The Effects of Expertise

Here are the brewmaster skills that are affected by expertise:

And for the record, here are the skills whose defensive effects are not affected by expertise:

Expertise is useful for brewmasters’ resource generation, primarily Keg Smash. It does not directly contribute to our active mitigation, but it strongly influences our active mitigation indirectly. If a Keg Smash is missed/dodged/parried, that can be critical to your survival because you missed out on 2 Chi you were expecting to have, which could have gone toward a Blackout Kick or Guard if it had landed, and you have to wait for energy to regain and the cooldown to refresh before getting another chance at those 2 Chi.

How Important Should Expertise Be to You?

Let’s say you use Keg Smash 40 times during a boss fight. With no expertise, on average we’d expect 7.5% of those to get dodged and 7.5% to get parried, for a grand total of 6 avoided Keg Smashes, and 12 Chi lost (and even more if you’re not hit capped). At the dodge cap, 3 Keg Smashes would be parried, resulting in 6 Chi lost. Overall, you’re reducing your chi generation by however much hit or expertise you’re lacking.

Since expertise is related to chi generation, it can be tempting to compare it to haste. After all, both stats increase that chi generation, expertise by getting more Keg Smashes/ Jabs to land, and haste by increasing your energy generation which leads to more Jabs, but they are not the same. The important thing here is that when you push your Keg Smash button, you expect that skill to land, and you can often be in a bad place when it doesn’t. With haste, the bonus you receive is only noticeable over time.

When you Keg Smash, you often depend on those two chi to keep shuffle up or to use a Guard, and the more acquainted you get with boss fights and your active mitigation, the more you will depend on that hit landing. When a key skill like Keg Smash does not land, you put yourself at risk of not having any active mitigation available. And even if you manage to train yourself to not always expect Keg Smash to land, then you further complicate the already complicated task of managing your damage intake.

Hard capping expertise and thereby removing all chance of parries or dodges significantly increases your control over your Chi generation and ability to keep damage intake smooth and manageable. Not capping introduces unpredictability and risks a parry/dodge at a critical time, leaving you with few tools to aid your recovery. Timely active mitigation usage (which often correlates with skill) has a greater effect over your survival in dangerous or unpredictable situations than passive stats, and expertise / hit are the only stats that further remove unpredictable failures of your active mitigation. Parry capping also makes playing a brewmaster easier because you no longer have to react to unlucky streaks of slow Chi generation.

For monks who primarily tank, I recommend you reach hit cap (7.5% hit, 2550 rating) and both parry and dodge expertise caps (15% exp, 5100 rating), commonly known as the “hard cap”. Expertise gives you reliability, which is needed for active mitigation. Of course, you can still choose to ignore caps and reforge your stats to haste or crit, but you’re putting yourself at risk of missing a Keg Smash or Jab when you need it most, and as a tank your job of surviving as long as possible is best augmented by reducing the potential for random failures. Even for fights where you spend a significant amount of time not tanking and attacking from behind, your job is still to survive while tanking, and it’s better to waste some stats while not tanking than to fail at your primary goal.

If you only tank sometimes, or you play windwalker and brewmaster roughly equally, then I suggest reaching the “soft cap”, or dodge cap (7.5% exp, 2550 rating), so that those extra secondary stat points are not wasted while playing a dps role. You can also choose to use an expertise elixir to get closer to the parry cap while playing a tank role.

Finally, if you have experimented with different levels of expertise and find that playing below the cap suits you, then that is a good way to go. My recommendations are here to give beginners a place to start and to teach people how to make tanking decisions based on personal experience instead of simply theorycrafted numbers.