Level 60 talents originally focused on crowd control, with Leg Sweep, the one with the shortest cooldown, longest effect, and AoE capabilities, being the clear winner. Ring of Peace didn’t exist until a later patch, and the original talent turned Paralyze from a melee ability to a ranged one. That talent has since been folded into the default Paralyze utility. Charging Ox Wave’s only change was a drastic reduction in cooldown, making it shorter than Leg Sweep.

In the modern times of late Mists, we now have three competitive, though highly situational, talents. One for frequent/ranged stuns, one for disarm/silence, and one for longer duration stuns. 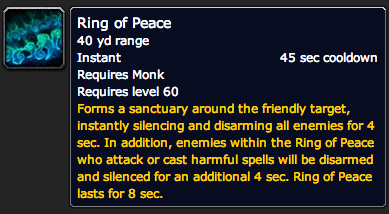 Ring of Peace (45 second cooldown, 8 second duration) will disarm and silence PvE enemies if they attack near the friendly target it is cast upon. Unfortunately many mobs are immune to the effects. Useful in places where the stun diminishing returns become an issue (challenge modes) and for an additional interrupt.

Charging Ox Wave (30 second cooldown, 3 second duration) is an awesome way to start a pull, especially given that monks tend to be squishy at the beginning. It’s also useful for ranged kiting, though the skill has to be aimed properly to be effective.

I honestly think this tier turned out pretty well at the end of Mists. The talents aren’t used often, but they feel important when you do use them. Hopefully future encounters continue to be designed with control in mind.

(With the changes to crowd control in general coming in Warlords, well that’s an entirely different situation. But this is a Mists retrospective so I won’t go there yet.)

I typically default to Charging Ox Wave because it’s useful for both frequent interrupts and kiting, though Ring of Peace has a place, too. Leg Sweep sees less use because it doesn’t have quite as strong a niche as the other two choices. However, in raids the sample size of encounters where any AoE control is useful is so small that it’s difficult to make a conclusive judgement.