The tier 100 talents are emerging with the unique theme of damage vs. defense tradeoffs. Chi Explosion is at one extreme, actually hurting your defense (by removing your ability to pool chi) but likely providing the largest damage increase. Soul Dance at the other extreme, doing nothing for damage but providing a situational but powerful damage management passive. And Serenity is somewhere in the middle, providing a weak defensive and offensive boost.

The goal was to see if there is a noticeable damage difference in using CE at low vs. high chi amounts. By itself, there should be, since the formula is basically X+nX, where n is the number of chi and X is a constant based on attack power. We should get more damage out of low chi usages because of that base damage. However, Tiger Palm throws a monkey wrench into that hypothesis.

Tiger Palm is free, fills all our empty GCDs, and contributes quite a bit of damage. A cast of CE comes at the cost of a Tiger Palm. So each cast of CE has to be significantly more damage than a cast of Tiger Palm to justify the chi and opportunity cost.

With the aid of some napkin math and backed up with some test dummy experiments, it seems like the opposite of my hypothesis is true: you get more damage out of less frequent, high chi usages of Chi Explosion. However, it’s a nearly insignificant amount more. Here’s what the chart looks like: 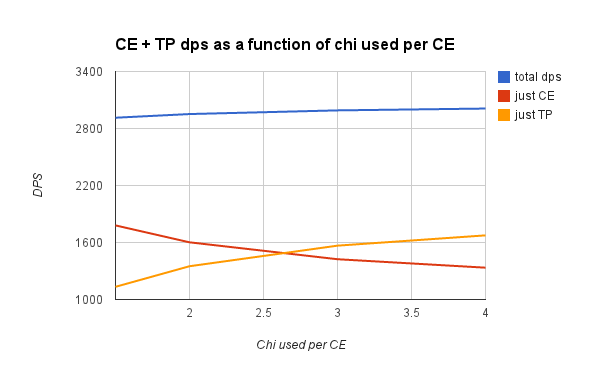 (And here is my spreadsheet)

I’m not very confident in these numbers because I saw a pretty large variance and the numbers are in flux anyway. But I want to use them to discuss how I think things should be balanced. These numbers are from the premade level 100 Brewmaster with no trinkets equipped.

Serenity was the most disappointing. I can’t say I’m surprised, but it increased dps from the base by roughly 3.6%, which is rarely worth it. Its only dps benefit comes from more frequent blackout kicks, which typically make up about 25% of our total damage. It’s only defensive benefits are enabling you to start a pull with a longer duration of Shuffle and free Purifying Brews. Longer Shuffle duration is something you only worry about at the pull or during heavy movement fights, and so is of little use (and easily covered by other talent choices). More frequent Purifies is okay, though since you’ll only get hit by the average boss every 2.5 seconds (if you’re unlucky and don’t avoid) and the buff only lasts 10 seconds, you’ll at most only be able to take advantage of it four times.

How Should They Be Balanced?

In a less-than-ideal world (ideal would mean no chi explosion because I hate it), I imagine our talent choices like this:

What needs to happen to accomplish this?