I’ve had a volatile past with Chi Explosion. I’ve never loved it, and at times I’ve hated it so passionately that I considered rerolling. The most I’ve given it was an ambivalent acceptance, acknowledging that it was an interesting decision when compared against Serenity and, if there were more applicable fights, Soul Dance. But nowadays I’ve found myself using it, and for reasons I’d never predicted. Beyond the personal damage boost, Chi Explosion makes me think more about tanking.

Where Serenity simplifies shuffle and purifying brew management by pushing those mitigation tools out of the realm of defensive decision making, Chi Explosion does the opposite. Serenity makes chi management a simple issue because it gives you such a long Shuffle duration that you don’t need to worry about it, and you can spend all your remaining chi on Purify, Guard, and Blackout Kick for damage. In contrast, often at the cost of survival, Chi Explosion makes Brewmaster short term survival something necessary think about. By making Shuffle more difficult to maintain and increasing the cost of Purifying Brew*, it makes Shuffle vs. Purify a frequent and important decision. That is why I’ve been using it more and more often. Chi Explosion the dps talent makes me think about tanking more than its defensive siblings ever did.

There are still things I don’t like about Chi Explosion, like having a reactive skill such as Purify attached to the expensive 3-chi version or removing my ability to pool chi. However, that dislike is more emotional than objective disagreement with the design, since what I don’t like is actually what makes it interesting. If Purify was attached to a cheaper chi cost, then it wouldn’t be so hard to balance more frequent purifies with a longer shuffle duration. The inability to pool chi means that I have to plan my chi gains in anticipation of what I might need later. There actually is a form of chi pooling with Chi Explosion, though it’s short term and limited to a few seconds of sitting on 2 chi while you decide what kind of explosion you want or if you need to Guard.

One and four chi Explosions are still not very compelling, and typically happen when a mistake was made. A one-chi explosion only applies damage, and I’ve only ever used it as a ranged pulling tool, which is still not ideal but, like I said, a sign I made a mistake. Four chi is decent AoE, and not nearly as wasteful a one-chi explosion, but still not ideal when you could be gaining more shuffle or more frequent purifies with 2 and 3 chi explosions.

I also think the animation is boring when compared with the unique spin of Blackout Kick. But as a monk I’ve been spoiled. Blackout Kick feels satisfying, with the kicking and the purple streak. Chi Explosion is a simple green burst that uses your race’s default insta-cast animation. 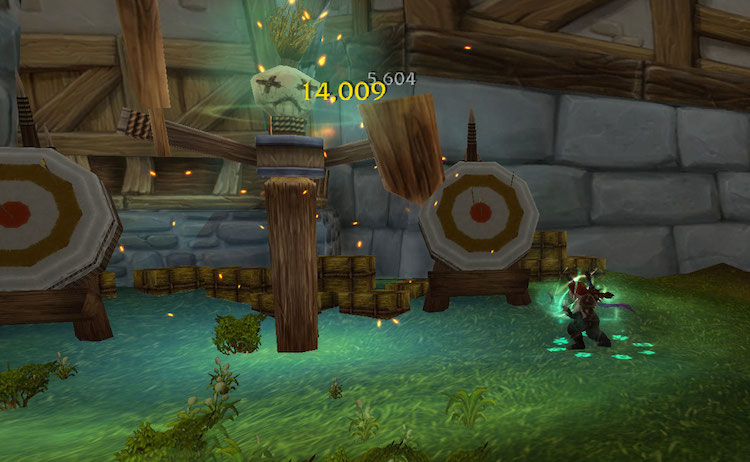 In part, the “offensive paradox” of Chi Explosion can be blamed on Shuffle and its eternally stacking duration. In the old days (or with Soul Dance), spending chi on Shuffle was an interesting decision for the first minute of the fight. Once you built up a good duration, it became a boring decision. Chi Explosion solves this problem by making that Shuffle duration difficult to maintain (in most circumstances). Once Shuffle becomes difficult to maintain, every chi you spend on Purifying Brew and Guard becomes that much more valuable.

I also love how Chi Explosion shines a whole new light on our chi generation talents. The rate at which you generate chi becomes very important with Chi Explosion. A burst of two chi, like from Power Strikes or Chi Brew, is more valuable for quickly contributing to an ideal chi explosion than two chi generating slowly. I’m particularly attached to combining it with Chi Brew, since that alleviates the chi pooling problems. But there are also opportunities with Power Strikes, which makes higher shuffle duration a breeze due to increased 2 chi opportunities. Even Ascension, which is an unpopular choice, adds a unique spin by making those 4 chi explosions easier to save for, should you need them, or by making that next single chi come down the pipe more quickly.

I think it’s important to note that, as an overpowered tank of average progression, I’m in a unique position to make decisions based on what I think is more interesting, instead of what is truly necessary. I can survive easily enough that I can afford to make these trade offs more often. If I was undergeared or if brewmasters couldn’t easily shrug everything thrown at them, I’d likely be encouraged to make more defensive decisions. But I’m not, and Chi Explosion gives me an opportunity to pretend that I have to work hard to tank.

I’ll be curious to see how much use Chi Explosion gets in 6.2, where the shuffle vs. purify decision is less important and brewmasters will be more destructible. This whole post is about the unexpected gains of Chi Explosion, but it’s more obvious benefit of improved damage still remains the most important reason to choose this talent. In the most recent episode of TankCast, we discussed the balance of those damage vs. survival trade offs.

In that podcast, I talk up Chi Explosion quite a bit because I think it’s in a good place as far as a defensive-offensive trade off. It’s a noticeable but not required damage boost and actively forces you to make in-the-moment decisions based on whether you want more survival or dps (as opposed to passively increasing your damage like a stance change would). If you want to hear more opinions on all that stuff, listen to the podcast.