Ferals, with two roles smushed into a single specialization, are the strongest hybrid in the game. To make the most of your chosen feral spec, you should learn how to play both cat form and bear form to the best of your ability.

I spend about half my progression raids as cat, half as bear. While I think part of this is due to my guild’s Divine Guardian guilt (“we really like bears, but Divine Guardian is just so overpowered that we’re forced to use two paladin tanks; here, have a dps cookie”), it’s unmistakeable that bears bring the best off tank dps around. Bear and cat specs are nearly identical, and their gear is interchangeable. Holding your own as a bear-cat hybrid will take some extra gold and preparation, but the end result is that you become invaluable to your guild as both a tank and damage dealer. 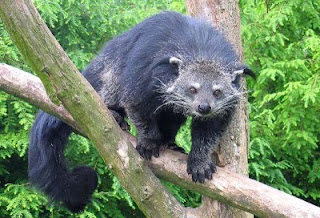 Apparently a bearcat is actually a thing.

There are two types of feral hybrids. The first is the tank that uses both cat and bear forms in the same fight; I’ll refer to this one as the “off tank” feral, even though this type of feral is often the main tank. The second is the druid that plays as a cat for one fight and a bear for the next, depending on the encounter; I’ll refer to this as the “dual role” feral. The dual role feral can be both a player who dual specs double feral and a player who uses a single spec for both bear and cat.

Here are the steps you need to take to maximize your overall utility in a raid group and to your guild. 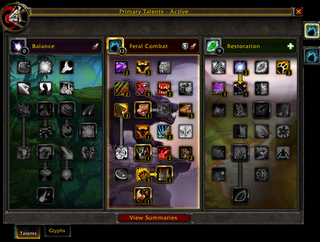 The best way to be a dual role feral is to make the most of your dual specialization. I use both my specs to meet the needs for my guild, and swap depending on my role in the fight. My primary spec is bear-focused, keeping off tank dps in mind while prioritizing defenses (a.k.a. “off tank” feral). My secondary spec is cat-focused, usually whatever the typical pure dps spec is at the time.

If you don’t want to or aren’t able to use up both your specs for PvE feral, stick with the bear spec. It has the most utility and necessary talents for both dps and tanking. Whenever I decide not to use my second spec on kitty dps, using my bear spec for damage still puts me at only 100 to 200 dps behind my guild’s pure kitty raiders. That’s close enough for me. You can also tailor your own spec to suit your raid’s needs, following the outline below.

The talents you should take no matter what are: Feral Swiftness, Primal Fury, King of the Jungle, Feral Charge, Leader of the Pack, Endless Carnage, Rend and Tear, Berserk, Heart of the Wild*, Natural Shapeshifter*, Master Shapeshifter*

The necessary dps talents are:  See “talents you should have no matter what your role is”. There are some extra talents that increase your damage output, but only by a small amount. If you’re trying to go for a hybrid cat/bear build, those dps talents are far less important than the necessary bear talents (and in my opinion, less important than even the optional bear talents. 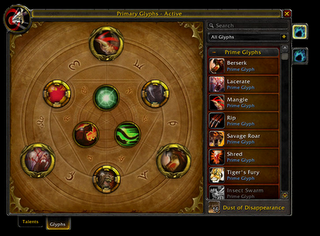 The purely tanking bear glyphs are:

The purely dpsing cat glyphs are:

For an off tank feral, I recommend:

Glyph of Mangle is very good for bear threat and damage; you should always have that glyph if you are tanking. Glyph of Rip is a strong glyph for cat damage, and depending on how much time you spend it cat form, it can increase your damage done by around 3% (which sounds low, but it’s actually pretty strong for a glyph). Glyph of Lacerate provides a small amount of mitigation and threat.

If you want to increase your off tank damage, Glyph of Berserk might actually be a better option than Glyph of Shred, as long as you use Berserk in cat form. There is a bit more testing I could do to find the strongest off-tank glyphs; that will have to wait until a future blog post.

For a dual role (single spec) feral, I recommend:

As for major glyphs, Glyph of Frenzied Regeneration is near-necessary for tanking raid content and Glyph of Maul is pretty good for AoE tanking. Cat major glyphs are lacking compared to bear’s strong major glyphs, so a hybrid feral should prioritize bear glyphs in that slot.

So much power in one little dog-shaped rune.

Bear and cat gear is almost exactly the same: we both gem and enchant agility whenever we can. If you have to share a gear set between bear and cat, try to get a different headpiece for both. The headpiece, with its meta and enchant, is the single most varying piece of gear between feral specs.

Below are the gems and enchants I recommend for hybrid ferals. 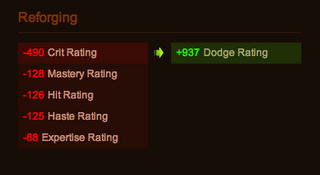 The complex mysteries of bear reforging.

The primary difference between cat and bear gear is how you reforge it. Bears always reforge their least desired stat to dodge; cats reforge to either mastery, haste, or crit. If you often play a dual role feral and you have some gold to burn, you should consider reforging between difficult fights that require you to switch roles.

Reforging is often considered permanent, like enchants and gems, but that’s not the case. To reforge all of your gear it will cost less than 120g, or the same amount as two respecs. If you don’t reforge your weapon, that price drops by nearly 40g. It’s expensive to constantly reforge, but if your guild is working on progression content, that extra bit of damage or mitigation will help more than you imagine.

To easily swap roles, I use an addon called ReforgeSaver. You can save profiles of gear and reforge to those different profiles with just a click. It saves a huge amount of time and effort for people that regularly reforge.

If you don’t want to reforge your entire gearset between bosses, but you still fill different roles, then you can compromise on your reforges. Mastery is a very good stat for both bears and cats (though it’s better for cats than it is for bears), so you can make your gear decent for both roles by reforging to mastery. Crit is also pretty good for both feral specs, so that should be your second reforging option. Haste is good for cats, but terrible for bears; avoid reforging for that stat.

I’ve spent up to 900 gold some weeks on reforging alone; it will quickly add up. Luckily, my guild subsidizes my costs. You should consider asking your guild to cover your reforging costs if they require you to switch specs on a regular basis. That guild bank money has to be used for something. 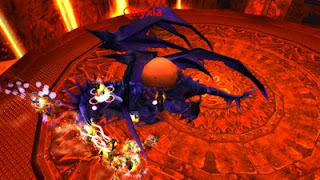 There’s more to perfect the art of feral hybridism out there, like managing your UI and researching both specs. It can take a bit of practice to master two roles, but the personal utility you gain is priceless. It is fun and challenging to squeeze in opportunities to go cat in a fight you’re tanking, or to out damage your raid’s full time dpsers. As a feral druid hybrid, you can do it all. :)

For those of you who are just starting out and learning the ropes, I highly recommend Leafkiller’s Ovale script. I used this addon to teach me the cat rotation, and it can also teach you the bear rotation (though I’m not particularly fond of the bear script because it prioritizes threat over mitigation). What Ovale does is it recommends the next skill you should use, depending on your current buffs/debuffs.

(If you, like me, don’t want Ovale to recommend a bear rotation at all, delete all the code that lies within “if Stance(1) {code stuff}” blocks.)