My guild is semi-hardcore. We try really hard to stay in the US top 100 (and usually fall just short), we raid every weeknight, and we often have to develop strategies for bosses that haven’t been the highlight of a TankSpot of Learn2Raid video yet.

A semi-hardcore guild like mine doesn’t jump into a fight blind. No, we’ve had a hundred or so guilds do it before us; ours is not the place to reinvent the wheel. Instead, we scour the parses of guilds that have successfully completed a fight. We google the far corners of the internet searching for incoherent hints and pieces of strategy, put them back together, and assemble a plan.

While this type of detective work is fun on its own, it’s time-consuming and requires you to spend precious game time outside of the game. With the Dungeon Journal, Blizzard is giving us the option of doing that research in game.

Previously, Blizzard couldn’t assume that WoW players would do research outside the game. Sure, they knew that a lot of players did, but they could never expect that players would go into an encounter with a basic level of knowledge. Assuming your users are taking advantage of outside resources just to use your product on a basic level is pretty weak design in any field, so Blizzard’s encounter designers had to design encounters around players that didn’t have access to outside resources. 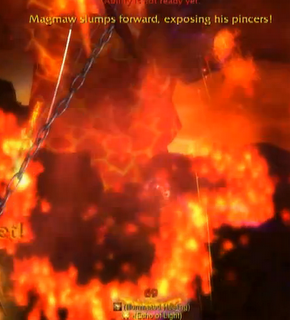 For example, take Magmaw. When designing that boss fight, the encounter team had to ask “Will the average player be able to figure out how to chain Magmaw’s head down on top of the spike?” It’s an unconventional way to complete an encounter, there aren’t any fights out there that the player can draw experience from. So Blizzard had to make it as obvious as possible without simply giving away the solution. With their limited resources, that meant flashing a yellow notice that reads “Magmaw slumps forward, exposing his pincers!” To further ease the learning curve that this fight requires, Blizzard made it possible to defeat the boss even if the raid never figured out how to use the chains; it simply takes longer. 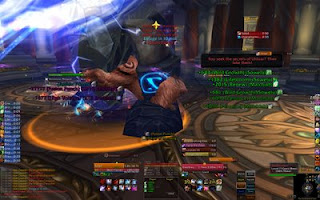 If you look back to Ulduar days, hard modes were activated by various methods that included killing some bosses in a different order or leaving some trash alive. This was the last time Blizzard would use this method of activating hardmodes, and that was because it was unintuitive to the average player. Sure, if your guild did lots of external research, you would know that if you killed Steelbreaker last, that was considered hard mode. If a guild looked at achievements, they might be able to discern which boss they should kill last if they wanted the easy mode, but why should you look at your achievement pane for a kill-order? It’s unintuitive, and normal mode is never explicitly listed. That is why Blizzard abandoned this way of activating hard modes. It forced the average guild to figure out strategies by looking outside the game or in strange locations inside the game, and you cannot assume they will do that.

DO NOT PUSH THIS BUTTON!

Now Blizzard is introducing the Dungeon Journal — a tool that’s sole purpose is to provide insight into encounters for the average player. They’re publicizing this thing, making sure everyone knows it’s there. They’re setting it up so that they can assume the average player will not miss it. Once they can make that assumption, they can start designing encounters around it. The encounter design team will no longer have to simplify a new mechanic in fear of it being too unintuitive. They won’t have to rely on limited tools like a boss emote to give the player hints. They have this new Dungeon Journal, something that provides those hints and more, and with that tool available they can make even more complex and engaging boss encounters than ever before. 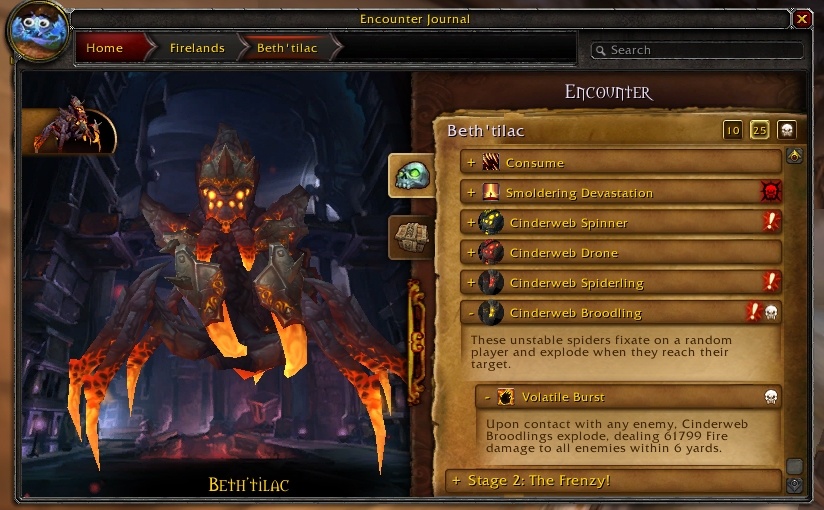 Look at the Dungeon Journal for Firelands. All of these bosses employ completely original mechanics. A boss that is steered by dealing damage to his feet? A druid who changes form depending on how the raid is grouped together? A spider’s web that protects you from devastating explosions? All these things would eventually be figured out by an experienced raid, but would probably confound a less experienced one if the Dungeon Journal was not there to point them in the right direction. The encounter design team would have had to simplify these mechanics so that the average, casual player could figure them out. But now all of us get to experience unique and exciting mechanics because Blizzard has increased the knowledge base it can expect WoW players to draw from.