I’m very excited about the new talent system. Not only will you be able to respec any time you want (as long as you’re out of combat), but most tiers actually do add an element of choice. I especially love the nature vibe emanating from most of these talents, which adds more potential flavor to bears. I believe they still need some polish, and likely many of these talents will change before Mists of Pandaria goes live, but let’s have a look at them before all of that happens. 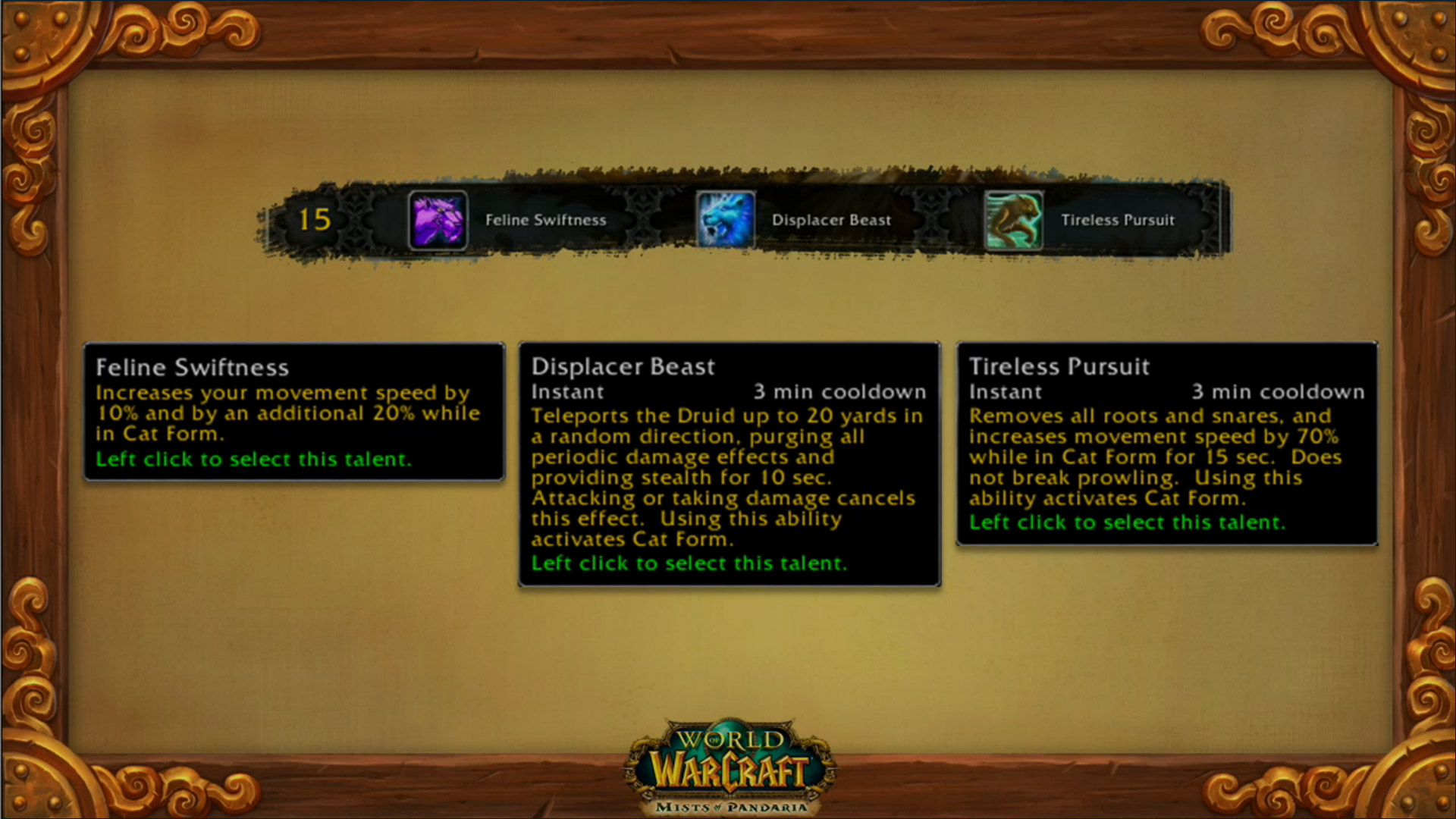 Feline Swiftness: 10% extra speed in bear form will be pretty nice, and more predictable than the other options. We won’t need a run speed boot enchant if we take this talent.

Displacer Beast: A teleport/vanish sounds awesome, but it forces you into cat and leaves you in a random location. Fun, could be usable in certain situations, but not all the time. The DoT removal might be very good for some fights, if it can remove boss DoTs.

Tireless Pursuit: This is basically the same as Dash with the current Feral Swiftness talent. Seeing as I don’t take advantage of that talent very often, I doubt I’ll spec into this one for PvE either.

Final Decision: Feline Swiftness will likely be the default choice. If Displacer Beast removes some serious encounter DoTs, you might situationally spec into that. To be honest, I feel that passive run speed is way too strong to pass over, no matter which spec you play. Wild Charge, a tier 4 talent, would fit in this spot much better. 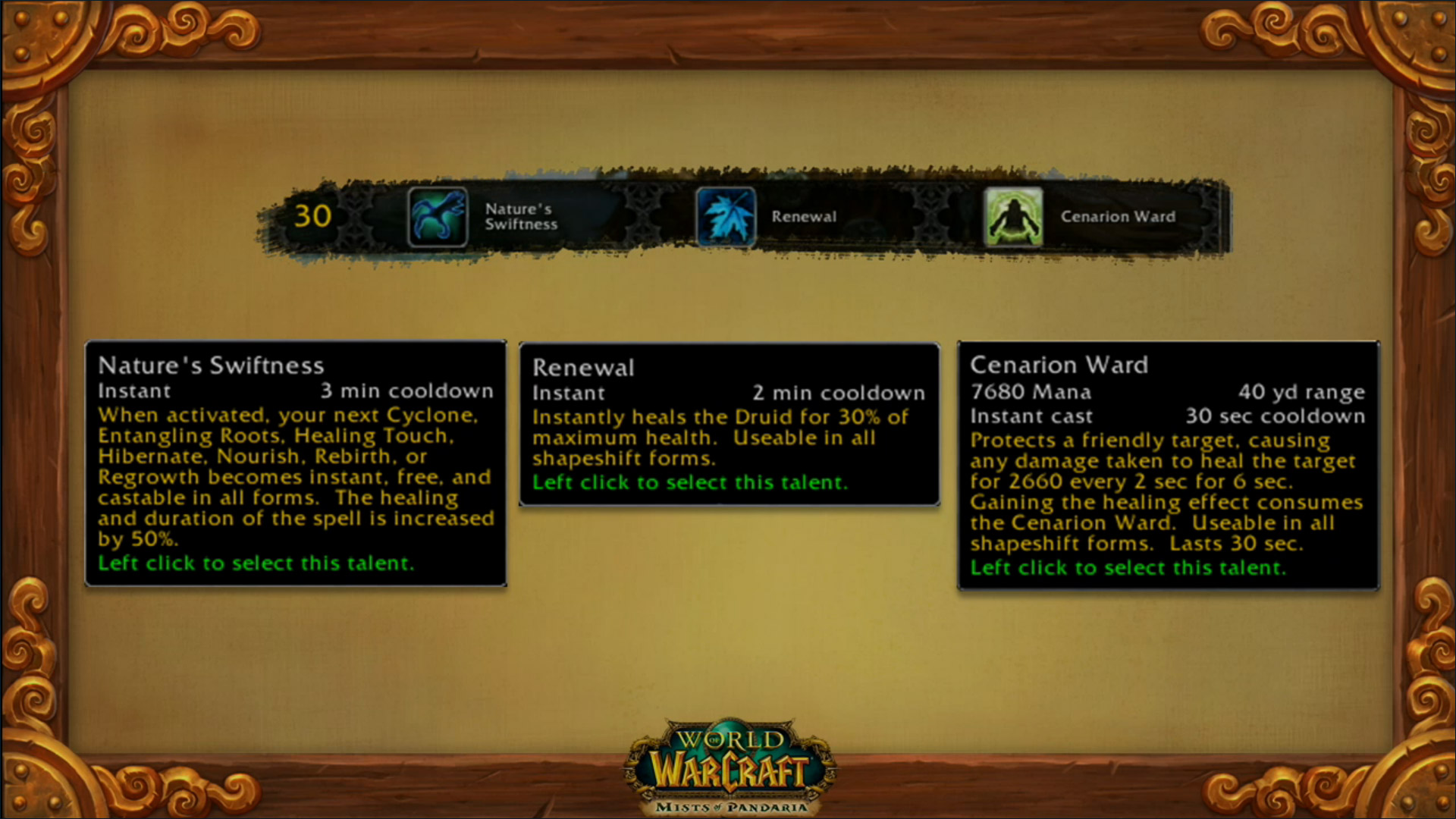 Renewal: Nice defensive cooldown with a 2 minute recharge, even though it’s a bit on the boring side.

Cenarian Ward: We don’t have real numbers and we don’t know how it will scale yet, so it’s difficult to judge this talent. With a 30 second cooldown, it could function as a mini-cd akin to shield block, and I would love more short cooldowns. It all depends on whether it’s a significant HoT and if it scales with bear stats.

Final Decision: Renewal will almost always be useful while tanking, though the other two could be strong contenders depending on the numbers. Also, if you are your group’s only battle rez you might pick Nature’s Swiftness first. 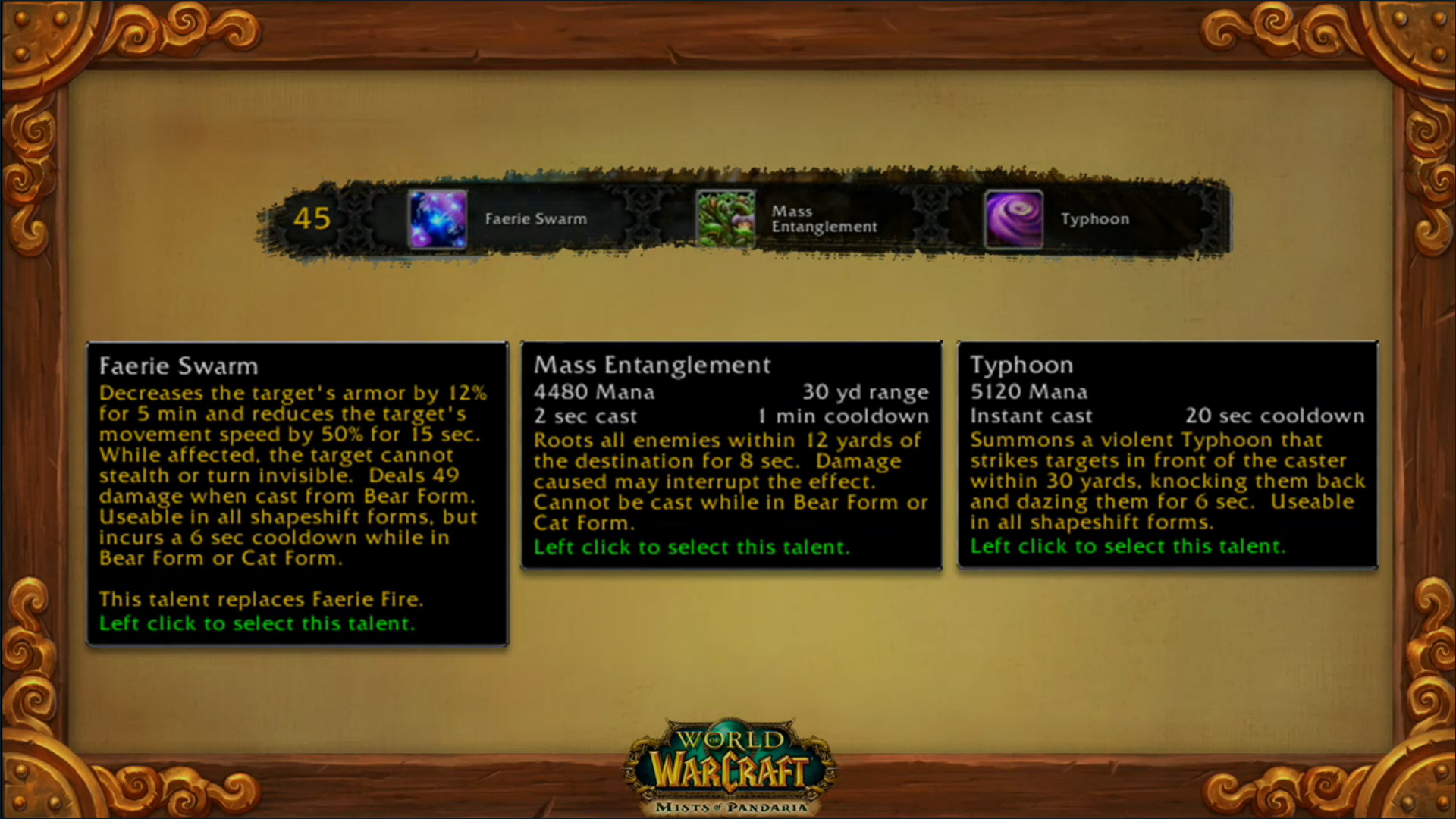 Faerie Swarm: Improved Faerie Fire. This might be good in PvE if it’s the only way to instantly get 3 stacks of Faerie Fire, though I don’t want to have to spend talents on something boring like that. A ranged snare might be useful in some cases.

Mass Entanglement: Not usable in cat or bear form, likely useless in PvE.

Typhoon: Love the idea of typhoon in bear form. It currently gives moonkins some unique and situational utility, and I could see it having similar kiting purposes while tanking.

Final Decision: I want to go with Typhoon, but I have a bad feeling that we will need to take Faerie Swarm just to stack Faerie Fire quickly.

Tier 4: Cooldowns That Vary by Spec 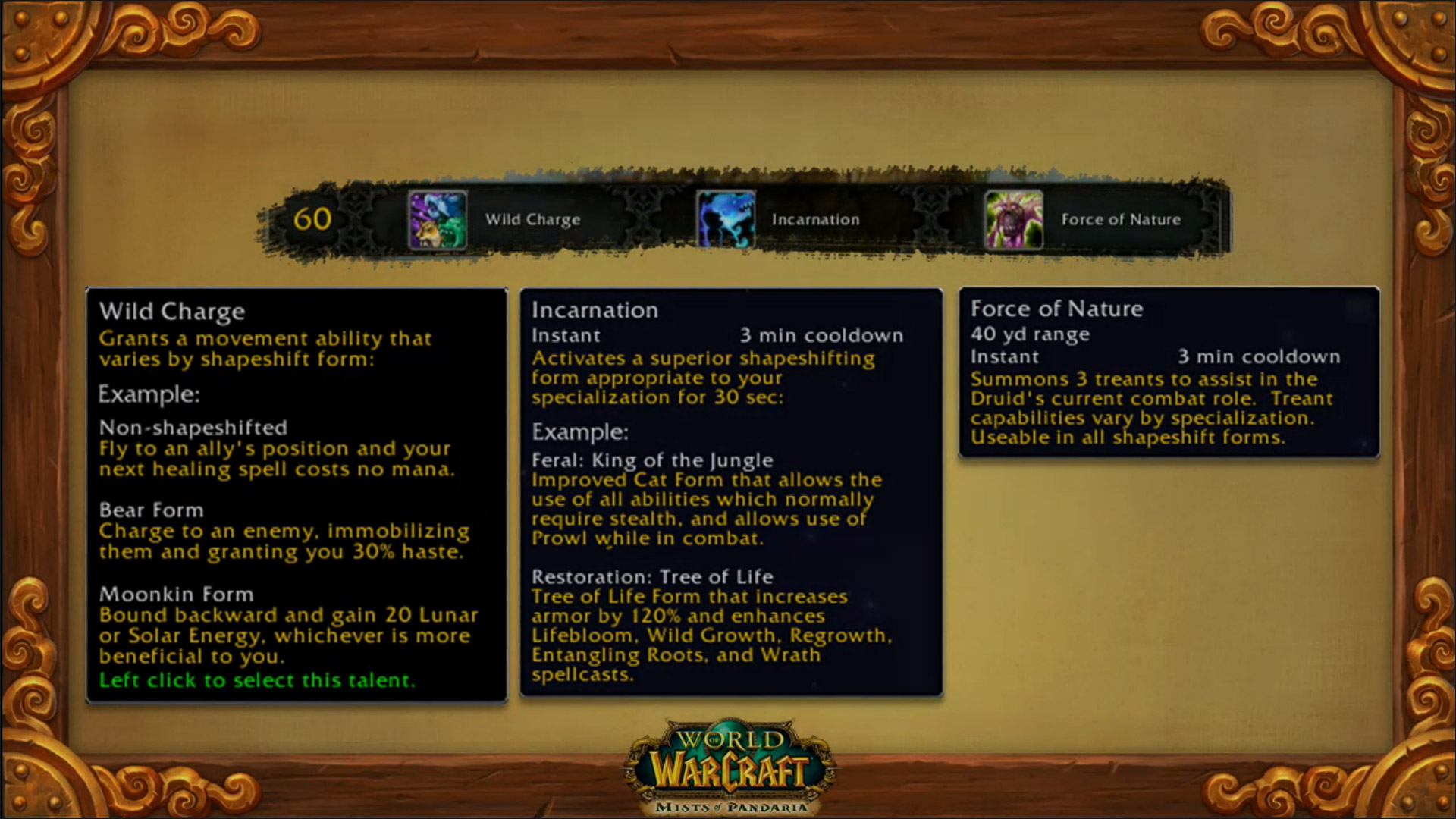 Wild Charge: If you’re in bear form, it’s the same as the current feral charge if you’re specced into Stampede (something very few bears do). I worry that they’ll take feral charge away and this will be our only gap closer. It could be useful in some circumstances, though I rarely use feral charge in raids as it is. If we have an opportunity to use this ability in caster form, that charge acts similar to Intervene (without the damage transfer), which is another mobility bonus.

Incarnation: They only list what will happen for resto and cat specs, so we’re left to speculate about what this talent will do for us guardians. Cats get a PvP and possibly a minor dps cooldown, resto druids get their Tree of Life cooldown, so I imagine we’ll get a defensive cooldown. It has a 30 second duration on just a 3 minute cooldown, so my guess is it will be a weaker defensive buff akin to Frenzied Regeneration.

Force of Nature: Sounds fun, but it lacks any specifics. They indicate that they will do different things for different specs, but don’t give any examples. If it follows what I think their new talent philosophy is, it could be a defensive cooldown that is similar in power to whatever Incanation is, but different in effect. Maybe the treants will have an ability to absorb damage for us?

Final Decision: We don’t know what exactly Incarnation and Force of Nature will do, but we probably will pick one or the other if they end up being defensive cooldowns. Wild Charge feels a little out of place on this tier, as it’s a short cooldown mobility talent compared to two (likely) defensive talents. 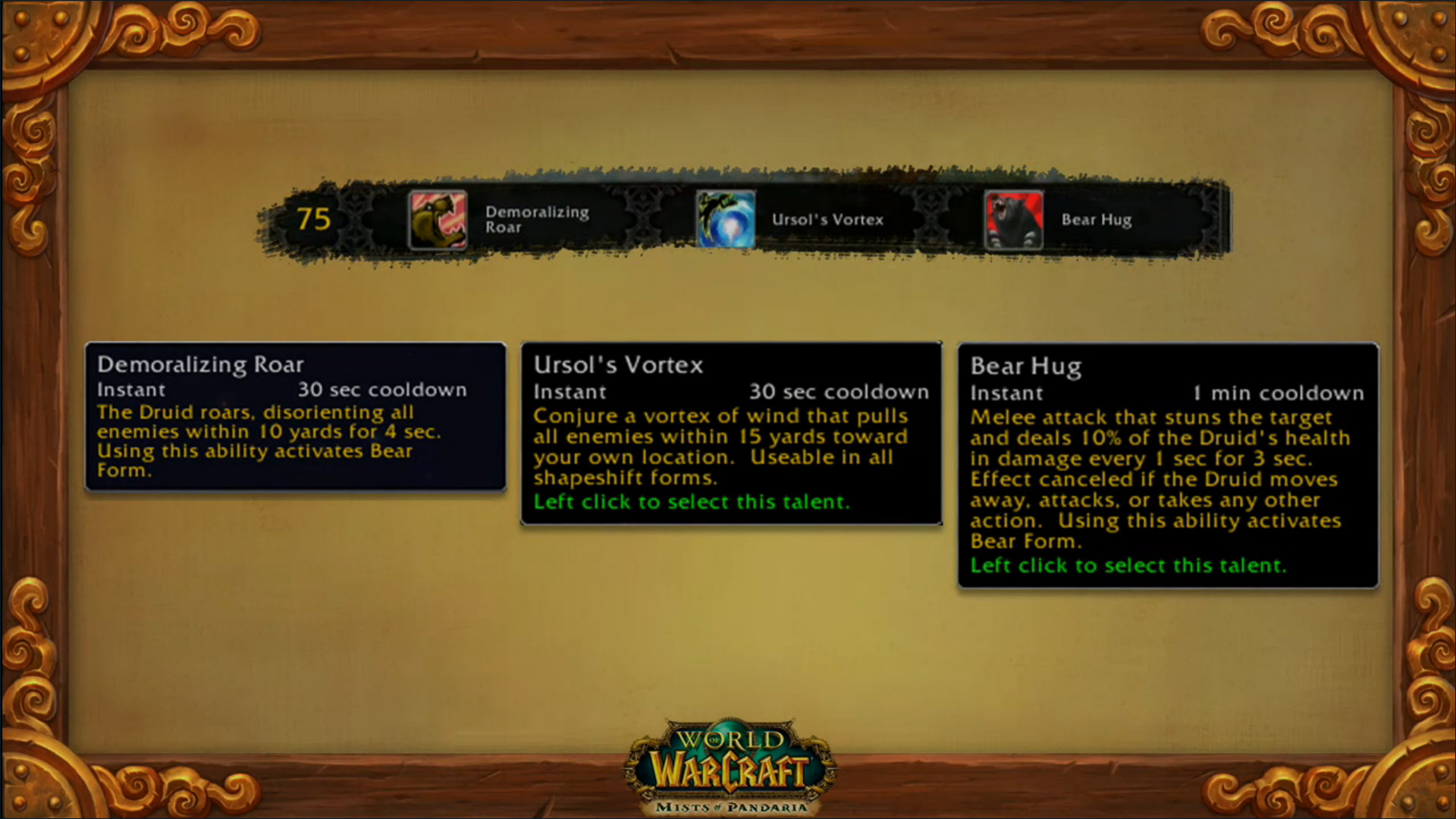 Demoralizing Roar: They’re getting rid of the current demoralizing roar (yay) and replacing it with this. It’s probably not useful in all cases, but it would be nice in fights where tanks need to control and defend themselves against adds. It’s basically a defensive cooldown for multi-mob tanking.

Ursol’s Vortex: This is my favorite. It’s an AoE Death Grip with a shorter range. It sounds like it could help quite a bit with those nasty caster mobs.

Bear Hug: Cute, but likely only useful in PvP. I can’t afford to stand in the same place for 4 seconds not attacking or doing anything.

Final Decision: I’ll likely pick Ursol’s Vortex because it sounds awesome, though Demoralizing Roar will have its place in some fights. 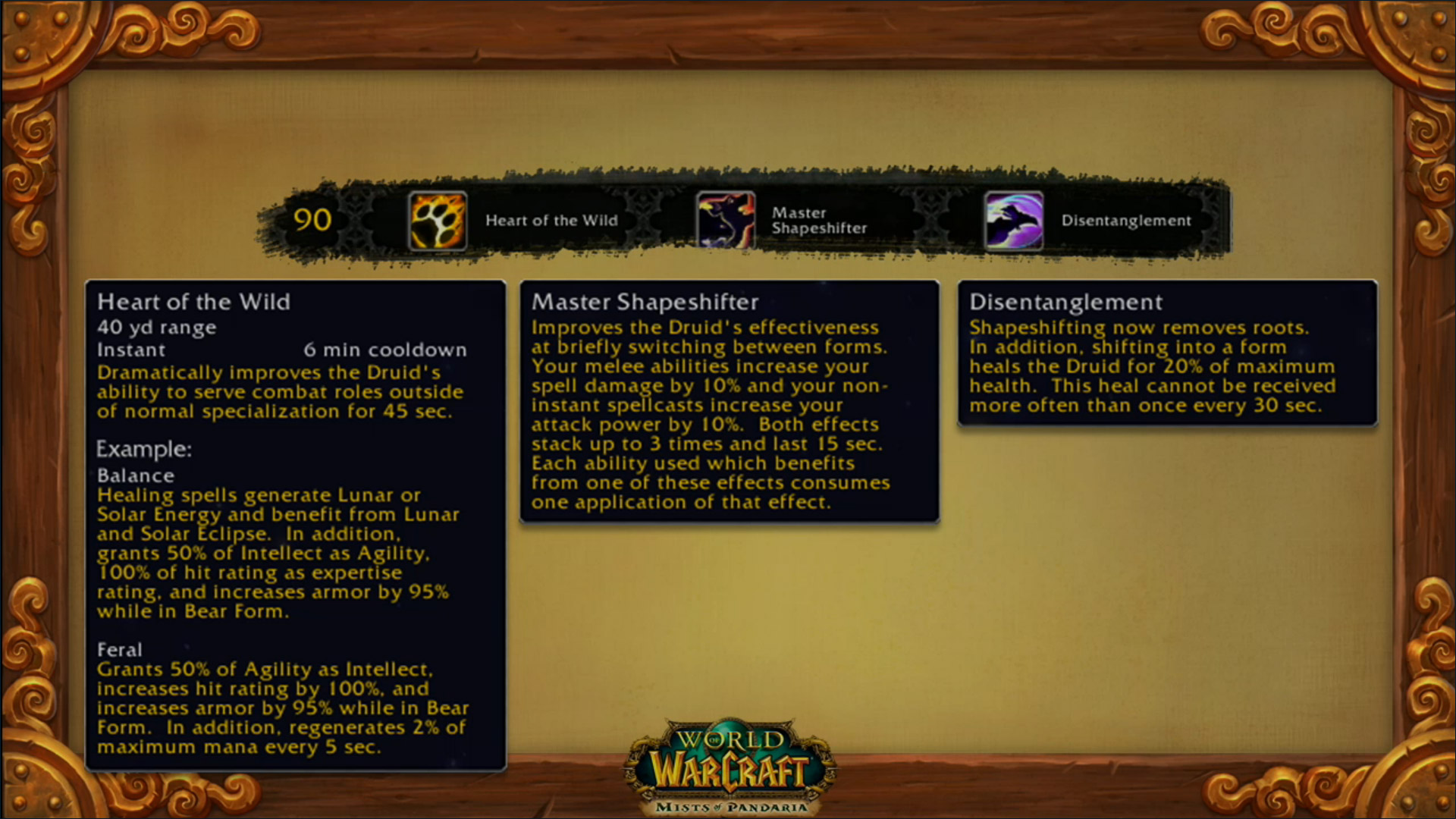 Heart of the Wild: Again, they don’t describe what guardian druids will get with this talent. I’m hoping that this will temporarily increase our dps in cat form for 45 seconds. This could give those of us who loved the bearcat playstyle a little hope. However, it’s a 6 minute cooldown, so it would only be useful for fights like Rhyolith where we need to tank for the majority of the fight, but dps for the last phase.

Master Shapeshifter: If you’re a melee druid, you get better at casting, and if you’re a caster druid, you get better at melee. I honestly don’t expect to see many druids choosing this talent, as it breaks us out of our comfort zone a little too harshly. It reminds me of the vanilla idea of druids that was not successful. If it increased spell power instead of simply spell damage, it’d at least be useful in PvP. But right now, blah.

Disentanglement: The heal is what interests me the most about this talent. If power shifting into bear (shifting out and back into bear form very quickly) grants the heal, then it’s a strong reactive heal on a 30 second cooldown. That seems way too good and Blizzard has never been fond of power shifting, so I doubt it will stay the same as it’s current incarnation. It’s also possible that the heal will only activate if you break out of a root, leaving it useless in PvE.

Final Decision: Largely depends on what Heart of the Wild ends up giving guardian druids. If Disentanglement works as a 20% heal on a 30 second cooldown, it will be very viable for tanks. If we need to help on dps, Heart of the Wild might win.