(With very little information to go on.) 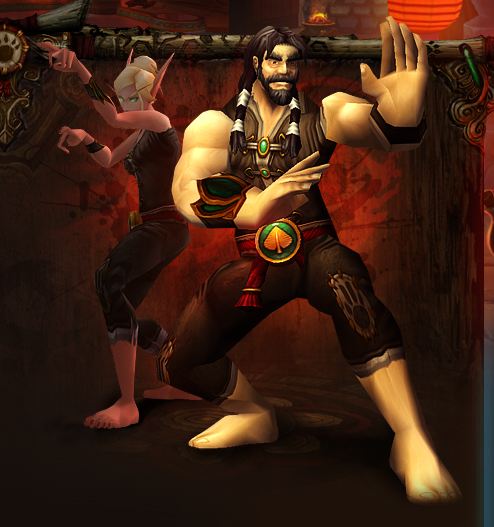 In an attempt to better understand Brewmaster monks, I’ve compared them to Guardian druids. I tried comparing similar abilities side-by-side, but many skills do not have a direct correlation between classes. A couple skills fit into more than one category, so they’re on this list more than once. I probably also missed some skills, so if you find any mistakes, please let me know.

Bears will still be the only offensive tank. That is, Guardians benefit from haste and crit, and will probably have more reasons to cap hit and expertise than other tanks. These stats will increase our rage generation, which leads to more frequent Savage Defenses and Frenzied Regenerations. Brewmaster monks, on the other hand, don’t appear to benefit from these offensive stats. I think they will love dodge, since each dodge gives them a huge amount of Chi (their primary resource). Parry will make their rotation a bit more dynamic and probably increase their damage.

This makes me wonder how Brewmasters will get the defensive stats they need from leather. Guardians benefit from the offensive stats because they contribute to rage generation, but it doesn’t look like Brewmasters benefit from offensive stats in the same way. Hit and expertise will still be useful, since a few of their defensive attacks still need to land, but I don’t see a motivation for them to wear gear with crit or haste. Their primary stat will be agility, which as of this moment doesn’t provide parry. We’re obviously missing some key stat balancing here. I wonder if Brewmasters will have a stat conversion like haste turns into dodge or something like that. Ugly, but it might be required to differentiate the play styles of bears and guardians while keeping them in the same gear.

Brewmasters have a skill that will grant them 50% dodge nearly 100% of the time. This leads me to believe that they will be the closest thing WoW has ever had to a true avoidance tank. (It’s also possible that there’s a typo in there somewhere, but I’m going off of what we can see now.) They use lots of absorption skills, but not nearly as many heals in their toolkit compared to druids. They have their own replacement for block called Stagger, which shaves off 50% of the damage dealt and deals the remaining 50% three seconds later (similar to Stay of Execution ). That’s pretty huge for smoothing out burst damage, though it will likely be physical only so I’m not too worried.

I don’t know where monk tanks will get their passive health and armor bonuses. They probably won’t have as much armor as bears, but they have to have a bonus to leather armor somewhere. They’re also missing a passive health bonus that all tanks get.

The data we have is obviously incomplete. I assume Blizzard left some of these out intentionally because they’re a given and not so interesting to have on a big press release, but there are a few key tanking skills that they do not have, such as:

As is to be expected, all the information I have on monks and MoP druids
comes from the Blizzard talent calculator and the information presented
by MMO-Champion/WowheadNews/WoW Insider from the recent press release. I
personally played low level monks a little at Blizzcon but a lot has
changed since then. Naturally, this is pre-beta information and it will
change dramatically over the next few months.

From what I can see, Stagger will be similar to block. (It’s actually what the proposed parry was from Cataclysm beta, I believe.) It’s interesting because it doesn’t necessarily reduce damage (not until the monk mastery comes into play), but it reduces burst. As far as I can tell, the player does not have control over it, except for certain cooldowns that force it to proc and stances that increase its chance to proc. It’s also not perfectly clear whether the later half of Stagger happens as a DoT over three seconds or if it simply delays half of the damage three seconds. Right now I’m leaning towards the latter since that is the less over powered option.

I included Leader of the pack for completeness. It’s a small and usually insignificant bonus, but it’s nevertheless a passive defense. I have to admit that druids look really boring in this area, with all of our avoidance pushed into dodge, but that’s the way it’s always been.

It looks like the primary short term defenses will be Guard and Shuffle. Guard is a bubble and Shuffle forces Stagger. I don’t know how long Shuffle can be channeled. Each tank appears to have one damage reduction short term defense (Guard, Savage Defense) and one healer-helper defense (Shuffle, Frenzied Regen).

Elusive Ale is a bit confusing because it looks like it’s going to be up almost 100% of the time, just like Pulverize was. I thought that they were moving away from abilities like that, but who knows. It’s also a ton of dodge.

I’m also not sure how to catagorize the Ox Statue. If the tank can click it, and the tank clicks on it most of the time, then it can count as a mini-guard for them. It shouldn’t be assumed that this is a reliable short term defense, because it’s likely the raid will need it as well.

Monks have a maximum of 4 Chi (5 with the talent).

At this point in time, Tiger Palm is probably the primary attack, since it improves your next Guard and it has a relatively cheap cost. Blackout Kick gets modified by a brewmaster passive that will let you use it after a parry (similar to Revenge) at no cost. Jab/Clobber/Pike will likely be the filler skill since it costs only energy and grants 1 Chi.

Breath of Fire is in a weird spot since it doesn’t provide any defensive benefit and consumes 2 Chi. It might be in the same position as Maul, and intended as a button for a tank to push for dps when it’s not currently tanking. It might also function as a pull ability, but I don’t know if a monk will start out with enough Chi at the beginning of a fight to use it first. Then again, brewmasters might be overflowing with Chi since they have a ridiculously high dodge rate and are rewarded 5 Chi per dodge. Maybe they can just use all their abilities whenever they want. :{

Drunken Haze is another weird skill that doesn’t directly inflict any damage, though it increases the damage of Breath of Fire and has a chance to randomly inflict a chunk of damage. This might be used as a dot, or just an extra button to press during those non-tanking phases.

The thing I find interesting in comparison to bears is that we both have a relatively cheap skill that improves defenses in some way, Tiger Palm and Thrash. Tiger Palm grants a self buff that improves Guard, while Thrash causes the Weakened Blows (old Demoralizing Roar) debuff. The problem with Thrash is that it applies a debuff that any other tank and some dps can also provide, which leaves guardians in a rough spot where they perform better when someone else applies the debuff, and perform worse when they have to do it themselves. Overall, I think Tiger Palm is a much better implementation, though we have yet to see how Brewmasters will apply Weakened Blows.

I’ll be honest, I have no idea how to classify Drunken Haze. It’s apparently supposed to be used in single target, but it affects multiple targets, and it’s primary use is utility.

The monk can’t be tanking during Meditation, though as a general cooldown it’s pretty damn powerful. I can’t say Tranquility is equally as powerful, though with a bear’s default spell power it will at least be worth using come MoP (especially for 10 mans).

Avert Harm is interesting because it has a short cooldown but small range, and also inflicts damage upon yourself, so it must be used wisely while tanking.

Innervate has gotten even worse for non-caster druids, but I posted it here just for completeness.

Bears have always been really strong in the raid buffs/debuff apartment. According the the recent Ghostcrawler blog, Brewmaster monks offer just the standard tanking debuffs and 5% stats, which seems a little unfair considering all the other tanks offer at least one extra effect. I can’t imagine that Brewmaster monks will be very popular for 10 mans should they bring just a handful of common buffs.

Specifically healing to the raid that can be considered a minor utility.

This is a strange bracket, and the healing skills can’t really be compared since all of them are talents. Druids have a ton because we basically have 2 tiers of healing talents.

Fortifying Ale seems like a pretty awkward cooldown for a tank, but I’ll list it nonetheless. I can see it being useful in conjuction with a cancel macro, to absorb one big hit and then remove the buff before you die from lack of heals. You’d have to be pretty fast, and the chance for failure is pretty high with that one.

I’m not sure if Grapple Weapon fits here, but with the 1 min cooldown it might be a monk’s version of Barkskin. Maybe if you use it on a boss you get 20% damage reduction or something. I might be totally wrong here.

I couldn’t find a 50% damage reduction skill, so either I missed it or it’s not yet implemented. I can’t imagine monks would be the only tank without a 50% reduction skill.

I have no idea what Rushing Jade Wind will look like in practice. Sounds like cyclone, except you can cyclone your friends too.

Ring of Peace sounds way too game-breaking to actually prevent a boss from attacking, but I bet it works on trash and adds.

I compare these two simply because the monk has an AoE taunt when druids lost theirs (I’m not complaining, though, druids won’t need it with all of the AoE control they have). I wonder how large these statues will be, since the player has to find it under a crowd of adds to use the AoE taunt. With the addition of a run speed increase for the target, Provoke is obviously supposed to function as a monk’s ranged pull as well.

So there we have it. Personally, I’m very excited for monks because they reportedly have awesome unique animations, which are a pretty big deal to me. The hard part is picking a race.