I got into the beta a few days ago and quickly transferred a monk premade. I still can’t find a way to get a premade to Stormwind to test on a dummy, but I was able to find the first five man dungeon, Temple of the Jade Serpent, where I spent about two hours learning the brewmaster spec and soloing the first boss. 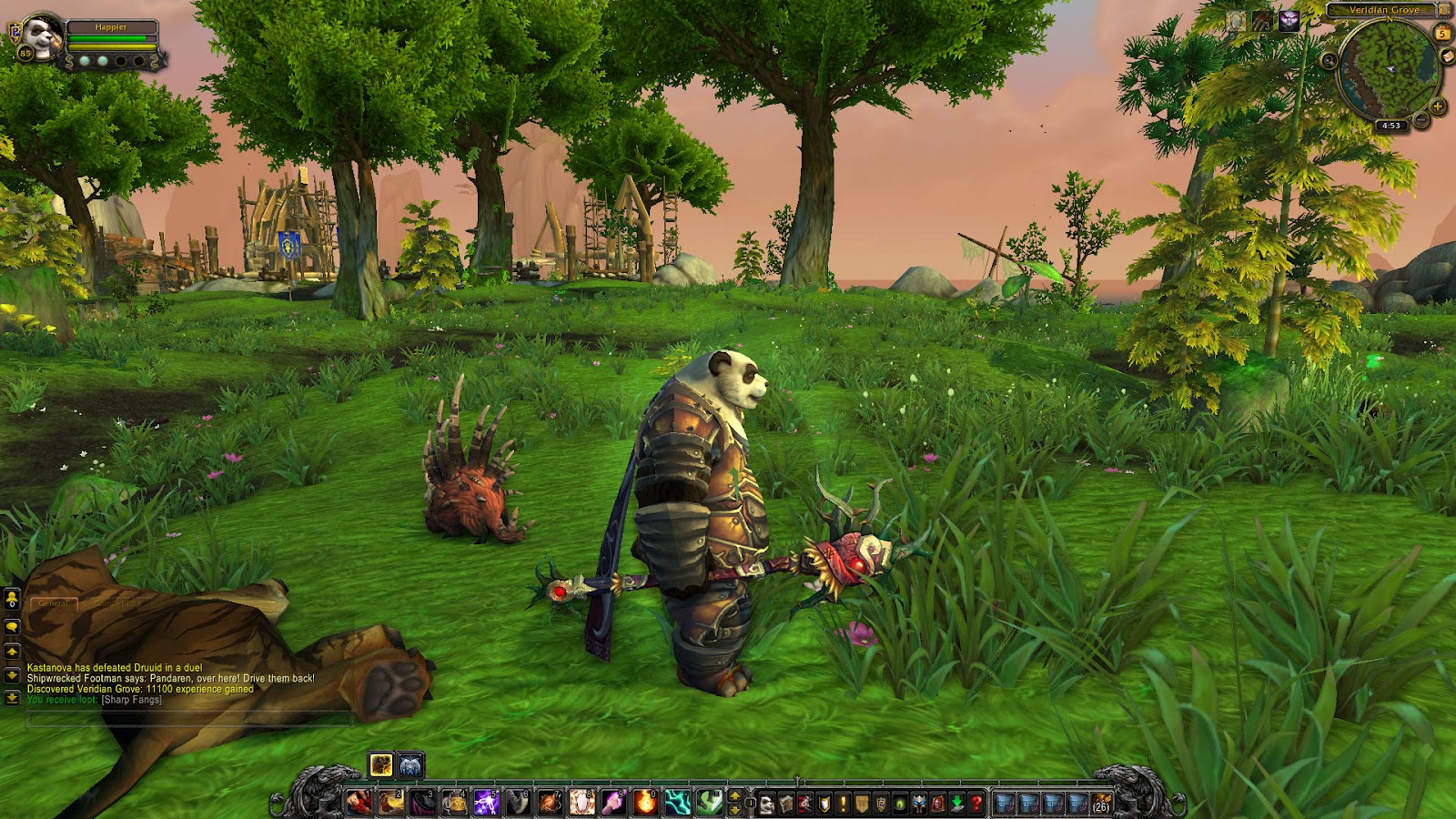 (By the way if anyone is interested, I think I know enough about how to tank with a monk now to run in a group and I plan on doing so many times this weekend. I’m on Gilneas and my name is Happier if you want to join me.)

Here are my first impressions of the brewmaster. I don’t understand everything yet, but it’s fun. I might have missed some skills too, but I’ll probably be posting a few blogs like these as the brewmaster evolves throughout the beta.

For reference, here’s a categorized list of the brewmaster rotational skills: 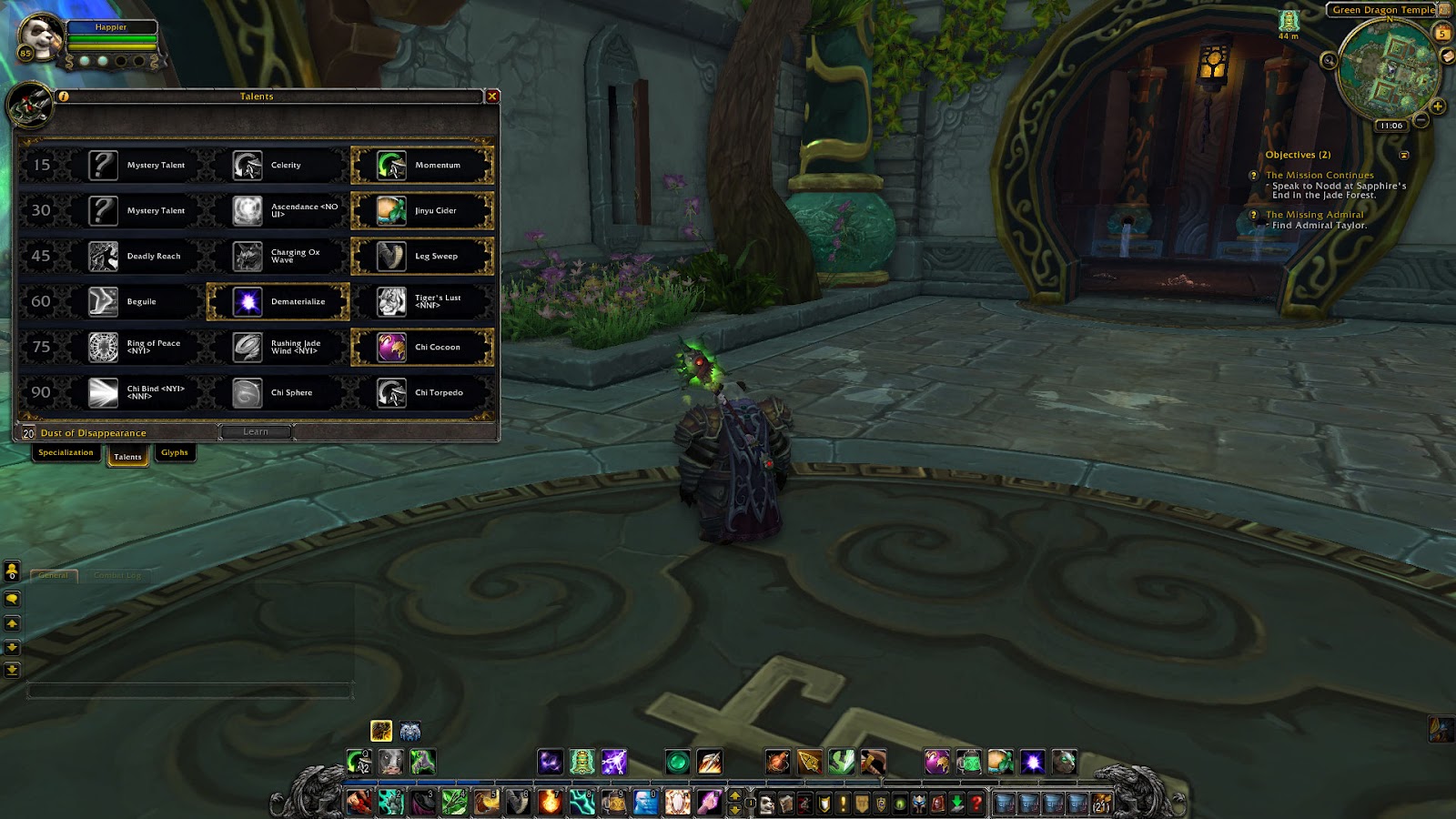 The talents I picked.

Overall, it was a fun experience. I felt pretty squishy if I forgot to Guard, but that’s okay. I feel like the brewmaster damage rotation is very simple, but the defensive skills provide a ton of depth. It actually feels like it’s easy to learn, hard to master, which I didn’t think was possible for this game. I was worried that introducing interactive tanking would scare away potential tanks because it was too difficult or intimidating, but on a monk all a beginner needs to do is Jab Jab Guard repeat and they’ll do alright. There’s a ton more complexity under the surface.

For example, instead of guarding you can use your chi to Shuffle. I haven’t found a whole lot of use for shuffle yet because guard just feels so awesome, but in theory it will be awesome as a mini oh-shit button to smooth out burst damage. You can also follow it up with a Purifying Brew, which removes the after effect damage of staggers. By the way, stagger works just like Stay of Execution in that the after damage occurs as a dot on yourself. 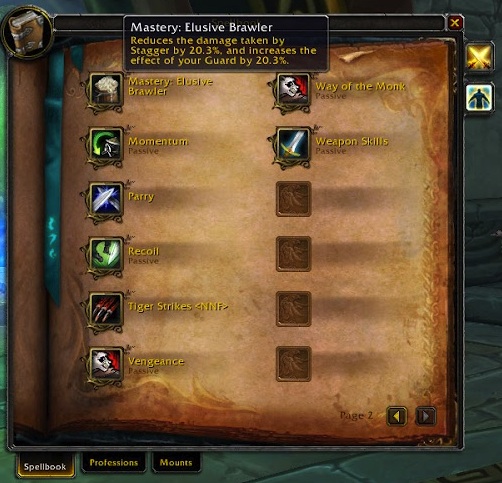 Since guard also temporarily increases your self heals, you can follow it up with a expel harm. Expel harm heals you for a decent amount (around 25k with vengeance) for an energy cost. So when spending energy, you basically have a choice between proactive defense (jabbing to generate a chi that can later be used on guard) or reactive defense (expelling harm to heal yourself). Expel harm also does a nice chunk of damage to your target, but it is on a 15 second cooldown.

Similarly, I haven’t found a consistant use for Elusive Brew. It is really strong and relatively cheap (half the price of guard). I think I had around 15% dodge baseline, so I dodged most of the time for the duration. You also get 5 energy per dodge, so it slightly contributes to future guards. (Of course, you’d have to dodge 8 times to get enough energy for just one extra jab, so the contribution is small.)

With all those cool abilities that reduce damage, I find it hard to use any of the offensive abilities that require chi. Tiger Palm increases the effect of your next guard by 5% per stack (up to 15%) but I found it’s just not worth it. To maximize your guard, you have to use a total of 5 chi (3 tiger palms and 1 guard), but you only get a tiny increase in the shield effect. For example, my average guard of 30k would increase to 34.5k. The alternative is to use that 5 chi on two guards and one other cool thing (maybe an elusive brew) and avoid MUCH more damage. If the effect was doubled or tripled (so each tiger palm increased the next guard by 10 or 15%), I might feel compeled to use it.

That said, when you’re just dpsing, Tiger Palm is what you use and it does decent damage for a pretty cheap price, so if that’s the intention than it’s fine to leave it as is.

The one skill that completely boggles my mind is Breath of Fire. It does a ton of damage if you have three stacks of dizzying haze up on your target, but bosses are immune to dizzying haze so it obviously isn’t meant to be a single target thing. But I can’t use it on AoE either because I need to use my chi for defense and it still only hits one target. If I’m going to be using chi on offensive attacks in an aoe situation, I’m going to use Spinning Crane Kick because it actually does aoe damage. I really can’t find a good use for this skill, which is a pity because it’s looks pretty cool. 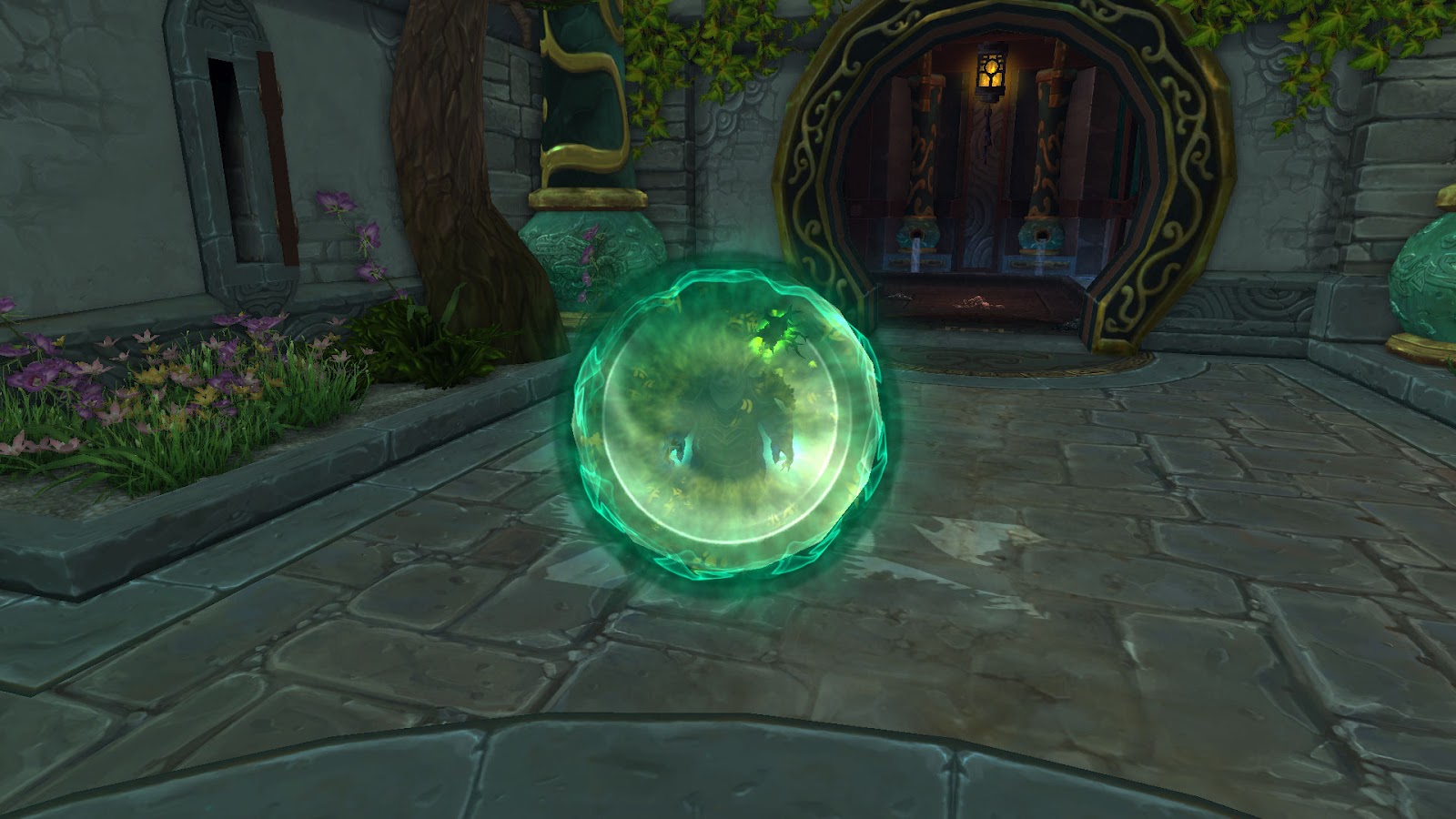 I think if they changed it to a cleave of some sort, it would be worth using in some situations, though even then Spinning Crane Kick might out perform it. It also has a strange range. It says 40 yards, and it might actually be 40 yards, but you can use it even without a target so sometimes I use it on a far away mob and nothing happens.

EDIT: Actually, it turns out Breath of Fire is a cleave effect, though the tooltip is slightly misleading. My opinion hasn’t changed about it’s expense and overall usefulness.

While on the topic of dizzying haze, I was initially confused how to use it. It doesn’t do damage up front, but it’s amazing for kiting packs. Fully stacked, it gives your enemies a chance to attack themselves 9% of the time. They will only attack themselves if they’d otherwise be attacking you, so you can’t kite them around infinitely expecting them to eventually kill themselves. I used this as an AoE pull most of the time, even though it doesn’t do damage. It’s sort of like pulling with a ranged demo roar.

Overall, monks lack burst threat moves. Jab is the only thing they can reliably use at the beginning of the pull, but it usually hits for about the same amount as an auto attack. Bears can open up with a giant mangle and that’s a huge threat bonus, but the best monks can do is a jab and one second later a tiger palm, or a flying crane kick for aoe. Most tanks have to wait a gcd for their big aoe threat move, so I’m not too concerned about that, but I worry about single target threat. Expel harm does pretty good damage when it actually heals you and when you have vengeance, but it can’t be the first thing you use because it actually needs to heal you to work.

I’m worried about the brewmaster’s dps in general, because in a full on defensive situation the only damage-dealing skills they will hit are jab, expel harm, and Blackout Kick. Expel harm is on a long cooldown, and blackout kick depends on a small (5%) chance to proc. All the other tanks either use a heavy hitting move to generate their resource (mangle, shield slam) or their defense is a big hitting attack as well (death strike, shield of the righteous). Maybe if a brewmaster had a higher parry chance then it would equal out with blackout kick procs, but right now I hardly do any damage.

EDIT: MMO-Champion had datamined some new changes to the monk that look like fixes to the above grievances about burst threat. Tiger Palm costs no chi for brewmasters, they will get a new burst aoe skill (though it has a 1 chi cost), and a reduced energy cost for Dizzying Haze.

Speaking of parry, my monk only had about 5% and no way to get more. The premade came with only agility and intellect rings, so I assume that Blizzard wants monks to use agility rings just like bears. Will it even be possible for a monk to balance dodge and parry like plate tanks? There’s always the option to reforge to parry, but I have a feeling that mastery will be the go-to stat for brewmasters most of the time. 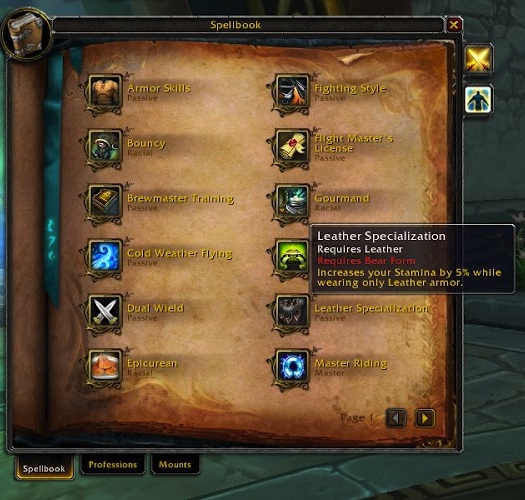 I guess they just copy pasted the bear leather specialization.

On the topic of stats for monks, mastery is obviously useful. Haste will increase energy gain, which might not be that great but more energy means more jabs and more chi so it does contribute to tanking. I can’t remember if a missed/parried jab generated chi or not. I think you didn’t get any chi, but I could be wrong. If that’s the case, then hit and expertise will be useful for tanking. Where does critical strike fit in? I didn’t see any places where crit was useful in any way.

Another strange thing I noticed was that my personal guard bubble stacked with the shields from the black ox statue (at least both shields appeared as separate buffs). The statue bubble isn’t as strong as the personal guard, and it only has 10 stacks which can also be consumed by your raid, with a 3 min cooldown, so it’s not part of the main defense rotation. It could be useful for tanking though. You also have to stand right next to it to use it. Leer of the Ox works like Stoneclaw totem. I haven’t tested it on a boss yet, but most of the time the mobs will kill it and you can’t use the clickable ability when it’s dead.

Overall, I like where the brewmaster is going, though it’s not perfect yet.