As brewmasters are starting to settle down into our niches and the MoP release date draws ever nearer, the theorycrafters fire up their Mathematicas (do theorycrafters use Mathematica? I wouldn’t know). This gives us regular folks an opportunity to squeeze their mind grapes and make a delicious alcoholic beverage from whatever tastiness we can gather.

In this week’s edition of mastering the way of the brew, we will cover optimal Shuffle uptime, Avert Harm paradoxes, and why monks are going to be super overpowered in niche cases.

Communism has a couple of excellent posts delving deep into the land of shuffle. Much of the math stems from discussions on Elitist Jerks (ugh, I’m going to have to start reading EJ again, aren’t I. I did not miss those forums during Cata).

In summary, we’re coming to realize that Shuffle cannot be maintained 100% of the time while tanking hard hitting bosses. Anyone who has tanked a raid boss in MoP would know this, but now the maths are here to prove that no, we’re not doing it wrong. It’s easy to keep Shuffle up all of the time when your stagger is low because you never have to use Purifying Brew, but this is not the case for raid bosses. Raid bosses typically hit hard enough that you have at least a yellow stagger ticking most of the time, and often you get a red stagger, requiring you to purify often. This means that an excellent brewmaster will often have to choose between using chi on Blackout Kick or Purifying Brew, a tough decision and I welcome it.

So far, most people agree that the optimal uptime is around 78%. Now, what does this mean in the real world? Admittedly, not much. This number will be useful when you’re looking at logs to monitor your performance, but there’s no way for you to actively aim for 78% uptime as that will not actually be the best for most fights, especially when you take into account down time, specific mechanics, and working with your raid team. The big idea to take away from this is that you cannot and should not try to keep Shuffle up all the time. Keep it up most of the time, but Purifying Brew is still incredibly important to your survival and overall damage reduction. Watch your Stagger stacks, purify them when they get high, and keep on shuffling when you can.

An interesting side effect of all these maths is a stat priority for damage avoided per second. This isn’t our final stat priority, as there are more important things to tanking than avoiding the most damage over a 10 minute period (like effective health, or gaming encounter mechanics), but it’s a great baseline.

So what does this mean? If you don’t know where to start or are working on an encounter that favors long term damage reduction, these are the stats you want to prioritize. Agility is obviously very good for avoidance, but it’s not twice as good as some stats, meaning that gemming for secondary stats will be important, especially if you’re not hit/exp capped. After hit and exp, most of our secondary stats (haste, parry, dodge, and crit) are surprisingly close. I still personally favor crit (timing Elusive Brew to cover any downtime in Shuffle does wonders for your healers), but most people will likely favor haste and I don’t blame them. Mastery is still low, but it will be incredibly strong for niche encounters that encourage active mitigation (which I will talk about below). 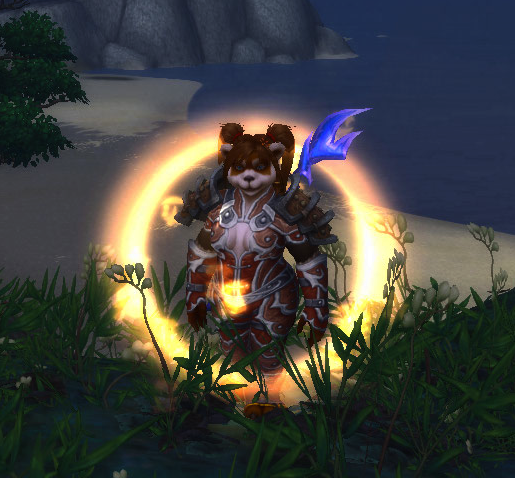 Some intelligent people have been discussing other mysterious aspects of the brewmaster, notably our raid cooldown Avert Harm and how it interacts with other cooldowns. So here are the most interesting things they discovered:

Sha of Fear vs. Brewmaster

Back in the Beta Class Balance Analysis thread, someone posted a great big spreadsheet that compared all five tanks in one (yet untested) encounter. The encounter in particular is heroic Sha of Fear. In this fight, the boss uses this ability against its primary target:

Thrash – The Sha strikes 3 times on every fourth attack.

In heroic mode, on the last phase it gets even more intense:

Dread Thrash – The Sha strikes 6 times on every fourth Thrash.

It looks like this encounter, the final encounter of the tier, will put active mitigation to the test. And this spreadsheet gets into the nitty-gritty details of how each tank handles it.

It gets pretty complicated, and I recommend you read the entire post for more details, but long story short, brewmasters will be incredibly strong for this encounter (surprise!). I’ll have to see this encounter in person before I make my final judgement, but these conclusions aren’t too hard to believe.

Another interesting tidbit is how useful our mastery will be for this fight, since it will allow us to shave off a decent chunk of the damage and we will easily be able to prepare to purify the resulting stagger. With a huge, predictable attack like this, it’s like this encounter was designed to make us look good.

It turns out that the paladin talent Hand of Purity reduces stagger damage. Depending on your raid group and size, this could be a big deal, though requires too much awkward coordination for my tastes. (Source)

Celestial Fists has a great write up of some new monk-only quests that appeared on the Peak of Serenity (the place that Zen Pilgrimage brings you). Every 10 levels or so you unlock a new quest that teaches you how to use some specific monk abilities. The quests award cool-looking staves, polearms, and belts (so many belts) that will be excellent for transmog.