Everyone knows that you have to marry just one MMO. With subscription fees and time commitment, there’s only room in the average person’s life for one massively multiplayer time sink. No woman or man can have it all. So for those of us who don’t want to be monogamous to our MMOs, we have to be (dun dun dun) casual. Or just really good at managing time.

So what’s a GW2 and WoW lover supposed to do? I can’t be a progression raider in WoW if I’m (shudder) casual, but I can’t become a PvP superstar in GW2 if I spend all my time dying to the disconnect boss in Mogu’shan Vaults.

I just have to do that thing I’ve never been too great at: managing my time wisely. I find the best two-day raiding guild and join up with them. Time commitment, check. Then the Guild Wars 2 developers already took care of the double subscription cost. Continue to be a cheapskate, check.

But do I really need two MMOs? I think in this case, both games satisfy my requirements for gaming in different ways. They’re different enough that you can justify it the same way you justify any two PC games. Portal and Modern Warfare are both first person games with guns that (sort of) take place in the modern day, but the objectives are completely different.

For example, GW2 does not have high end raiding. It has five man dungeons, which we are told are sufficiently difficult, but its idea of end game content is doing more of what you were doing while leveling up, while raising the difficulty. You don’t even get better gear from those difficult dungeons, you just get cooler looking gear.

At first this scared me, because my original plans were to quit WoW for this younger, prettier game. But now that I’m sharing my time, I’m happy about it. I wouldn’t want GW2 to adopt WoW’s endgame, because that doesn’t make sense in the context of this game. Getting to level cap isn’t the goal, and it’s not what you have to do before playing the real game. It’s more of a “enjoy the journey” thing. This can totally work for an MMO, as long as they stick to it.

Though as I’ve been saying, I still have that raiding itch I want to satisfy. Luckily, that’s what WoW is best at. As much as raiding in WoW can sometimes suck, few MMOs are able to compete with the complex PvE game it provides. 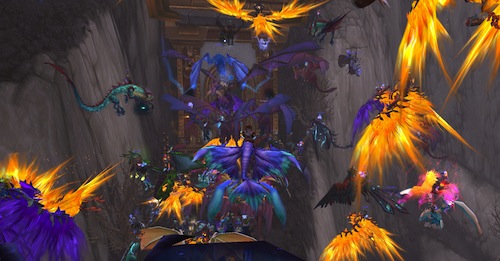 Both games would lose some of their strengths if they tried to satisfy all their potential customers. Sometimes I feel like WoW goes way too far in trying to do this, but at least progression raiding is still a thing and they will probably never take that away (at least for the first few weeks of a tier). If GW2 decided to have 10 man raids where you got the best gear and only level 80s could attend, that would crush the play-with-your-(casual)-friends aspect of the game. And if WoW took out 10/25 man raids, then there wouldn’t be a point to it any more. (Dailies? lol)

Similarly, I want to do PvP, but it’s difficult to enjoy WoW PvP when you’re just starting (or after you’ve taken a two season break). (It’s also just bad in my opinion, but I’m also bad so don’t trust my judgement there.) So instead, I look to GW2, which provides hot join and massive zergfest PvP, and that requirement is satisfied. 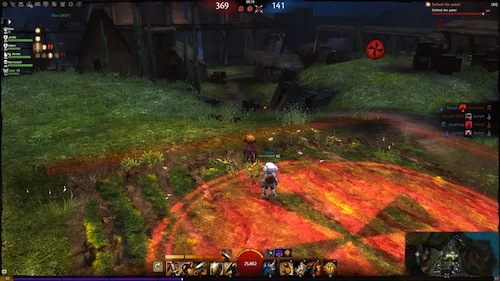 I call this my MMO needs grid:

Different games excel at different, often opposite, things. And I’m okay with that.

And don’t worry, I will still be pumping out tanking guides for WoW encounters before most people attempt them. I will just be talking about other games as well (as I have been for the past three months).