Despite being the quintessential blog topic, I’ve never documented my beginnings in World of Warcraft. The major reason being that I’ve (rightfully) assumed it’s damn boring. But today you’re going to get it because I’m tired and had a disappointing raid week and I don’t want to have to talk about Vengeance changes.

I was a freshman in college and joined a couple of my new friends on their way to the midnight release of some game that cost money (therefore, I didn’t play it). I went along because I had a crush on one of the guys (and both had a crush on me), and I just wanted to be social. I did not buy the game, which was The Burning Crusade. There were lots of nerds there and staying up until 1am was surprisingly fun. I watched while my friends installed the expansion and they previewed the new races. One of the races had a weird curvy back that looked uncomfortable.

Before this day, my interactions with Warcraft were limited. One friend did a lot of battlegrounds on his night elf hunter (which I originally thought was a dude night elf, but it was in fact a lady). Another raided on his resto druid. I watched the raider defeat Ragnaros and I was really impressed that a boss had voice acting and dialogue.

I thought his druid was pretty cool because it turned into a cat and a bear and I had never seen that before. Taurens were pretty unique, too. He let me roll a druid on his account. I got to level 10. I had trouble with moving around with a keyboard and my mouse because all the other PC games I had played up to this point used click-to-move. I was surprised to learn that keyboard movement made me feel much more involved with my character than click-to-move.

I must have had fun with that because pretty soon after the release of The Burning Crusade, I ventured out and bought vanilla WoW. My first screenshot dates Jan 25, 2007, so it was at most 10 days after my midnight adventure to GameStop. I created my own tauren druid and her name was Kiwitori. My screen name in previous games was “Kiwitari” with an “a”, and at some point I had the idea to include my real name (Tori). But I pretty quickly decided that it looked stupid and the name drove me nuts until the name change service became available many months later, when I became “Safari”. 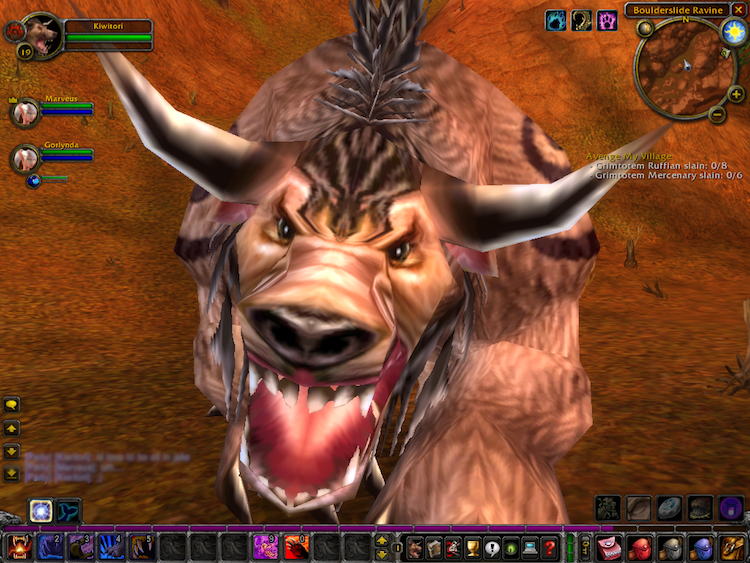 Three dorm buddies agreed to roll on Maiev (for reasons I don’t think anyone understood), so we started out with a decent group for doing dungeons. My first experience tanking was Ragefire Chasm, which we three-manned. The paladin and warlock assured me that this was an easy dungeon and that I would do fine, even though tanking was a completely foreign concept to me. I guess the run went smoothly because that’s all I remember.

I wasn’t completely new to MMOs. I had played quite a few free Korean MMOs prior, but they weren’t very good. However, concepts like threat, where it wasn’t just dependent on proximity and damage, were very strange. When Kiwitori first learned Rejuvenation, I had my mind opened to heals that weren’t just… heal. A heal over time? Who thinks of these crazy ideas.

I liked playing the game because it was easy to quest in small bursts. Got an hour or two between classes? I couldn’t possibly do homework with that little time, so might as well get to level 45. I loved the cat and bear form running animations. I still have many old screenshots of bears and cats strolling around barrens. 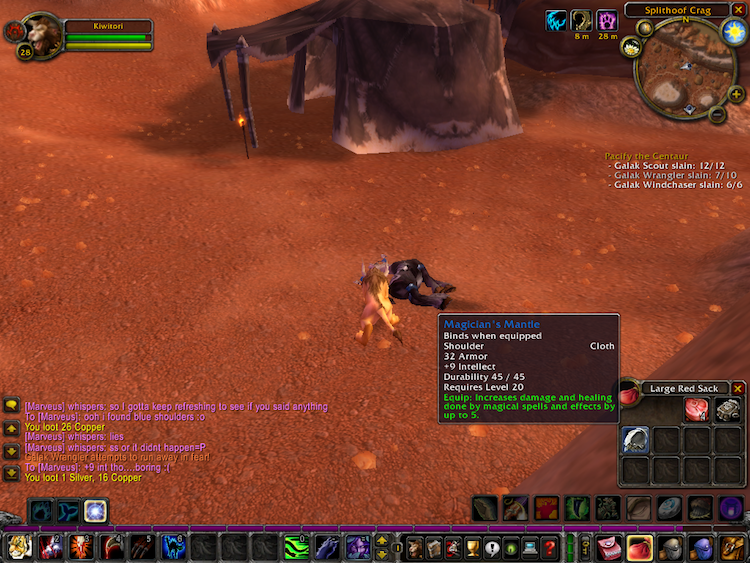 My first blue item random drop. It was very exciting.

I leveled much faster than my friends. I’ve always been a good leveler. Two of my dorm buddies decided to return to their previous characters or quit, so it was only me and the paladin. I forced myself to slow down and match his pace by doing lots of battlegrounds. To this day, I don’t understand how I did so well in those battlegrounds. I just loved PvP on a feral druid. My first epic item was a belt or something I bought with honor around level 40.

At level 60, when I went out to buy Burning Crusade, the guy at Game Stop told me to be careful or else I could get addicted. I don’t remember what my reaction was. Probably indignant, because I already knew what I was getting into. 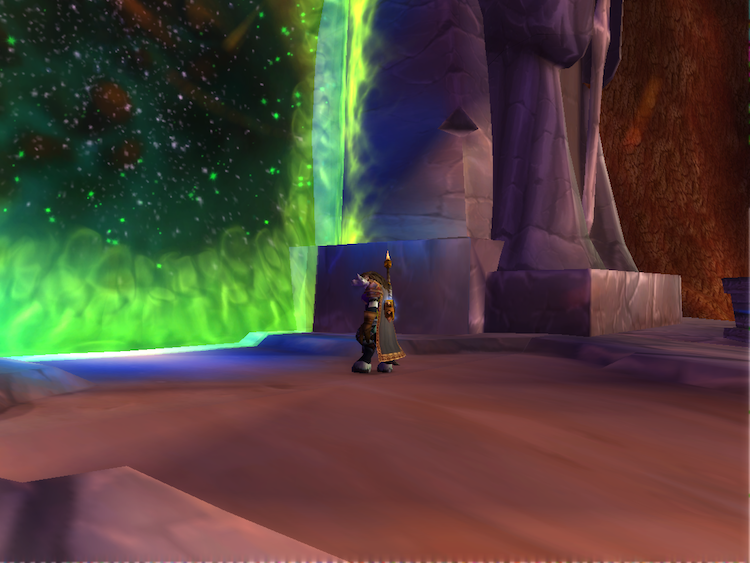 When I reached level 70, I joined a guild called “Large Brown Sack”. I insisted that I would never go resto. My friend who’d played a resto druid had warned me that most guilds only recruit healers. Luckily, ferals were actually pretty useful back then. I tanked Karazhan and did good dps (even though bleeds didn’t affect all the undead in that raid). My paladin friend healed. My second epic item was Bracers of the White Stag, which I equipped because it had much more armor and stamina than my green agility bracers. At least I knew that intellect was not optimal, though I didn’t realize that agility was useful for tanking.

We slowly cleared Karazhan, way behind the curve. One time I went to my dad’s company picnic and some of his coworkers conversed with me about WoW. They played a shadow priest and a mage and they were clearing Serpenshrine Cavern. I didn’t really understand what they were talking about. Maiev was a small server and no guilds were running big raids yet. But I was really proud of myself because we had just downed Terestian Illhoof. At least they were impressed that I was tanking. 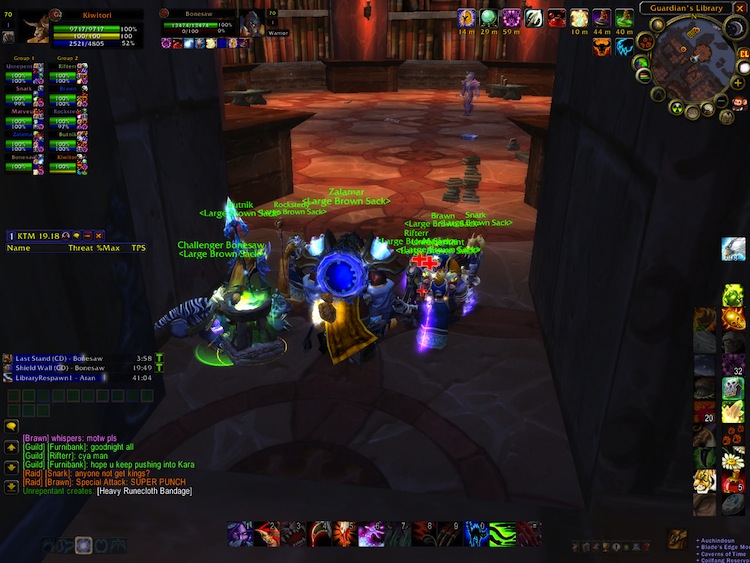 Large Brown Sack vs. our nemesis

I can’t remember why I started tanking. I mostly leveled as cat, but I think I raided as a bear because I felt useful. I enjoyed the hybrid nature of ferals and loved being competitive in two roles. As I gained more experience, I found myself enjoying the utility of tanking more than dealing damage. (I may have also been influenced by the poor scaling of cat form. And not like how “poor scaling” is tossed around today. I mean, our paw dps was what, 42 for the duration of the expansion? The ridiculous amount of attack power on our weapons wasn’t enough to make up for no weapon dps.)

Alongside my progress in Karazhan, I PvP’d. I knew that Merciless Gladiator’s Maul was the best dps weapon for feral druids at the time, so I did arenas. PvPing as a feral was unconventional in those days. Resto was king, but I couldn’t break away from my beloved hybrid playstyle. I loved bouncing between bear and cat, then to caster for heals. Feral PvP gear actually had +healing on it, so our heals weren’t terrible (though our dps was). I did experiment with dreamstate resto in later seasons. Dreamstate was a healing build that included moonkin form and had the best mana regeneration. I actually got better ratings as feral than resto, which tells you quite a bit about my healing skills.

Eventually, Zul’Aman came out and I was lucky enough to join a raid with one of the better guilds as a pug. I guess they were pretty impressed by my power-shifting dps (back then, druids had a talent that granted 40 energy on shifting into cat form, and you could increase your dps by shifting in and out of cat form quickly at low energy, e.g. power-shifting), so they extended me an invite to their guild. I said I’d think about it.

A few days later, whatever guild I was in (according to my screenshots, I was no longer a member of Large Brown Sack. I don’t remember why) was getting really obnoxious so I gquit as a “joke”. I was the only one who knew it was not really a joke. Then I joined my new guild, Power Word Awesome, in their raid of Serpenshrine Cavern. My paladin friend reluctantly tagged along.

Power Word Awesome was sort of famous on that server for being theorycrafting nerds. I guess back then theorycrafting wasn’t so wide spread, so you were actually special if you managed to google how to play your class. We cleared SSC and TK pretty easily, trying to catch up with the rest of the crowd. I’m not sure how our progression compared with other guilds, but I think we got all of Hyjal and Black Temple before they removed the attunements. We killed the Eredar Twins in Sunwell the night before the WotLK pre-patch dropped. 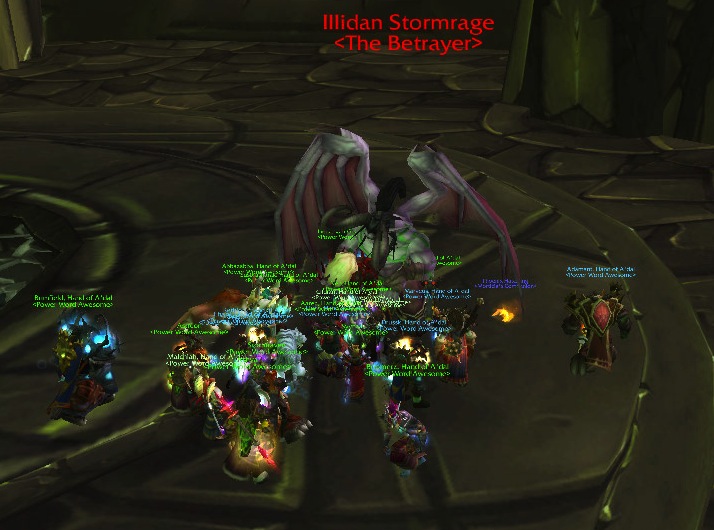 Power Word Awesome with our favorite buddy. A rogue told me I was good at tanking the fire elementals.

On the night of Wrath of the Lich King‘s release, I bussed over to GameStop with a friend and waited in line for my collector’s edition. The busses stopped running after midnight, and none of my friends with a car offered to pick us up. I walked nearly three miles in the chilly November night to get home. I felt like a real hardcore raider.

Speeding to level 80 with that guild was one of the best times I’ve ever had in WoW. To this day, whenever I hear the music in Howling Fjord I remember happy feelings. We got all the server first titles (because our server was pretty bad).

Power Word Awesome was the last guild I ever felt a strong social connection with. I’m still Facebook friends with some of them. I met quite a few members at Blizzcon ’09. We went out for spaghetti and I discussed if I would race change to a troll druid when Cataclysm dropped. It was wonderful.

But sadly, real life events forced me to transfer. But that’s for another time…