The level 30 talents focus on healing, specifically multi-person healing and damage. This tier was largely ignored by Brewmasters until Throne of Thunder, where the chi costs were removed and they became free to use. With that simple change, they went from unimportant to absolutely vital to our personal survival strategies. 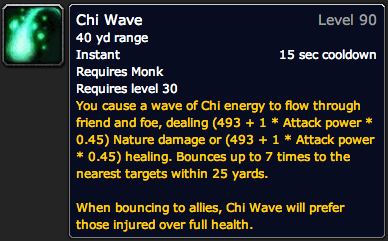 Favored in almost every situation because it provided the best self-healing. (Though it requires a self-target macro to do guarenteed self-healing.) 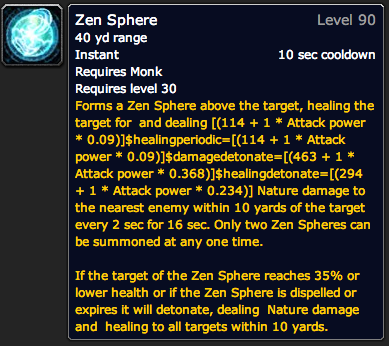 Almost never used, since the heal-over-time was weak, the emergency low-health healing similarly so, and the AoE potential was often unreliable, insignificant, and with a small range. 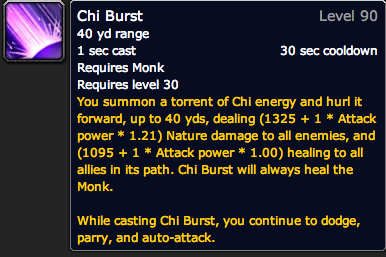 Used sometimes when raid AoE damage was more threatening than damage on yourself, or as a ranged AoE tool. Pretty good at both those jobs, though it’s actual usefulness depended on the encounter.

This tier had the potential to be interesting, but I have a feeling it’s hampered by having to be useful to all three specs. What a tank considers an interesting choice is not what a healer or damage dealer considers interesting.

If it could specialize in one or the other, it could offer more options. As a tank, I’d love to see this tier focus on self heals and look something like this:

However, these might not be compelling choices for a damage dealer or healer, since the differentiation between a self HoT, a self burst heal, or a self absorbtion doesn’t make a huge difference for non-tanks. The varying cooldowns could open up different useful niches for those roles, but it’s unlikely to be good enough.

AoE healing could be interesting to all roles, as long as it doesn’t subtract much from our primary roles. This is where the free-resource cost becomes important (as much as I hate that aspect of this tier), since we already know from experience that attaching a chi cost to these makes them unattractive to windwalkers and brewmasters. Is there a way to make the AoE portion worthwhile, while removing the self-heal portion that makes the current iteration uninteresting to brewmasters?

Chi Burst is the ability to aspire to, if this were to be the case. It has a long enough cooldown to keep it out of rotational usage, and a big enough heal to be worth casting (as long as everyone is grouped up). If we applied the cooldown and relative magnitude to the other talents, maybe our choices could look like this:

I’m not really happy with that Chi Wave version, since smart heals will be going away. Maybe it could change into something like Halo (and look like a real wave!), or some other implementation that competes with Chi Burst by not requiring strict positioning but healing for less overall, or healing unreliably.

I’m also not sure whether the damage aspect of these talents is worth keeping. We already have an AoE damage tier. However, they might not be attractive to windwalkers if they don’t deal damage. I supposed if they kept a moderate cooldown, like above, that they would be useful in uncommon aoe situations. If they deal variable amounts of damage, that risks putting the higher dps choice at odds with the higher utility choice. In theory, that would be an interesting choice, but in practice it rarely turns out that way.

There’s also the problem of all three spells being free and two out of the three having short enough cooldowns to be rotational. Rotational skills that are free don’t meld well into a kit because they don’t interact with your other skills, either directly or indirectly by sharing a resource. You just use them on cooldown. Of course, the healing talents once had a chi cost, which made them almost unusable by Brewmasters because the healing wasn’t enough to justify the loss of our other active mitigation. If they all had a long enough cooldown, then the cooldown becomes the “resource” and they retain some interesting interactions that way. To play devil’s advocate, it’s also nice to have one spell that doesn’t require set-up, for those times you make a mistake with pooling resources.

I’ve played around with the idea of having this tier modify Expel Harm, instead of granting its own skill. To a tank, Chi Wave and Expel Harm fill almost exactly the same role: instant self heal, which makes them candidates for merging. That would easily solve the resource problem, but I don’t like tying our vital self-heal to a raid heal. If the raid healing potential was removed, then it would be an interesting decision for tanks and potentially dps, but unlikely to be interesting for healers. If Blizzard somehow decided to make this tier provide only self-healing, then attaching effects to expel harm could be an interesting direction.

At the very least, I’d like to see some adjustments made to Zen Sphere to make it a useful choice. That could mean increasing the HoT, or allowing it to fill another niche. Chi Wave vs. Chi Burst is an interesting choice. Even if you only choose Chi Burst in special situations, it feels genuinely powerful in those situations. Sometimes I try out Zen Sphere just to make sure I’m not missing anything, and while it looks cool, it never competes with the simple utility of Chi Wave.

Speaking of Chi Wave, I would like it to automatically heal the caster first without requiring a macro. That’s probably a Brewmaster-specific concern, but if you’re new to Brewmastery then you’re missing a huge chunk of your toolkit if you haven’t discovered that macro yet. It’s a game-changer.