Level 75 talents provided defensive skills of varying situational utility. Diffuse Magic was the most situational and most powerful, reducing magic damage by 90% for a brief 6 seconds. Dampen Harm was moderately situational, reducing all damage by 50% but requiring a high number to trigger and only reducing 3 hits. Healing Elixirs was the most general, useful in all fights but not nearly as powerful. Of the three, Healing Elixirs was the only one to see significant change throughout the expansion. Initially, it simply tied a nice heal to our brew skills (Purifying, Elusive). It wasn’t very popular early on (though I still found it useful ), but once it added a low health trigger and prevented healing at full health, I think it gained some favor. 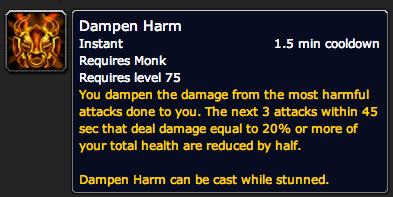 Good for large physical. Surprisingly situational, since it only has 3 charges and those will only trigger on very large hits. It is often only useful against predictable things. That means it’s great against Nazgrim’s Execute, but horrible against Malkorok’s regular melees. You can’t really use it as an “oh sh**” button.

This is the closest thing to an “oh sh**” button of the tier. Lots of people overlook this talent, and it’s true that Healing Elixirs isn’t as powerful as Diffuse Magic and Dampen Harm against predictable attacks, but that’s not its niche. Healing Elixirs can find a use in almost every fight (it just doesn’t work well for the gimicky healer ones), it will heal you for a nice chunk during unpredictable low health events, and it provides a vengeance-independent heal with moderate control.

This is one of my favorite talent tiers, and the first one I suggest others to play with and reevaluate for every encounter. This tier has the largest impact on whether you survive or not, and since every choice has its niche, it makes swapping this tier around a requirement.

Sometimes I feel like Diffuse Magic and Dampen Harm step on each others toes too much. They both excel at big, predictable events, but fall short for panic moments. In the end the big difference is magic (though at a very high reduction rate) vs. any type of damage (at a moderate reduction rate). Most of the time, that conflict is good — it makes the final decision tough. But it would also be cool for this tier to offer the choice of: big reduction against predictable damage, moderate mitigation against any type of damage (panic button), and a passive steady mitigation of damage. As monks, we don’t really need a reliable damage mitigation cooldown because we have ways to handle unpredictable damage elsewhere, but it’s just a thought.

I have a soft spot for Healing Elixirs because it’s often misjudged by the community as being weak. And yeah, a 15% heal isn’t nearly so impressive as 50 or 90% damage reduction. But the strength of Healing Elixirs really becomes apparent in practice. Many fights don’t offer easy places to activate Dampen Harm or Diffuse Magic, and on some fights you frequently drop low enough to trigger the heal. Optimal use of Healing Elixirs requires quite a bit of work, and a slight change in playstyle. You start thinking about that heal, and you learn to time your Elusive Brew and Purifying Brew for when those heals will be most effective.

Overall, this tier doesn’t need anything to change. It’s pretty much perfect.