(Here is my little backstory for my Draenei Brewmaster. A draenei brewmaster seems a bit unconventional so I had to come up with a good reason why she does what she does.) 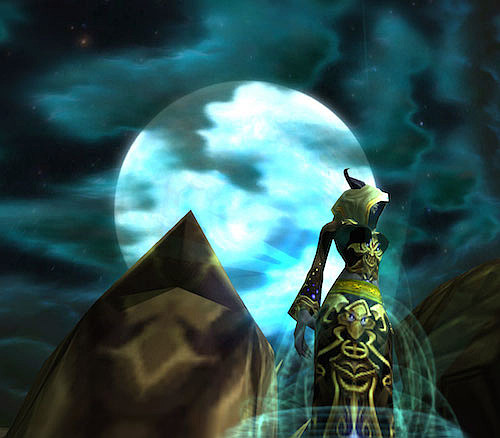 Sunnier the Draenei was born on Draenor, and grew up in the Temple of Karabor, where she served as a priestess of the Naaru. Sunnier liked this simple life. The temple was beautiful and quiet, her chores fulfilling. She enjoyed making potions and elixirs of healing, and studying herblore. While there was conflict on Draenor with the native races, Sunnier never sought it out. Her sister, Cloudier, did more than enough danger-seeking for the both of them.

(Cloudier was my draenei hunter. And Sunnier is an alchemist, and a combination of alchemy and healing sounds like a good lead in to mastery in brews.) 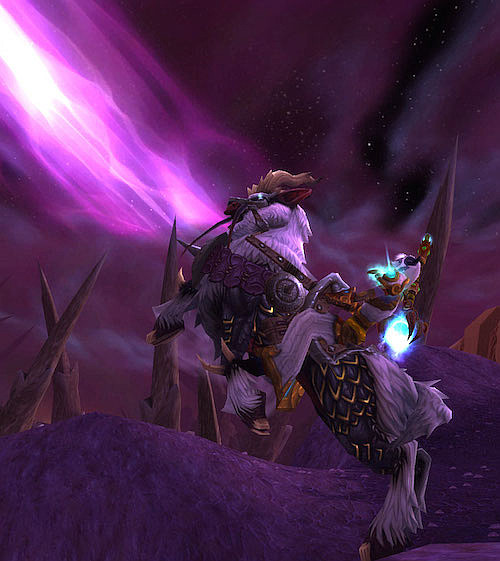 When the draenei fled from the demons and orcs, Sunnier and her sister were safe aboard the Exodar. Sunnier didn’t care much for this new world they crash landed on. She longed for the bright moons and familiar fields of Draenor, and hated this foreign Azeroth. She remained on the Exodar, serving the Naaru who came with them, content to ignore the outside world. Cloudier was the opposite and explored the new world to the fullest extent.

At some point, Sunnier and Cloudier were in southern Kalimdor when Theramore was bombed. They tried to get there quickly to help heal those who may have survived, but got captured by roaming Horde en route. They were taken to Orgrimmar with other prisoners of war.

Imprisonment in Orgrimmar gradually got worse and worse. Eventually, gladiator-like rings showed up (we see some of those in Siege of Orgrimmar). Many prisoners suffered and died in the process, included Sunnier’s sister. Even as an experienced hunter, she couldn’t defend herself without her bow or wolf.

(I changed my hunter’s race to tauren, so she had to disappear somehow.)

Similar to the original pandaren monks, Sunnier managed learned weapon-less self defense while in captivity. Her mentor was an orc dissident, and they bonded over their shared memories of Draenor. Her blossoming skills in self defense kept her alive in captivity.

When the Siege of Orgrimmar began, Sunnier and her orc mentor and some other prisoners used it as a diversion to escape. They went their separate ways, with Sunnier joining the Siege to avenge her sister. She normally wouldn’t want to put herself in danger, but this was a special circumstance. In her quest to punish the orcs that imprisoned Cloudier and herself, she decided that taking the offensive would be the best use for her knowledge of self defense and healing elixirs.

(This explains her only showing up a bit after Siege of Orgrimmar was released, since i played a pandaren before that.)