I’ve personally melee dps’d and tanked Onyxia (phase 1) and Nefarian (phase 3) in this fight. Heroic Nefarian is more difficult than Heroic Valiona and Theralion, but easier than Heroic Cho’gall. We used 3 tanks for this fight. 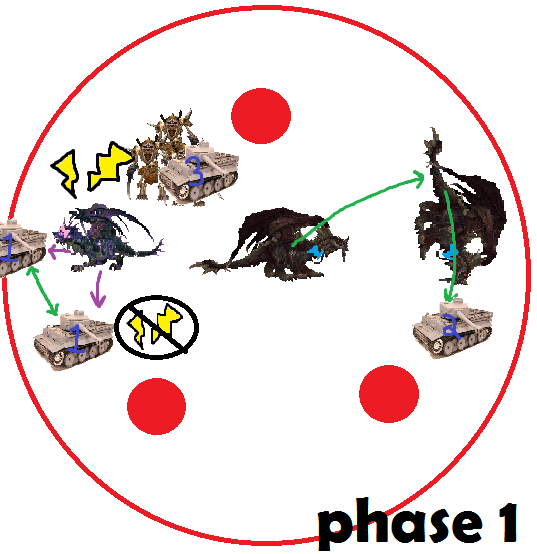 I know, the pillars are switched. Deal with it.

In normal mode, you might not bother flipping Onyxia around. But in heroic mode, the damage and stun component from Tail Lash are too much to handle, so the Onyxia tank must rotate her 90 degrees. Boss timers for Lightning Discharge aren’t always accurate. As the tank, look at her sides instead. When they start to crackle with electricity, you have about 5 seconds to turn her. I usually wait 2 or 3 seconds to minimize any Tail Lashes on the raid, but if you’re not confident about the timing, it’s better to tail swipe the raid than to electrocute them. Turn her back to her original position once the Lightning Discharge is done.

For cooldowns in phase 1(and this goes for tanking Nefarian, too), try to have a minor cooldown up for every Shadowflame Breath. As a bear, I rotated Barkskin, Mirror of Broken Images, and Frenzied Regeneration. During Nefarian’s Electrocute, I used my major cooldown, Survival Instincts.

These should be picked up and kited by a 3rd tank, preferably a shield tank. They’ll kill themselves pretty quickly.

Swim about this far away if you have Explosive Cinders.

Here is a power aura for this (open power auras, click “Import”, copy-paste the funny looking string from below),

If you’re tanking Nefarian, you have to slowly spin him around so that the adds and their tank don’t get hit by Shadowflame Breath (which revives and refreshes Bone Warrior energy, which makes them more difficult to kite) or Tail Lash (which reduces the add tank’s avoidance to 0 and will usually kill them). The add tank’s healers will usually be somewhere near the add tank himself; you cannot let them get hit by a Tail Lash either. Always keep an eye on the add tank and rotate Nefarian enough to keep the add tank in the safe zone.

At this point, the tanks need to save their cooldowns for Electrocute. Our tanks switch between their minor cooldown and their trinket, saving their other cooldowns for when unexpected bad things happen.

How My Raid Did It

These aren’t from me but from other members of my guild. There’s a ranged perspective and a melee perspective.