Worgen are special. All the other druidic races have logical coloration of their feral forms. White hair? Well you sir get to be a white bear! Brown fur, here’s your brown lion. Green mohawk, green kitty. Logical.

As someone who spends an average of 70 gold a month at the barber shop, I am in an excellent position to document the various natural Gilnean hair colors and how they correspond to the unnatural feral forms. The colors are listed in the order that they appear on the character creator and hair stylist, starting from black.

The black forms make the most sense. Pick black hair, either as a guy or girl, and you’ll get a black bear and cat. The bear and cat forms match, with yellow druidic markings and eyes. Cats have purple accessories, bears have red. Overall a solid combination. Bears have a bit of a blue tinge to their manes, which is the closest you will get to the cool pastel colors of the night elves.

Second is the red form. Probably the most fascinating worgen form, as I’ve never seen a red bear or lion before. For female humans, pick the dark red/auburn hair color. For male humans, pick the light brown (almost dirty blond) hair color. Why the two hair colors are so different between the sexes, I don’t know. It makes just about as much sense as a bear bright pink eyes. This is my guild’s favorite cat form; I think because of the green eyes. Too bad you shift into some sort of pale, diseased bear.

Third is the wild card or brownish feral. The cat form is brown (again with the crazy pink eyes), but the bear is a kind of blond color and doesn’t match the cat form at all. At least the humans are similar, each with a reddish brunette hair color. The green eyes and blond mane on the bear make for an unusual and interesting combination, though I think there are too many colors going on when you add the purple druidic marking and dark green bracers.

Fourth, the color that I am currently using, white forms. Of course, it totally makes sense that a grayish-white animal with blue markings comes from a human with fiery red hair, right? I like this bear/cat combo because of the icy blue eyes; I think it makes for a chilling and friendly tank.

The fifth and final option is the gray form. Humans with a copper hair color turn into gray animals with dark manes and red accessories. This is the most worgen-like form in my opinion, because of those wild orange eyes. They just look so feral. Worgen commonly have gray fur, so this form matches the average cursed Gilnean very nicely. And red for BLOOD, because worgen are CRAZY LIKE THAT.

And finally, here is the complete set for your hair coloring needs. 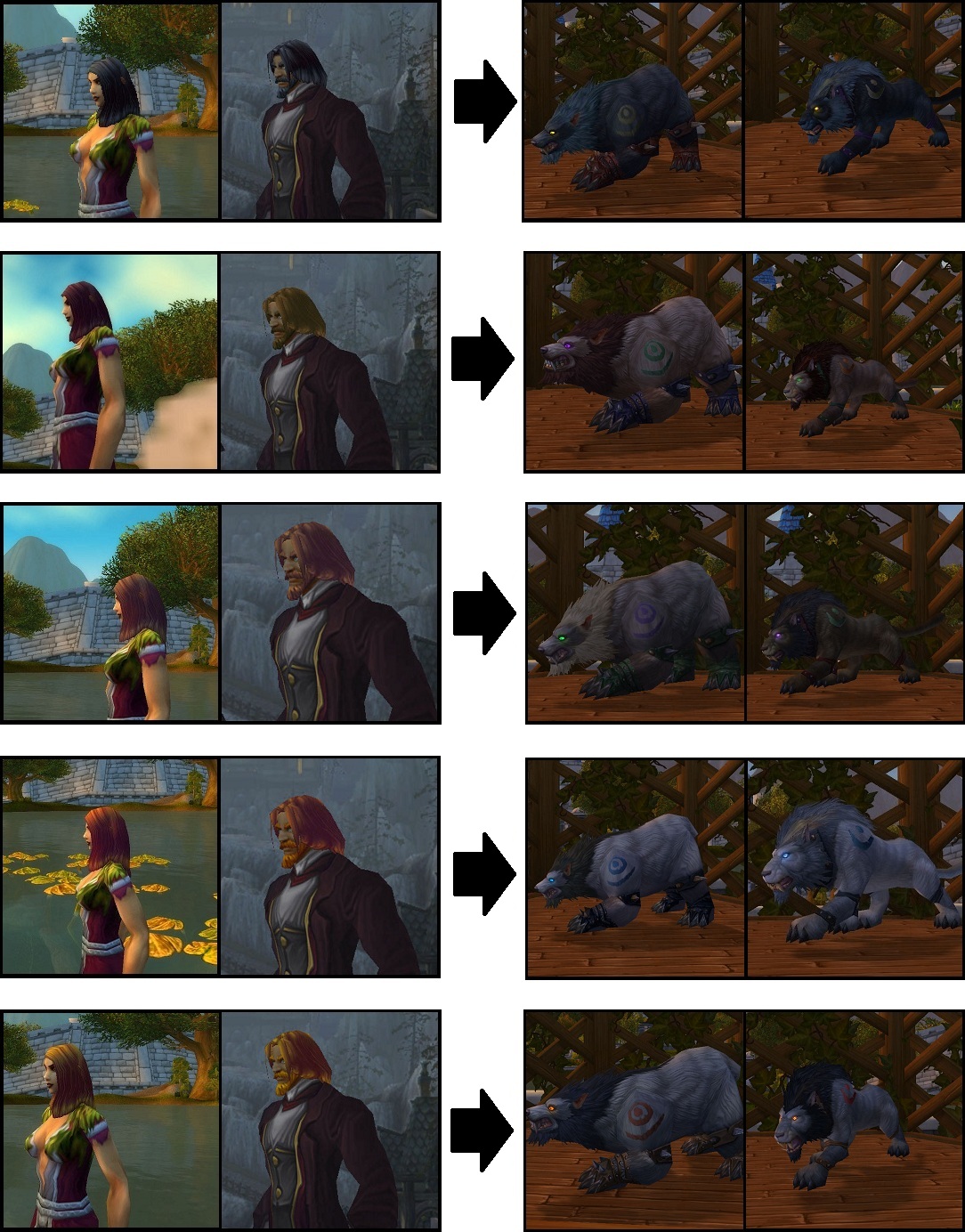 On a related note, although it can feel unnecessary to limit Gilneans to reddish and black hair colors, I love how it unifies them as a nation. Stormwind is a melting pot of different human nations, from Lordaeron refugees to natives of Elwynn Forest. In stark contrast, Gilneas is an isolationist country that blocked all other foreign interactions until they were forced out of their homeland by the Forsaken. It make sense that they never got enough immigrants to make blond hair or even brunette hair a common trait. Gilneans all look like they’re of the same nationality, which leads to greater immersion into the game and its story.