I primarily log into beta these days to see if pandaren have any more customization options or access to the barber shop (no, not yet), but today was a special build day and I wanted to see if Zen Pilgrimage worked yet (it does). Thankfully, lady pandaren also keep their hair when the UI reloads and that’s pretty cool. Then there were some other things I noticed, but one at a time please!

This is a glyph that grants you a new skill, Zen Flight. This ability is an instant-cast flying mount that goes a little slower than ground mounts. When you use it, your character goes into their meditation stance, sits on a trailing cloud, and receives glowing green hands. It is awesome. Sure, the sound is kind of annoying, but the ability to fly in Pandaria before level 90?! Way cool. For the curious folks out there, Zen Flight breaks on damage (including stagger), but applies a parachute buff if it’s canceled while you’re in the air. 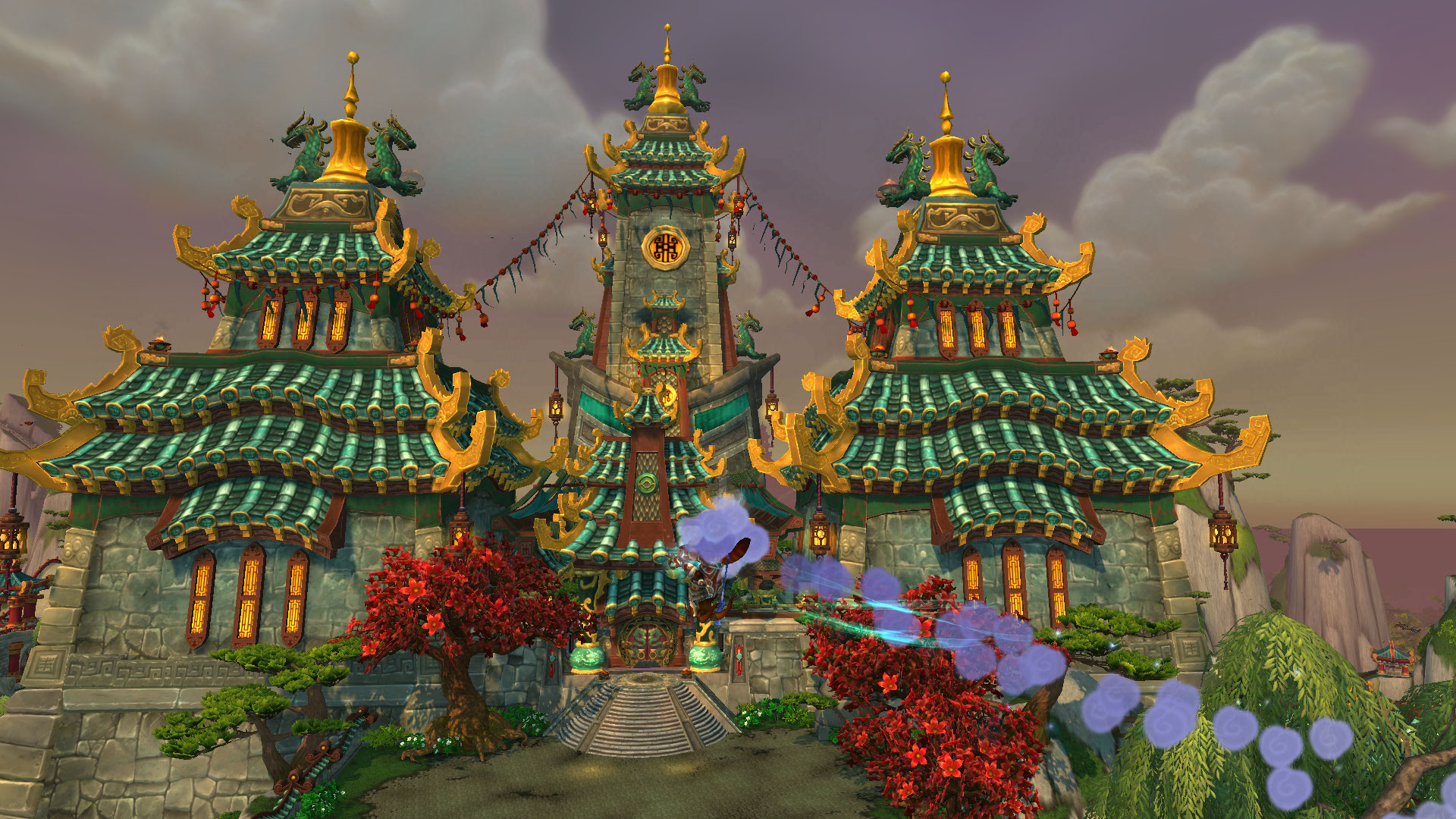 Flying upside-down at the Temple of the Jade Serpent

(By the way, you can buy glyphs in the Temple of the Jade Serpent from Flaskotaur.)

Monks can now actually use this skill. It’s nothing super special, just our version of Teleport: Moonglade. When you use it, you teleport to a place called Peak of Serenity in Kun-Lai Summit. There you will find a handful of monk trainers and students. The skill actually changes to Zen Pilgrimage: Return if you’re on the Peak of Serenity. The return spell returns you to a spot near your original location. (For example, I initially used the spell atop Temple of the Jade Serpent, and when I returned I was on the ground floor of the temple.) 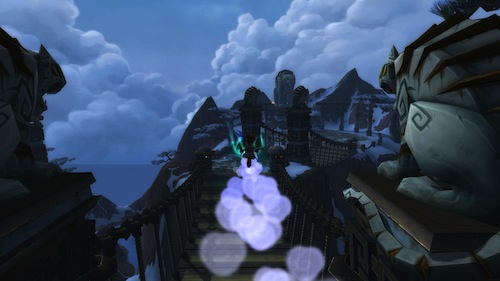 The Brewmaster’s signature ability is all sorts of crazy right now. As of the latest patch it only generates 1 Chi and deals 1.2k damage. I’m pretty sure these are bugs, especially give that the tooltip says it gives around 1666 Chi.

You might be able to argue that the chi reduction was intended because Keg Smash was just a kitchen sink ability (highest damage chi generator, cleave, weakened blows applier, dizzying haze applier, all on top of two chi), but I did like having a super ability that my rotation revolved around. However, since it’s currently bugged in more ways than one I am going to hold off judgement. 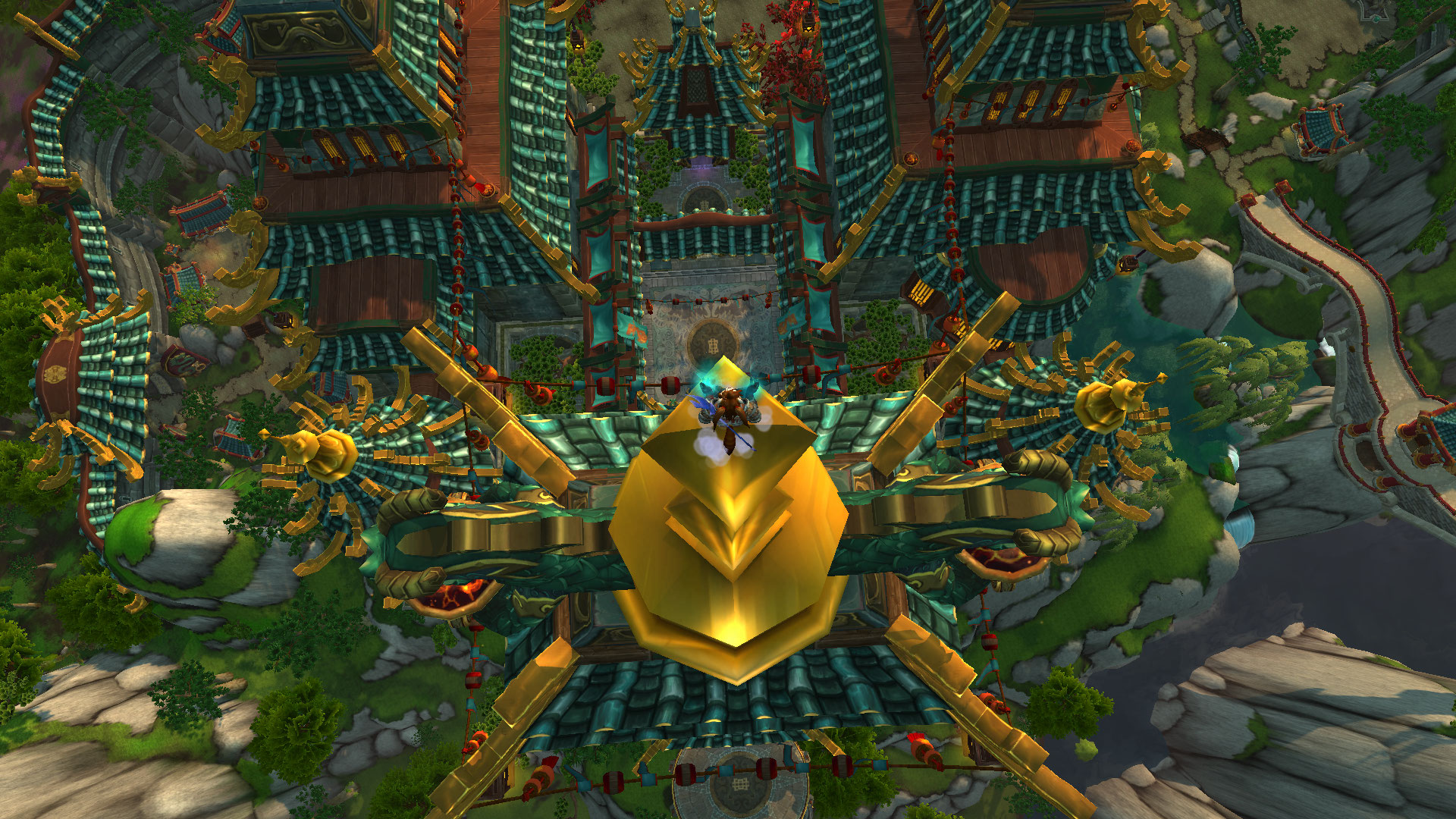 View from the top of the Temple

Blackout Kick no longer applies the dot if used under 50%; it’s just straight up damage. I’m not surprised by this, since that bonus disappeared from tooltips a few patches ago. The DoT also made you feel sort of dirty for using this ability above 50%, even though it was vital to your damage mitigation. Now we don’t even have to worry about it — good riddance!

Everything else is very minor or a tooltip upgrade.

P.S. I’ve also added a few monk blogs in my list of resources — go check them out!