I am tempted to call this dance The Emperor’s New Groove.

So far, I’ve only had the chance to do this fight on heroic. We never got very far, either. But in an attempt to learn how to do this fight properly once the time comes, I am cataloging what I’ve learned. Of course, this guide will be useful to exactly zero people until MoP releases or they decide to test these bosses again. Oh well. At least Google will have plenty of time to rank this post.

The Will of the Emperor is the final boss of Mogu’shan Vaults. During the fight, waves of various trash mobs with different powers spawn, two of which are actual bosses. The tanks each pick up one boss and tank them at opposite ends of the room.

Both of the bosses go through a combo attack, which tanks, and any melee on them, have to perform a little dance to avoid. They perform an animation, and then cleave in a large arc. The location of the cleave depends on the animation. In heroic mode they will do ten (I think?) of these cleaves in a a row.

The bosses can cleave in front of them, behind them, in the center (basically just melee range), to their right, or to their left. You can either look at their swords, the blue strikes, or their feet to figure out where they’re going to cleave. They are huge guys so looking at their feet is usually easier, if less intuitive.

The TLDR is to go where the the back foot stands.

(Please forgive my poor screenshots. These are taken from my fraps recordings.)

Go to: The boss’s right. 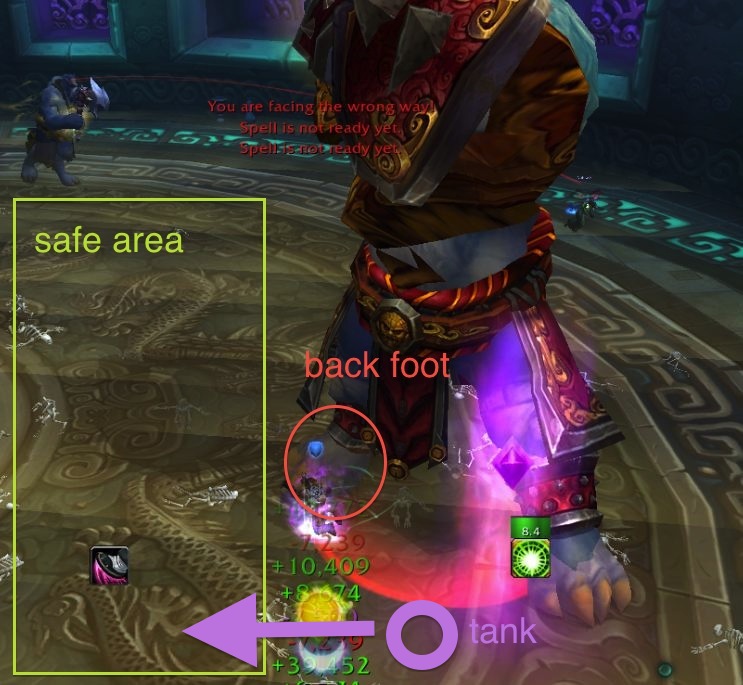 Before the left-side sweep. 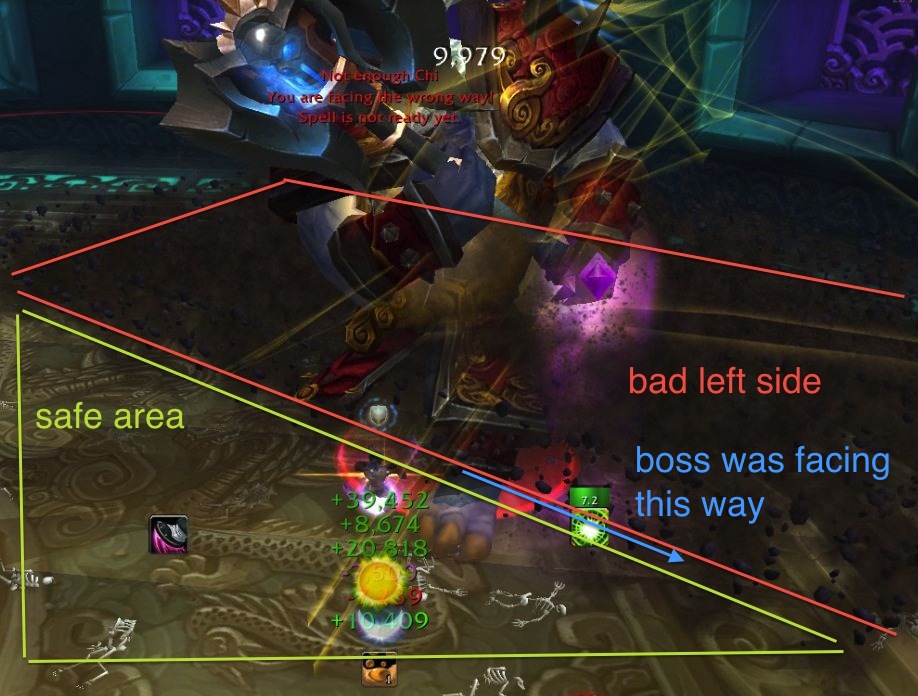 After the left-side sweep. 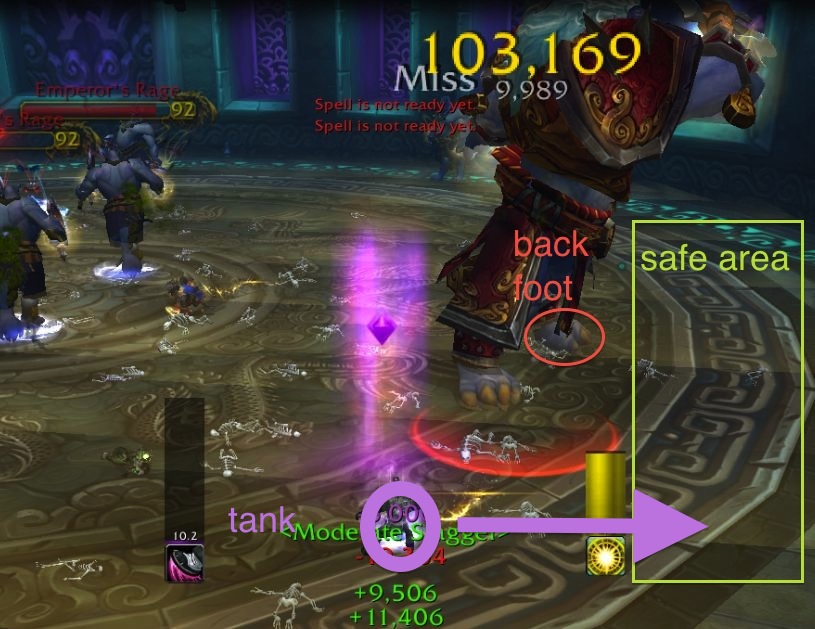 Before the right-side sweep. 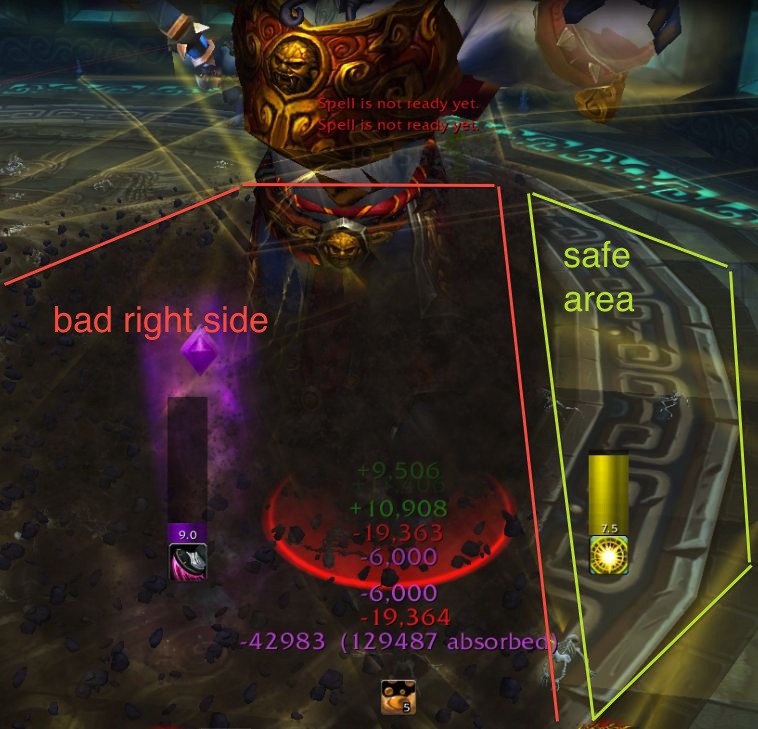 After the right-side sweep. 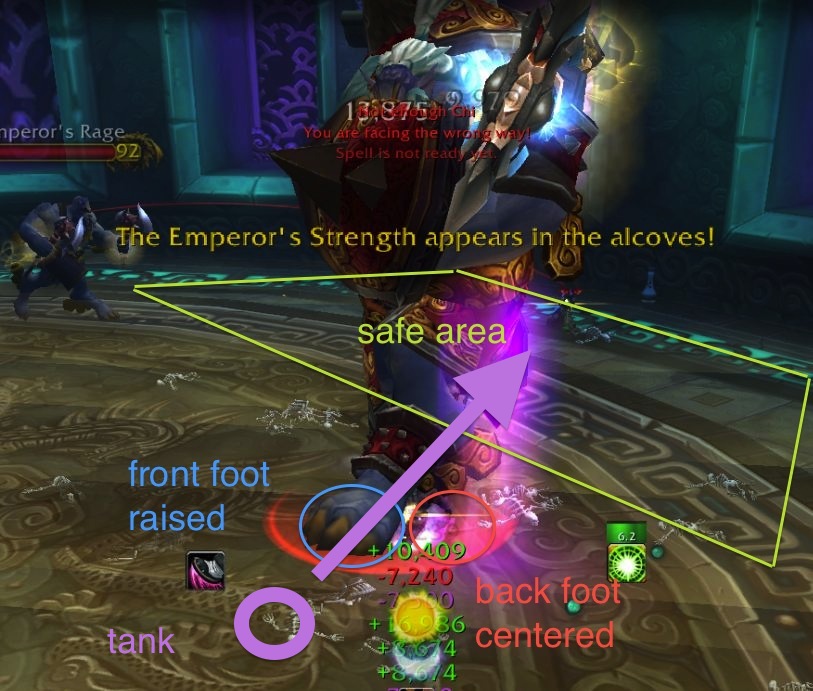 Before the front sweep. 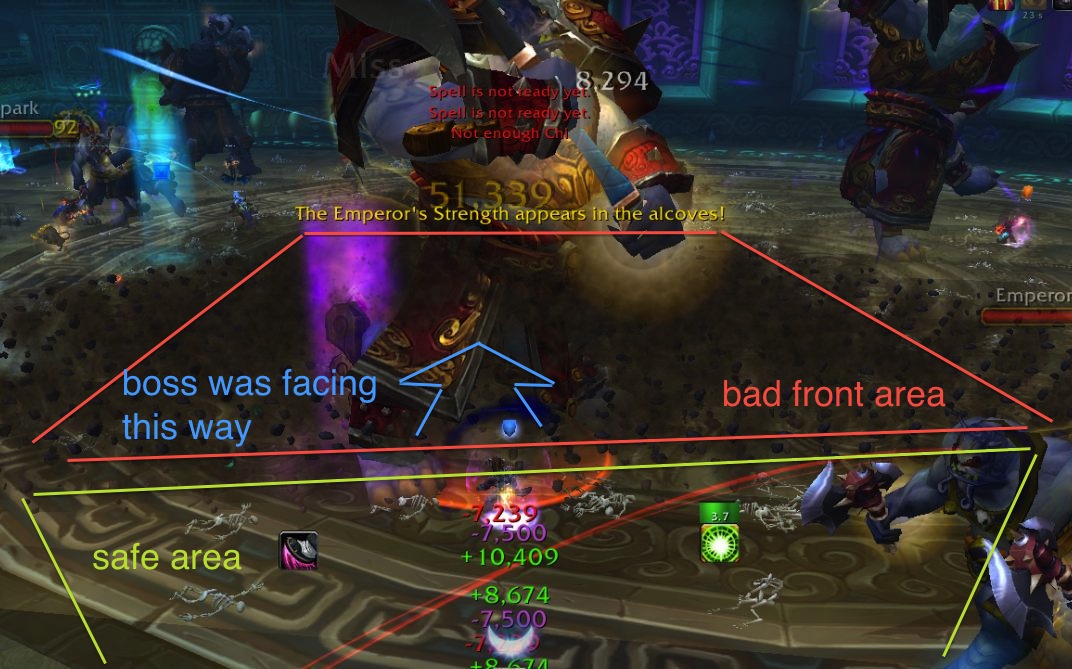 After the front sweep.

Cleave to Boss’s Back

Go to: The boss’s front, move out of melee range. 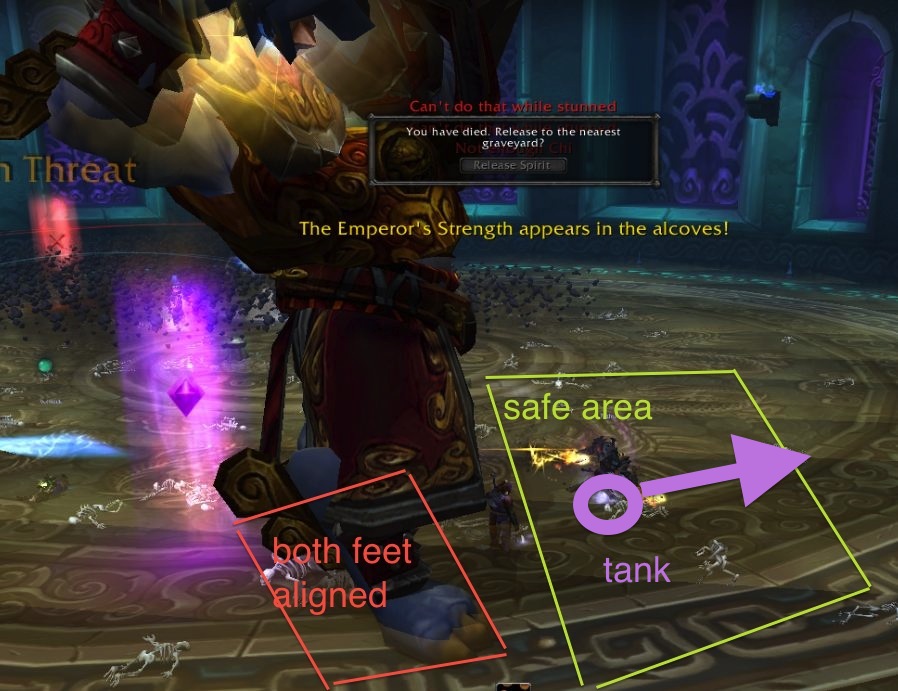 Before the back sweep.

After the back sweep.

Go to: Anywhere out of melee range. 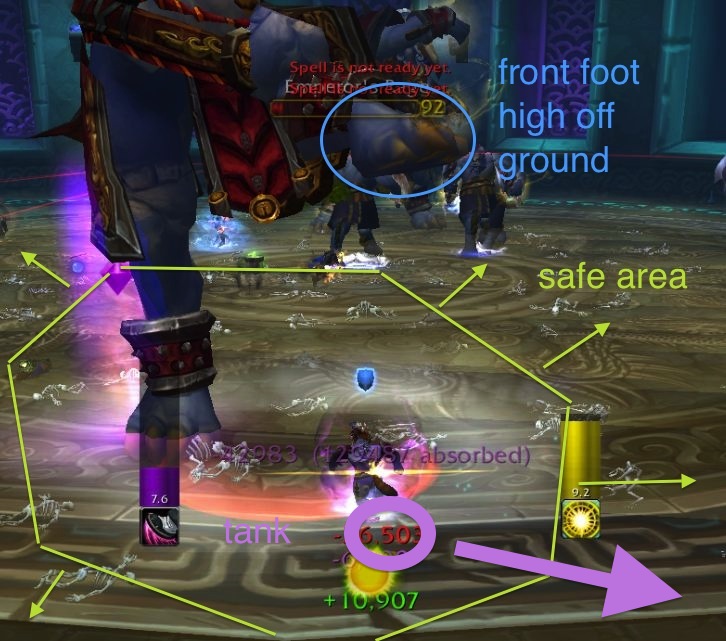 Before the center sweep. 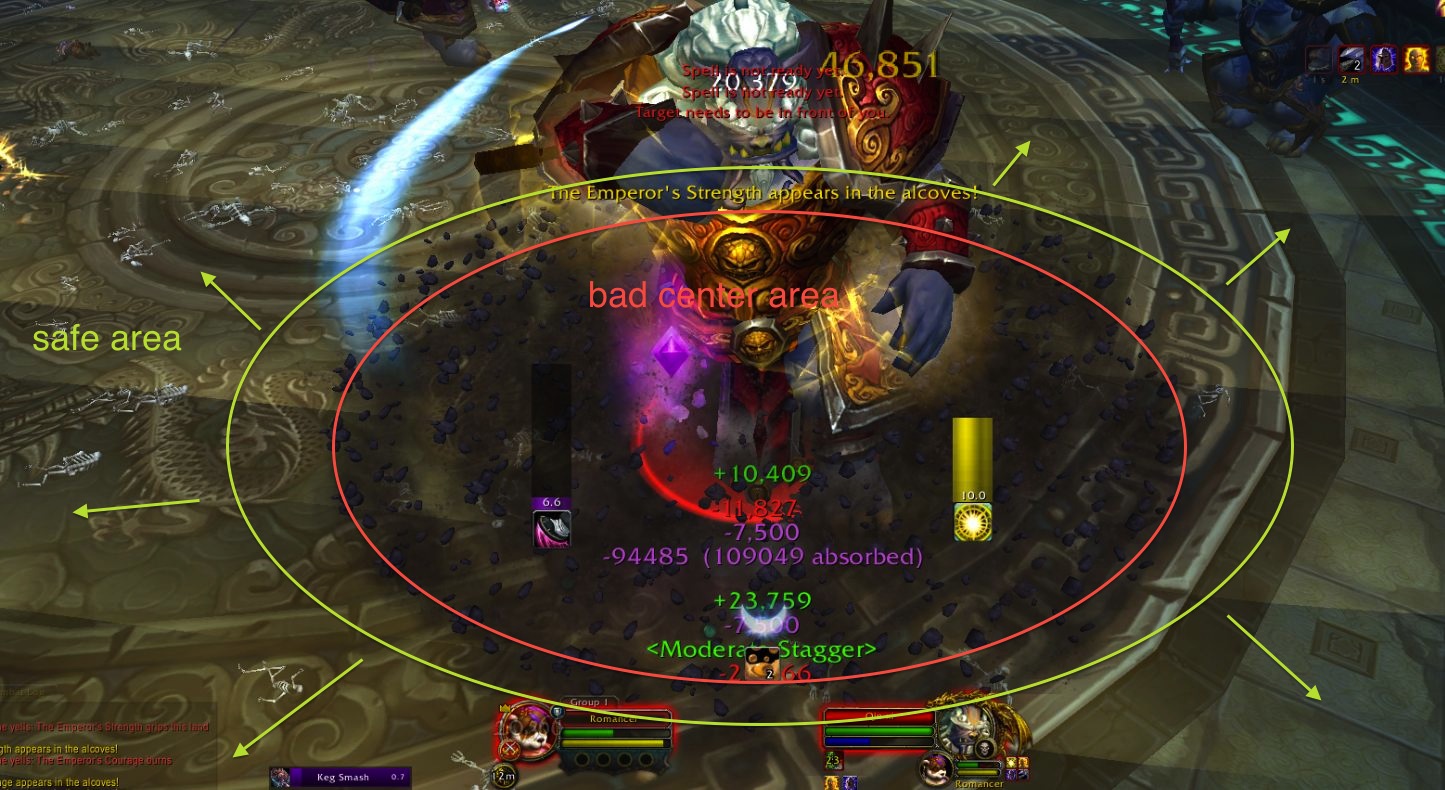 After the center sweep.