The question I get the most often is not “How should I prioritize my stats” or “Can you write this Weak Aura for me”, it is “How do I tank Horridon as a Brewmaster?” There’s no doubt that it’s a difficult fight for most tanks, and monk tanks face their own unique challenges. But it’s also my favorite fight this expansion, explicitly because it’s requires mastery of two basic tank skills: add pickup and predictable damage mitigation.

My own experience for this fight includes: wiping on normal many times before we got it, then wiping on heroic many, many more times. We’ve finally downed it, but it took a lot of experimentation and practice.

Horridon occasionally attacks (as Threehorns are wont to do) with Triple Puncture. Besides dealing moderate damage, it also inflicts his target with a stacking debuff that increases the damage of the next Triple Puncture. In most cases, you will have to take this debuff to 8 or 9 stacks before the other tank has a chance to taunt or a paladin can cast Hand of Protection on you. Horridon uses Triple Puncture roughly every 10 seconds, and the debuff lasts 2 minutes.

So how do you deal with this massive physical burst? First, we need to gear for it. The best stats to smooth your damage intake are mastery and stamina, and you’ll need both. If you often die in the blink of an eye, first try using two stamina trinkets, a stamina flask, and stamina food. If that’s not enough, reforge to mastery (use this priority: hit/exp to cap > mastery > crit > haste). Mastery is becoming an increasingly amazing stat in Throne of Thunder, and it will be useful for most of the other fights in this raid. The one downside is that, unlike haste or crit, it does not increase your damage output. But you should worry about surviving first.

Next, plan out your cooldowns and active mitigation.

One other thing to keep in mind are to watch your vengeance. You’ll have a huge amount of attack power while tanking Horridon — much more than your co-tank on adds. Try not to pull off your co-tank because they have a hard enough time already. Also, if a dinomancer appears next to you, interrupt it.

Finally, when all four doors have collapsed, War-God Jalak will appear. He melees hard, but is not quite as dangerous as Horridon. I’ve heard reports that he is disarmable, so use Grapple Weapon and Ring of Peace on him. Tanking him is pretty straightforward, but once he dies Horridon will hit twice as hard and much faster, so you need to chain cooldowns until the end of the fight, and possibly call for help from your healers.

Picking up the Adds

Add management is one of my favorite tasks as a tank, and sadly it does not appear often outside of five-man dungeons. Brewmasters often have a hard time of it because we don’t have any instant ranged attacks except for taunt, but we have enough tools to make do.

First of all, remember to not panic. The adds that spawn from the door usually don’t hit very hard, so it’s not the end of the world if one of your ranged dps pulls them.

Here are those tools:

These skills aren’t ideal, but good to keep in mind.

Now, keep those in mind while I talk about troll spawn patterns. Each door follows the same pattern, though obviously each group has their own special abilities. Knowing the patterns can help with timing your ranged pulls and plan your taunts.

Spawn 1: One to two troll adds (depending on the gate) come from the door. These guys are stunnable and usually don’t deal much damage. If there’s more than one, they are still close to each other and easy to pick up with just a Keg Smash.

The blue circle represents Horridon and the pink square represents your co-tank. Your guild may choose to put Horridon in a different spot, and that spot may even vary at different gates, but you’ll still have to worry about adds dropping on top of your co-tank. The turquoise star represents where you should stand. 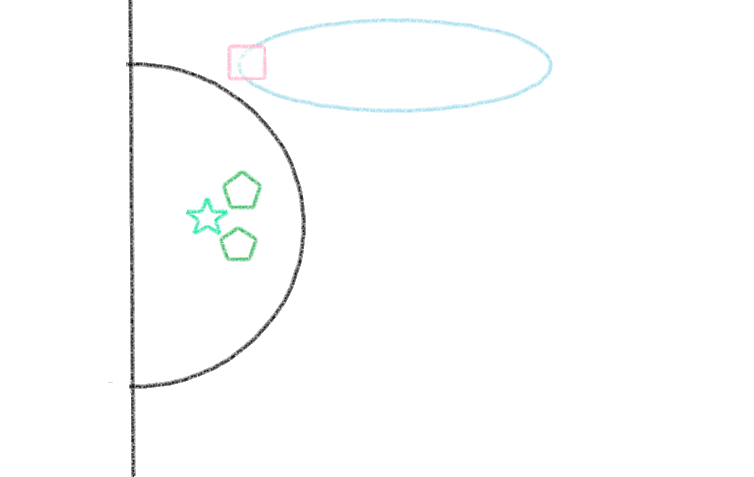 Spawn 2: A single special troll drops from above. These are usually the highest priority targets, so you need to pick them up before a damage dealer pulls it. Since it’s just a single spawn, it should be easy to pick up with your regular attacks or a taunt. 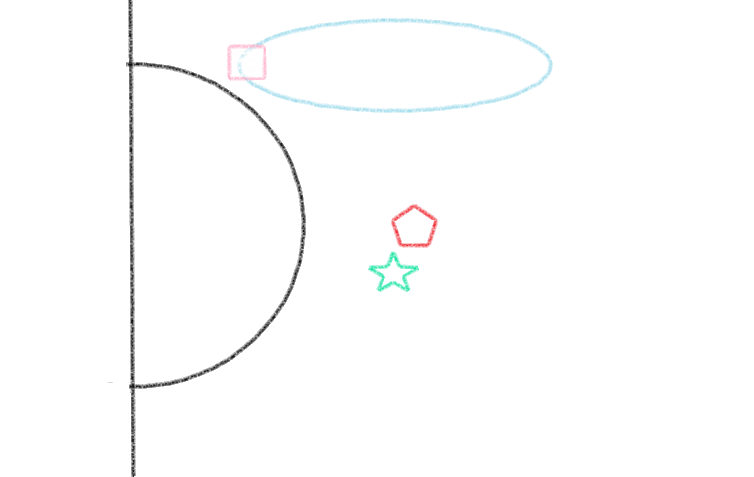 Spawn 3: More trolls spawn from the door. Pick them up with Dizzying Haze. You should prepare for spawn 4 by moving near where they drop down. 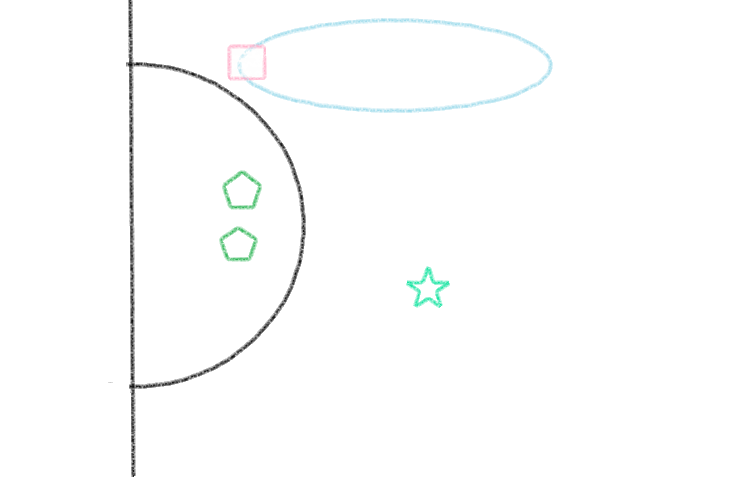 Spawn 3 – One or two normal troll adds, prepare for next spawn.

Spawn 4: Two special trolls drop from above. This is the most difficult pull. First, use one of your best pick up tools (Keg Smash if you’re in range, Rushing Jade Wind if you’re not) on the add the drops near the raid. Second, use your taunt on the add that heads to the other tank. You often have to use a taunt on the add that’s close to your co-tank because none of your other skills will be able to overcome the vengeance lead they have on you, even if you’re Keg Smashing and they’re just doing incidental cleaves. 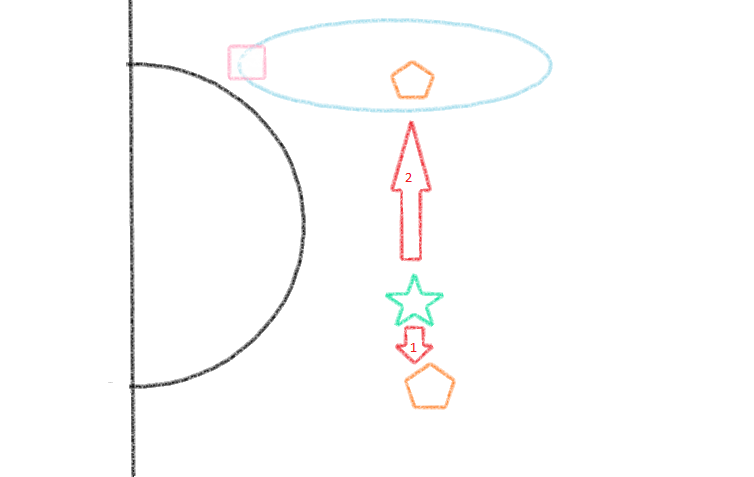 Spawn 5: Dinomancer spawns. If you have to pick it up, then taunt it over. It will likely head for your co-tank, but it’s the last big thing to spawn so you should be safe to use taunt.

Spawn 6+: No more special trolls or dinomancers, but the spawns at the door will continue until Horridon destroys the gate. Continue to throw Dizzying Haze at them when you see them run out the door.

Gate 1 – Desert Trolls: The basiliks that spawn from the gate can stun you. You can either interrupt their cast, run behind them, or break the stun with Nimble Brew. Stay out of the sand on the ground.

Gate 2 – Poison Trolls: Try to pick up the green, semi-transparent Venomous Effusions. There’s usually many mobs up, so it’s not worth it to taunt unless you can do an AoE taunt off your statue.

Gate 3 – Ice Trolls: You only need to pick up the Frozen Warlords, but you can use your AoE taunt to pick up other mobs momentarily. Warlords hit very hard and apply a healing debuff, so this is a good time to use cooldowns as well. Also, kite them along the wall so that they drop their Frozen Orbs away from the raid.

Gate 4 – Bear Trolls: The bears cleave, so don’t move around too much and keep them facing away from the raid. Once the bear dies, its rider will drop and you’ll have to reestablish aggro. A well-timed Spinning Crane Kick will usually do the trick.

Here are the talents I chose.

Transcendence is very useful for this fight. You can either drop it on various spawn spawns for fast pick up, or near the boss in case you get targeted by Charge.

You will have to replace your Ox Statue at every gate due to range. You can place it within the gate semi-circle to help with AoE taunts or just a distraction for those adds, or you can place it where one of the special adds will drop down.

In heroic mode, the boss will occasionally spawn a Direhorn Spirit. As a tank, you don’t have to worry about this until the very end. If you do get one, you can knock it back with any attack, including taunt. I preferred to occasionally throw a Dizzying Haze or Rushing Jade Wind at it because I was worried I’d accidentally taunt the boss.