I’ve spent a lot of time this tier experimenting with stat combinations. On the surface, not much has changed. Mastery received a slight buff and haste got a subtle nerf when the healing talents became free, but nothing huge. However, the inclusion of many physical, bursty fights has give us Brewmasters much to consider regarding our secondary stats.

These are my gearing decisions, based on experimenting, browsing logs, theorycraft, and the input of other brewmasters. As is always the case with brewmasters, there aren’t many wrong ways to gear yourself, but there are good places to start, especially if you’re struggling or just looking for some guidance.

Progressing through normal and heroic Throne of Thunder, it’s easy to see what the big killer of tanks is: physical burst. Usually it’s predictable, along the lines of Horridon’s Triple Puncture, though often a boss’s regular melee attacks are deadly, too. This typically means we need more health smoothing, which are traditionally the job of mastery and stamina.

However, the additional 12% stagger linked to Elusive Brew from our two-piece bonus also contributes to damage smoothing. It’s a bit less reliable, but often stronger than base mastery. If we were to prioritize crit, that could potentially aid in smoothing by increasing the uptime of the Staggering buff. That, plus the total damage reduction that comes from Elusive Brew’s dodge and the damage bonus, makes crit seem like the clear winner.

I spent the last three or four weeks (and about 10k gold) experimenting with mastery/stamina priorities and crit priorities. Crit clearly provided the best total damage reduction and dps, but the problem remained: I was still dying. The Staggering bonus proved to be not so easy to control, even with a macro to cancel Elusive Brew early. My guild was wiping because I couldn’t survive an unlucky string of hits, not because the healers ran out of mana healing me or because we hit the enrage. This experiment only proved what we’ve known all along: total damage reduction looks good on paper, but it’s not reliable and it’s not going to fuel progression.

And somewhat reluctantly (though that quickly passed), I crawled back to stamina and mastery. Nothing beats the reliability of an always-on damage smoother and good ol’ maximum health.

Smoothness is all the rage

Around this time, Theck released his blog post on the smoothing effects of stamina. It’s written for paladins, but the ideas often translate well to other tanks. Specifically, he reiterates the effect of healer reaction on keeping tanks topped off. A tank with spiky health causes healers to panic and use expensive, fast heals. Therefore, to best work with our healers, we tanks should increase that buffer (i.e. maximum health) so that they can continue healing us with their normal hots or smart heals.

Now brewmasters are going to approach this a little differently. Unlike paladins, we actually have a secondary stat that has a near identical function to stamina: mastery. Not only is it always “on”, but it reduces damage — something stamina does not do. But how does it scale in comparison?

A while ago, Taser on the EJ forums actually did a rough [analysis of that very question](http://elitistjerks.com/f99/t131791-like_water_brewmasters_resource_4_2_13_a/p11/# post2255321). Read the full post for details, but it essentially boils down to this: mastery will soon surpass stamina as the best stat for time-to-live. The most interesting conclusion is that mastery scaling is akin to armor penetration in days of (c)old — the more you have of it, the better it is. There’s no built-in diminishing return.

There are some details that shouldn’t be left out of this understanding. First, stamina will always be superior in fights with mechanics that aren’t mitigated by stagger (magic, dots, etc). Second, it’s not a linear scale, so 10,000 mastery is more than twice as effective as 5,000 mastery. This means that if you prioritize it, you should go all out.

Finally, even the best tanks around suggest survival stats, at least while you’re learning new encounters. At this point, not only has my own experimentation demonstrated that stamina and mastery are the way to go, but a bandwagon is forming.

That’s cool and all, but please just tell me what to do

Gem for hit / expertise, then mastery / stam. Hit and expertise are useful no matter what secondary stat priority you’re following, so gem for those first so that you’re free to reforge into other stats later. Personally, I’ve stopped gemming for hit because in my current gear I’m actually at risk of going over the cap, even after reforging. Because gems provide double secondary stats, after caps it’s best to focus on mastery. A little bit of stam isn’t bad if you’re already hit capped and you need a blue socket filled.

As always, I like to meet the socket bonuses because the stats are almost always useful for brewmasters. Far more importantly, the anguish I experience at seeing a missed socket bonus is not worth the small stat gain.

Reforge priority: This is pretty straightforward since I’ve been implying it throughout this article. Reach your caps, then mastery. I’m not a huge haste fan because I’m always pooling energy anyway, and I like the synergy crit provides with our tier 15 bonus, which is why it comes after mastery. However, feel free to swap those two stats if you just can’t live without high energy regen.

For pure survival, we want either stamina or mastery trinkets. I will do an in-depth trinket comparison in the future, but for reference here are the contenders:

Lao-Chin’s Liquid Courage and Jade Warlord Figurine are good places to start. Soul Barrier is the best if you have it.

That’s good! Your healers know their styles better than I do, and if you’re not struggling with your current set up there’s no real reason to change it around. I simply want to encourage mastery and stamina, as stats traditionally neglected by brewmasters, for those of us who are struggling or need guidance.

Other reasons that you might want to avoid a damage smoothing set up are: 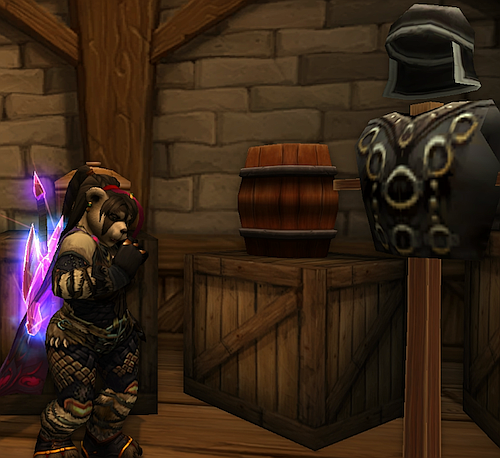