Our final tier of talents specialized in AoE damage, specifically the magnitude and frequency of that AoE damage. In the beginning of the expansion, Rushing Jade Wind was an entirely different talent. It was an aimed AoE burst skill that also increased the damage of Spinning Crane Kick. While not a useless skill, it was very situational, and given the absolutely uselessness of Chi Torpedo for non-healers, we were given a more competitive choice in the form of today’s sustained AoE RJW. 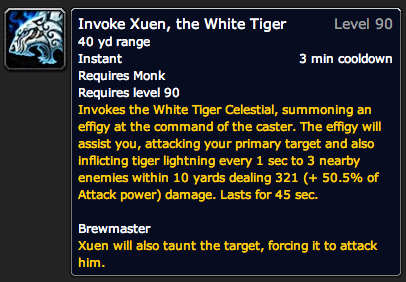 Xuen was typically the default choice, especially early in the expansion, because it provided solid AoE and single-target dps. They later gave us more control over the summoned tiger, and made him a bit of an offtank, but his value has always been that dps boost. Xuen provides a huge amount of cleave damage, making him a smart choice for fights with infrequent AoE groups. 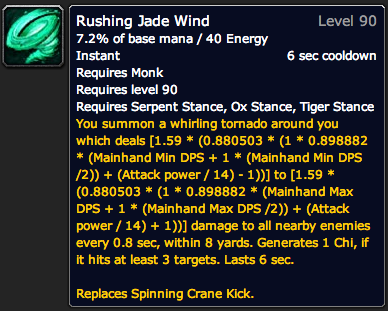 Rushing Jade Wind’s original form gave it the very specialized use case of semi-frequent AoE groups with some sustained AoE damage in the form of buffing Spinning Crane Kick. While useful for pulling and kiting, Rushing Jade Wind did not see much use. For Siege of Orgrimmar, it was redesigned to replace Spinning Crane Kick and deal AoE damage while also allowing you to continue doing the rest of your rotation. That change revolutionized AoE tanking for Brewmasters, making it easier for us to pick mobs up, keep our defenses active, and allow us to deal even more AoE damage. 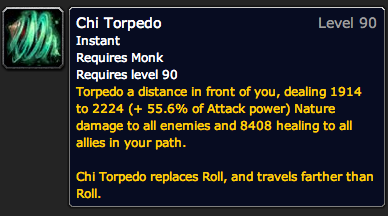 The healing and damage are actually pretty good with this talent, but it still remains the single least-used talent in the entire tree for Brewmasters (just guessing there, but it sounds true). Its key weakness is that we have to move quite a bit to use it. We like to roll and we like to raid heal, but doing both together while tanking (and thus spinning the boss around) isn’t ideal. In addition, it doesn’t deal nearly as much damage as the other two. You’d think that the additional raid healing would be a viable tradeoff for dealing less AoE damage, but sadly WoW raiding rarely leaves room for a dps loss like that.

In their current incarnations, Xuen and Rushing Jade Wind are fascinating and often subtle choices. Both are used for AoE, so you have to identify just what type of AoE damage will be more useful to your group. Sadly, Chi Torpedo is left in the dust. A choice between two out of three talents is okay, though obviously I’d rather have all three be valid.

An aspect of Rushing Jade Wind that saddens me is that it completely overshadows Spinning Crane Kick. Any situation were we use lots of SCK is a prime candidate for choosing RJW instead. I think we still get some decent opportunities to use SCK for Xuen fights, but it is a little sad to see a signature monk ability relegated to “only use if I absolutely have to”.

To fix Chi Torpedo, we would have to unshackle it from roll (so we don’t have to commit the unforgivable tank crime of spinning the boss every 12 seconds). The damage and healing are fine (well, the healing will be much less on other people come Warlords), it’s just so awkward to use. I’m not even sure that would be enough, since we can usually depend on our healers to do sustained AoE healing. I still don’t think Chi Torpedo would be tempting for high end raiders, even if it was just a frequent burst of moderate damage and healing. Xuen and RJW just deal so much more AoE damage. Maybe we’d have to replace Chi Torpedo with something else entirely.

What are other differentiations in AoE do we have? Xuen provides burst AoE, RJW provides sustained AoE. Both are “fire-and-forget” spells, so maybe something that requires maintenence but deals more damage overall? Chi Explosion is actually more similar to these two, in that it’s a single and multi-target dps increase, so maybe something along those lines. We could also focus this tier more on general dps, and have a strong single-target skill in that spot.