This is what I’ve gathered from scouting around the internet and from personal experience about Sinestra, Consort of Deathwing, the unlockable heroic-only boss at the end of Bastion of Twilight. As with most my guides, this is from a tanking perspective, though I try to include as much non-tanking aspects as I can. 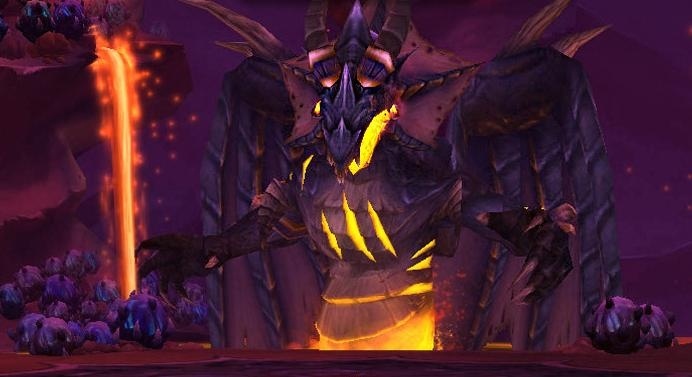 She’s pregnant, stuck in lava, and you’re threatening her babies. You’re in for a world of hurt.

END_OF_DOCUMENT_TOKEN_TO_BE_REPLACED

I started out my MMOing career with free-to-play games, commonly abbreviated as f2p. Actually, it probably went more like chat rooms -> Neopets -> free MMOs, but I’m not here to talk about internet creepers or angel paintbrushes. I think I started playing MMOs about a year before WoW came out, and then well into the first two years of its existence. The last two years of high school were spent with my face buried in a CRT monitor, burning away six to eight hours a day grinding in these games (high school is a weird time for most people). Thanks to that, I’d like to think I know (or knew) a bit about hardcore f2p MMOs.

END_OF_DOCUMENT_TOKEN_TO_BE_REPLACED

This is actually a pretty easy fight once you get the hang of it. Your raid needs to stay alive as long as possible to because there are numerous abilities that have damage that needs to be split.

END_OF_DOCUMENT_TOKEN_TO_BE_REPLACED

Even with the upcoming changes to Swipe, I still believe that bears are way too weak at low levels. Their passive and active defenses are frighteningly low, and they have very few tools to do the job until later in the game. In this post I will compare the rate druids learn tanking skills to the rate other tanks learn them, and show exactly where low level druids fall behind.

END_OF_DOCUMENT_TOKEN_TO_BE_REPLACED

Quite a few people have asked me about this, so maybe the world needs to know!

END_OF_DOCUMENT_TOKEN_TO_BE_REPLACED

Do you ever feel bad for the bosses you ruthlessly slaughter each and every week? I started thinking about this while we were waiting to pull Atramedes. This blind dragon has quite a history. In case you haven’t seen his introduction, here’s a youtube video and a transcript:

END_OF_DOCUMENT_TOKEN_TO_BE_REPLACED

Today I’m going to look at tanking cooldowns. This is not supposed to be an argument over who has the best cooldowns or who is overpowered or blah blah blah. This is a learning exercise so that everyone can better understand their tanking teams. Remember that cooldowns are not balanced in a vacuum; Blizzard takes everything into account when they balance tanks, not just your damage reduction cooldowns.

All pictures are from Wowhead.

END_OF_DOCUMENT_TOKEN_TO_BE_REPLACED

In this video and our first kill, I was brought as cat dps. My kitty gear is primarily bear gear, so my dps was pretty low. The fact that I was in on our first kill should indicate that this is not a dps fight; it’s a control fight.