My boyfriend and I planned to spend the entire weekend glued to our computers playing Guild Wars 2, and we did just that. We ordered food, prepared some Arnold Palmer (a few years ago this would have been replaced by energy drinks, but I’m now old enough that energy drinks don’t appeal to me anymore), and did nothing except play GW2 and sleep. We ended the weekend tired and greasy, but eager for launch. I’m pretty excited for this game, more excited than I am for Mist of Pandaria. Even though it lacks end game PvE.

I have a couple of posts planned for delving deeper into the game, but here are my first impressions.

We leveled to 23 and finished most of the available PvE content for charr. We did some organized PvP and a day or so of World vs World vs World (WvW). I played an elementalist and he played a guardian. 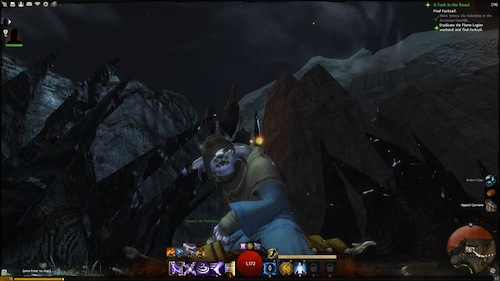 At first I thought this hat was dumb but then I realized it was lopsided and adorable.

I love the charr and everything about them. Boy charr look more canine/beastial and have a single tuft of hair at the ends of their tails; girl charr look more feline and have completely furry tails. They get down on all fours when they run, which feels like you’re going super slow but it’s awesome anyway. 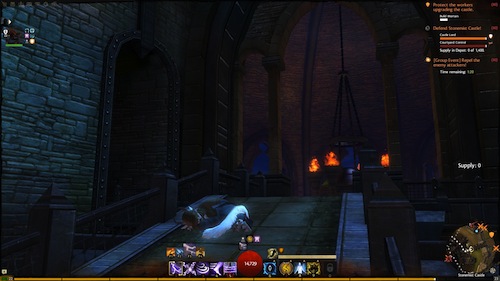 Such a luxurious tail.

The character creation is pretty detailed, and you can choose your character’s physique which is neat. Hair and clothing actually have physics (so when you jump or spin, it moves). I wish female charr got more horn options like the males.

After the introduction quest (which takes less than 10 minutes), you’re dropped into the world and told to basically explore. Exploration is a real strong point of GW2, but it’s scary at first. Just know that you’ll get used to it, and it will become less scary over time.

Difficulty ramps up pretty quickly. This is a good thing; it makes leveling truly engaging and requires using all your tools to accomplish most things. It’s a good teaching tool, though it risks scaring some people away at the start. Some things can be solo’d, but are quite a few events that need two or three people. This works out fine in the initial rush, but I worry about how it will feel if you’re leveling a character a few months after launch and no one is there to help you. One thing to remember is to not get discouraged if you die a lot. Everyone does at the beginning and you will improve quickly.

Dodging is key to survival. The default keybinding is to double tap your movement keys (WASD) but I found this was not the easiest method, so I moved it to a free button on my Naga mouse. Dodging moves you around at normal run speed but makes you immune to damage during the animation. It’s much easier to dodge when you’re attacking something at ranged.

Your only traditional quest is your personal story. Your story starts out based on a few choices you make at character creation (like what legion your charr belongs to: iron, blood, or ash, who is your daddy, etc). I don’t think it’s affected by your profession (profession = class). My boyfriend and I both played charr, but he started out as Blood Legion and I started out as Iron and we had completely different stories. Maybe they converge at some point, but they hadn’t by level 20. 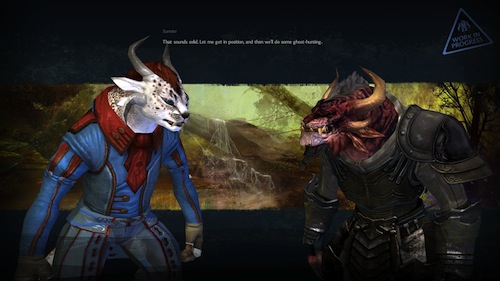 I am a cat wearing a neck tie!

The rest of your leveling is done by exploring. You can go look for a heart on your map and do normal quest-like things there. An npc doesn’t tell you to go kill 10 bad guys, you just do it in their area and fill up a bar. Usually there’s a handful of things you can do to fill up that bar (e.g. kill separatists, destroy their catapults, free captured charr). It’s very similar to traditional questing except you get to choose what to do. Once you fill the bar up, you get some PvE currency (karma), a chunk of exp, and mail from the “heart” npc with some money. The heart npc also becomes a vendor where you can spend some karma on simple gear upgrades. Most heart npcs offer different items, so it’s good to unlock most of them if you can. 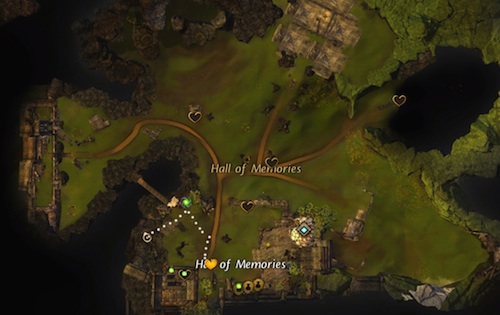 Dynamic events are different from hearts. Sometimes they happen in the same area as a heart or will contribute toward filling the heart bar, but not always. It took me awhile to realize this, but if you want dynamic events you should explore the “points of interest” on the map. The points of interest don’t always have something going on, but events will happen there occasionally. 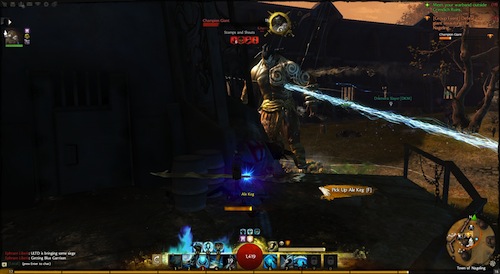 This giant would one shot any melee so we and a couple other people had to fight him from ranged. He also AoE feared and whenever he came rushing toward you it was terrifying.

Going out on your own is fun simply because you might run into another player. They really encourage you to work together. You don’t need to party because parties in this game are nothing more than ways to communicate with each other. Kill stealing doesn’t exist, as you both get a chance at loot and you get experience depending on your contribution. It works surprisingly well.

If you see an interesting nook or wall that seems scalable, you should try to explore. You’re rewarded for an astounded amount of just looking around. Sometimes there’s treasure at the back of a cave, or even something cool like a skill point or an event. My boyfriend got an achievement for jumping to the top of a tower (I tried but wasn’t patient enough to jump all the way to the top). It feels like you’re glitching the environment or something, but it’s okay you’re supposed to do that. 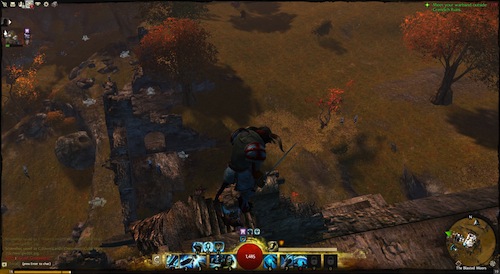 You unlock weapon skills by using that weapon set. In WvW, you can only unlock by casting on player characters, so it goes really really slowly there and I wouldn’t recommend it. The final weapon skills of defensive skill sets took me forever and it was a little frustration to hamstring my leveling because I needed the final skill of earth attunement with a focus and only had autoattack to deal damage.

Most of your skills are utility skills. Sometimes you’ll have a weapon set/element attunement that provides a second dps skill, but it’s rare. Many of your utility skills still do damage.

Melee generally hits much harder than ranged, but it’s more difficult to dodge bad stuff and kite. This is a decent trade off for PvP, but a melee going up against an elite PvE monster is a dead melee.

Almost everything has voice acting. Only your personal story has a full blown conversational cutscene (like SWTOR), but events and heart npcs will talk to you and each other.

I don’t really see the point of being in a downed state other than increasing tension in PvP. If you die and nothing is attacking you, you can res yourself which is nice. Most of the time I’d just completely die. Not that I think this is a pointless mechanic, because it isn’t, but it’s not all that exciting either. I only once killed a mob while in a downed state (which resses you).

Elementalists are lovely and colorful, though they’re one of the only classes that can’t switch weapons in combat. Limiting yourself to a single weapon can be difficult, mostly because of the melee vs. ranged stuff. Your compensation is that you can switch between elemental attunements, though attunements are usually different flavors of the same toolkit. GW2Tools is a really good site for getting the gist of weapon skills and other ways to customize your character. Here is how I categorize an elementalist’s skill set: 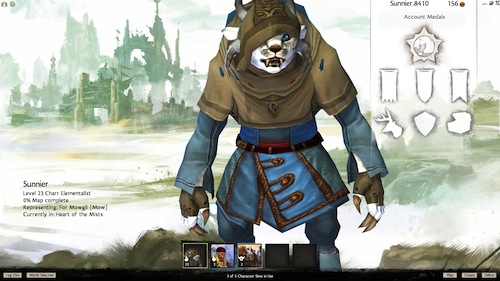 World vs. World vs. World (WvW for short) is like Wintergrasp x 1000. Dying is brutal because you have to run from far away. You spend a ton of time running, but when you kill someone on the opposite team they won’t be coming back any time soon. If your server has a leader, then you’ll probably be very successful. 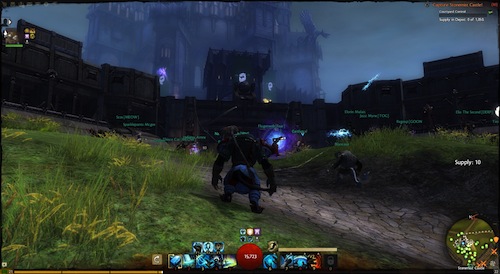 The big castle in the middle is like the flag in Eye of the Storm. All the action happens there but you shouldn’t actually care about it.

I had a hard time finding the entrance to WvW, and I think it could be a bit more intuitive. To get to WvW, open your character pane (“h”), click on the PvP tab, click the “Enter the Mists” button. This will teleport you to the mists, which is like a PvP staging area. From there you have a little tutorial area which takes like 2 min and is easy to skip, you go through the portal at the opposite end of the tutorial, then you enter the true PvP staging area, where you veer to the left and will hopefully find a portal that says something about WvW. There are many portals in that area, be sure to pick the WvW one. 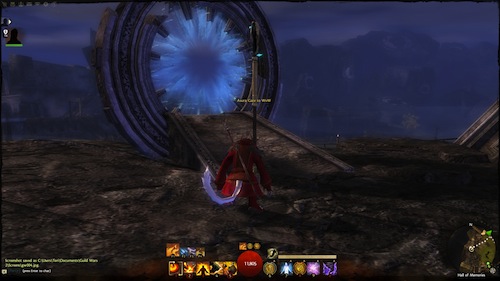 This little tiny pole has the directions.

I adore the UI. They put all the stuff that’s important to you in the middle and on your character, which means most of your eyeball time is spent looking at the field instead of your buttons. Debuffs don’t actually appear as icons, but instead the edges of your screen light up different colors. There’s also usually a large visual effect on your character, like giant chains if you’re immobilized.

Dying has pretty high consequences. Your equipment gets damaged (costs money to repair), you have to teleport to a waypoint (sometimes costs money), and the waypoint is usually pretty far away. To be fair, it’s not much money, but if you make a habit of dying a lot (happens many times in WvW), it just adds more frustration on top of the frustration of dying. If you die in WvW, your best bet is to just stay dead because it’s faster and easier to go afk for 5 min waiting for some helpful stranger to resurrect you than it is to run back from a waypoint. 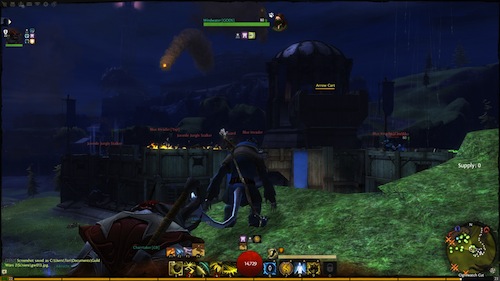 Buffs are called “boons” and have very short durations, usually less than 10 seconds. They do things like increases run speed or increase your chance to crit. You don’t have any buffs like Mark of the Wild that stay on you for an hour, instead they’re more like procs that you need to time.

Control is much more short term than WoW (they last for 2 to 5 seconds usually). The only thing that completely takes you out of the game is fear and maybe stun, though I don’t know if I was ever stunned. You can get feared off of cliffs and die from falling damage (hope this is a bug).

PvP is very slow. That’s not a bad thing, but it takes some getting used to. In WvW, a low health profession has around 15k health, and auto attacks deal anywhere from 700 to 150 damage a hit. On top of that, every profession has a heal and their own survival tools.